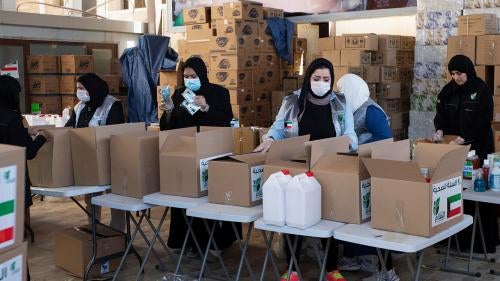 Kuwaiti authorities continue to use provisions in the constitution, the national security law, and the country’s cybercrime law to restrict free speech and prosecute dissidents, particularly focusing on comments made on social media.

Once a leading actor among its Gulf neighbors for the passing of the 2015 domestic workers law, Kuwait is now falling behind on reforming its kafala (sponsorship) system, which leaves migrant workers vulnerable to abuse and forced labor.

The Bidun, a community of stateless people who claim Kuwaiti nationality, remain in legal limbo while the government resorts to coercion and penalizes peaceful community activism.

Kuwait continues to allow Human Rights Watch access to the country, unlike many of its Gulf neighbors, and engaged in dialogue on a range of human rights issues.

Kuwait had over 100,000 confirmed cases of Covid-19 and 600 deaths by October 2020. The government imposed several restrictive measures, including a nationwide lockdown in March. The closure of schools affected the education of 800,000 students. Bidun children who are already socially marginalized, have reportedly a more difficult time accessing devices for online education.

Authorities prosecuted activists using penal code provisions and other laws that criminalize speech deemed insulting religion or the emir, or critical of neighboring countries. The 2015 Cybercrime Law expanded these restrictions to cover speech on social media platforms, particularly on Twitter.

In 2020, the Ministry of Interior’s cybercrime department interrogated or arrested at least five activists and human rights defenders for comments on their Twitter accounts, including journalist Abdulaziz al-Shaban, the blogger behind an account called the “Marxist Patron of People,” and Hani Hussain, a human rights lawyer.

On July 20, the Court of Appeal sentenced Nasser al Duwailah, a former member of parliament, to six months in prison and a fine of 2,000 Kuwaiti Dinars (US$6,500) for insulting the United Arab Emirate on his Twitter account. A criminal court had previously acquitted him on charges stemming from a complaint filed by the UAE’s attorney general.

On August 19, the parliament amended the media and publication law to lift the Ministry of Information’s authority to decide whether a book could be imported.

Two-thirds of Kuwait’s population is comprised of migrant workers, who remain vulnerable to abuse.

As a result of the Covid-19 pandemic, many migrant workers found themselves dismissed without their wages, trapped in the country unable to leave due to travel restrictions and more expensive flight tickets, and increased risks of abuse by employers due to lockdown restrictions that left them confined to employers’ homes.

Authorities issued an amnesty during April allowing migrant workers who overstayed their visas or were otherwise undocumented to leave the country without paying overstay fines and free to re-enter in the future. On July 7, al Qabas online newspaper reported that the Public Authority for Manpower had annulled all absconding cases lodged since the start of the pandemic. According to the paper, the decision came after the Public Authority’s investigations revealed that many employers filed false absconding cases to sidestep their legal obligations to pay wages, or to provide food and accommodation.

The Bidun comprise between 88,000 to 106,000 stateless people who claim Kuwaiti nationality, dating back to the foundation of the Kuwaiti state in 1961.

Claiming that most of the Bidun moved to Kuwait from neighboring countries and hid their other nationalities to claim Kuwaiti citizenship, the government refers to them as “illegal residents,” resulting in obstacles to them obtaining civil documentation, receiving social services, and impairing their rights to health, education, and work.

The Central System for the Remedy of Situations of Illegal Residents, the current administrative body in charge of Bidun affairs, has been issuing temporary ID cards since 2011. The process of determining applicants’ eligibility for services and whether they hold another nationality remains opaque. The ID cards issued to Bidun in recent years often state that the cardholder possessed Iraqi, Saudi, Iranian, or other citizenship, but it was unclear how the agency determined the individual’s alleged nationality and what due process procedures are available for Bidun to challenge the Central System’s determination.

Article 12 of the 1979 Public Gatherings Law bars non-Kuwaitis from participating in public gatherings. On January 28, Kuwait’s Fourth Circuit Criminal Court sentenced two Bidun activists to 10 years in prison and another in absentia to life in prison after they had organized a peaceful sit-in in the town of al-Jahra, near Kuwait City. Authorities arrested the two along with 12 other activists who were acquitted in July 2019. The charges included incitement to overthrow the government; publishing information on social media to incite violations of laws, and intentionally misusing means of communication.

Kuwait’s personal status law applies to Sunni Muslims, who make up the majority of Kuwaitis, and discriminates against women in matters of marriage, divorce, and child custody, including a stipulation that women need male guardian permission to marry and should obey their husbands. A man can prohibit his wife from working if it is deemed to negatively affect the family’s interests. The personal status rules that apply to Shia Muslims also discriminate against women. Kuwaiti women married to non-Kuwaitis, cannot pass citizenship to their children or spouses, unlike Kuwaiti men.

In 2019, Human Rights Watch spoke to women survivors of domestic violence who explained barriers to seeking protection from the authorities, including cases where police did not respond to their appeals or attempted to send them back to their abusers. The lack of a domestic violence shelter meant that many had nowhere to escape to from abusive homes. Discriminatory divorce laws mean that it can take years for women to obtain a divorce even when they have faced abuse. Kuwait, unusually, does not have any established shelters for adult victims of domestic violence in the country.

In September, there was outrage following the killing of Fatima al-Ajmi, a pregnant woman shot by her brother while she was in the hospital because he disapproved of her marriage—even though her father had approved it.

Women’s rights activists complained that existing legal provisions that justify the murder of women encouraged such behavior. Under article 153 of the Kuwaiti penal code, a man who finds his mother, wife, sister, or daughter in the act of adultery (zina) and kills them is given a reduced sentence of either a small fine or a maximum three-year prison sentence. Under article 182, an abductor who uses force, threat, or deception with the intention to kill, harm, rape, prostitute, or extort a victim is spared any punishment if he marries the victim with her guardian’s permission.

The penal code criminalizes sexual relations outside marriage, and article 193 punishes consensual same-sex relations between men by up to seven years in prison. Transgender people can face one year in prison, a 1,000 Kuwaiti dinar fine ($3,293), or both, under a 2007 penal code provision that prohibits “imitating the opposite sex in any way.” Transgender people have been subjected to arbitrary arrests, degrading treatment, and torture while in police custody. In July, a video of Maha al-Mutairi, a transgender woman who was summoned for “imitating women,” caused a domestic and international outcry. According to her lawyer, during her detention, she was spat on, verbally abused, and sexually assaulted before authorities released her after three days without charge.

Kuwait is a member of the Saudi and UAE-led coalition that intervened militarily in Yemen. Kuwait has not responded to Human Rights Watch inquiries regarding what role, if any, it has played in unlawful attacks in Yemen.