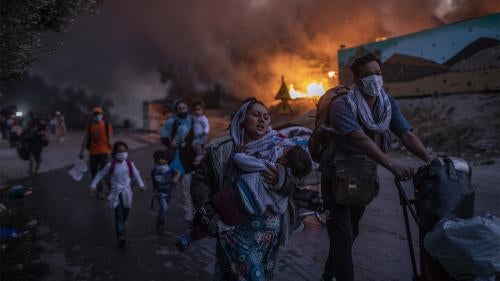 In October, the leadership and multiple members of the neo-Nazi Golden Dawn party were convicted of running a criminal organization. Greece continued to host large numbers of asylum seekers while failing to protect their rights. Thousands are confined to the islands in abysmal conditions amid the Covid-19 pandemic under discriminatory lockdowns. A new law limits asylum seekers’ access to protection. Unaccompanied children are often held in police custody or detention. Civil society organizations face legislative restrictions, while nongovernmental organizations (NGOs) and aid workers working with refugees are smeared by government officials. A new protest law unduly restricts the right to freedom of peaceful assembly. Survivors of gender-based violence encounter obstacles in seeking protection and justice. Law enforcement abuse remains a widespread practice. Hate crimes and anti-immigrant sentiment remain an issue. 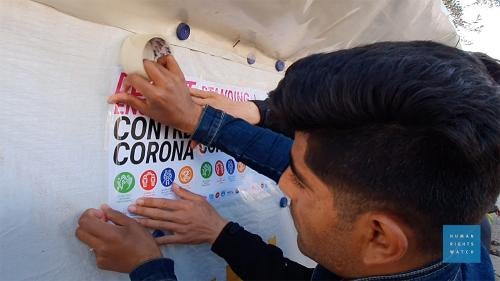 A nationwide lockdown implemented in March was eased in May for the general population, but the government maintained discriminatory restrictions on thousands of migrants and asylum seekers living in camps on the islands and mainland, and failed to take measures to alleviate overcrowding or improve sanitation in the camps.

Cases soared starting in August and continuing at time of writing, adding pressure on the already-strained public health sector, after a decade of economic crisis and austerity measures that included drastic budget cuts for public hospitals. Healthcare workers protested throughout the year against working conditions, and lack of staff, medicine, testing, and equipment in public hospitals.

School closures in Greece began in early March and students and teachers faced obstacles in distance learning due to lack of equipment and network problems. Before the pandemic, an estimated one in five students attending the poorest quartile of Greek schools did not have access to a computer they could use for schoolwork, while one in ten did not have access to the internet, according to an analysis by the United Nations Education, Scientific and Cultural Organization (UNESCO).

Schools reopened in mid-September amid student protests over unsafe conditions; within a week, dozens of schools closed again after staff or students contracted Covid-19. At time of writing, hundreds of schools across Greece were occupied by high school students demanding more teachers, smaller classrooms, permanent cleaning staff, and rejecting a government proposal to install cameras in schools for e-learning.

As of early October, children on the Greek mainland, living in migrant camps under lockdown due to Covid-19 cases in these facilities, were unable to attend schools, and only around 50 of more than 4,000 school-age migrant and refugee children on the Aegean islands of Lesbos and Samos were enrolled in schools, according to humanitarian agencies.

In May, according to the National Confederation of Disabled People Greece, authorities failed to ensure support for people with disabilities who were disproportionally affected by the prolonged confinement in their homes, in closed institutions or supported living structures.

Inmates in prisons across the country protested Covid-19-related measures limiting leave and contact with relatives and demanded measures to tackle chronic overcrowding and improve conditions and care.

With limited exceptions, the government maintained its policy of blocking asylum seekers who arrive on the Aegean islands from moving to the mainland. The containment policy trapped thousands in overcrowded and abysmal conditions with limited access to protection, health care, adequate water, sanitation, and hygiene products to limit the spread of Covid-19. At time of writing, 19,929 asylum seekers were on the islands, including more than 16,000 in camps designed to host around 13,000.

Fires destroyed Europe’s largest refugee camp, Moria camp, on Lesbos, in September, leaving thousands, including more than 4,000 children, homeless and without food and water until the majority were rehoused in a temporary tent camp.

According to aid groups, authorities failed to provide camp residents in the new camp with adequate and safe access to water, education, sanitation, supplies for menstrual hygiene management, and health care, or sufficient protection from the elements and from sexual and gender-based violence and harassment. Services for survivors and those at risk of violence remained insufficient, and access to pre- and post-natal care and support for people with newborns remained limited. At time of writing, there were 19 confirmed Covid-19 cases in the new camp, with a population of about 9,500. There were concerns about the risk of lead poisoning in the new camp due to its location on a former military shooting range.

A new asylum law that entered into force in January undermines access to protection and exposes asylum seekers to greater risks of deportation and longer periods of detention. In July, the United Nations Working Group on Arbitrary Detention (WGAD) said new provisions appear to introduce more restrictive procedures that may compromise the general legal principle that detention of asylum seekers should be exceptional.

Following Turkey’s announcement in February that it would no longer stop asylum seekers and migrants from leaving Turkish territory to reach the European Union, thousands of people attempted to cross by sea and overland in March.

In response, Greece barred the lodging of asylum claims for anyone crossing the border irregularly during that month, prosecuted people for irregular entry, arbitrarily detained nearly 2,000 people in unacceptable conditions in two newly established detention sites on the mainland, under the pretext of Covid-19, and violently pushed back people attempting to enter Greece.

Since then, law enforcement officers have summarily returned thousands of people to Turkey, including people picked up by police hundreds of kilometers inside Greece. In June, Greece’s Supreme Court Prosecutor opened a criminal investigation into the pushbacks that occurred in March in Evros, including into the alleged shooting and deaths of two people by Greek security forces. The UN WGAD urged authorities to promptly and fully investigate all allegations of pushbacks, including any acts of violence or ill-treatment, and to ensure that such practices do not occur in the future.

In June, the Greek government began evicting more than 11,000 recognized refugees from government-provided apartments, hotels, and camps, leaving hundreds of people— including families with children, pregnant and single women, as well as people with disabilities—on the streets. The government announced in September a two-month pilot plan to house recognized refugees leaving the islands until they find a more permanent home.

At time of writing, 176 unaccompanied children were still detained in abysmal conditions in police stations and detention centers across Greece, under the so-called protective custody regime, while hundreds more were in camps with adults or homeless due to authorities’ failure to provide adequate shelter or foster care. In May, parliament decreased the time such children can be detained from 45 to 25 days.

News emerged in September that 33 members of nongovernmental groups, and two “third-country nationals,” are facing criminal charges of espionage, violating state secrets, and belonging to a criminal organization for allegedly facilitating the irregular entry of foreign nationals from Turkey to Lesbos.

During the Greece-Turkey border crisis in March, a series of attacks against staff of international and nongovernmental organizations (NGOs), including UNHCR, aid workers and journalists, was reported after inflammatory comments were made by government officials targeting NGOs working with refugees. On Lesbos, angry mobs attacked NGO facilities and vehicles with bats. Some NGOs suspended operations and even evacuated volunteers back to Athens. Threats from right-wing sources and intimidation of aid workers and vandalism and arson directed against NGO properties continued at time of writing.

With legislative changes adopted in March, May, and September, the government introduced strict and intrusive registration and reporting requirements for nongovernmental groups and all their members, staff, and volunteers, working in the areas of asylum, migration, and social inclusion, raising concerns about disproportionate interference with the rights to privacy, data protection (it requires publication of personal data of donors and supporters), and freedom of association. In July, the Expert Council on NGO Law at the Council of Europe concluded that the new regulations should be substantially revised so that they are brought into line with European standards.

In its October rule of law report, the European Commission said that despite reforms, concerns remain over the efficiency and quality of the justice system. It also flagged concerns about attacks and threats against journalists and the narrowing space for civil society groups, particularly those working on the rights of migrants and asylum seekers.

In July, the government passed a highly controversial law regulating demonstrations that raised concerns about undue interference with the right to peaceful assembly. The law gives authorities broad discretion to disband assemblies that have not been notified, even though it allows for spontaneous protests, and provides that organizers can be held accountable for harm or damage caused by protesters under certain circumstances.

Far-right groups continued to campaign against asylum seekers on the islands, and there were reports of attacks across the country on persons perceived to be migrants or Muslims. Statistics for hate crimes by the nongovernmental Racist Violence Recording Network for 2019, released in July, showed a marked increase in recorded attacks on lesbian, gay, bisexual and transgender (LGBT) individuals compared to the previous year.

In a landmark ruling in October, the leadership, former MPs, and multiple members of the neo-Nazi Golden Dawn party, were convicted for constituting and/or participating in a criminal organization that orchestrated or colluded in the murder of the 34-year-old anti-fascist activist and rapper Pavlos Fyssas, the murder of 27-year-old Pakistani national Shehzad Luqman, and numerous other brutal attacks against migrants and trade unionists.

The trial of six people, including four police officers, for causing fatal bodily harm in the 2018 killing of 33-year-old queer activist and human rights defender Zak Kostopoulos began in October. Kostopoulos was brutally beaten up by two men after entering a jewelry shop in central Athens, while footage showed police violently attempting to arrest Kostopoulos while he lay on the ground.

The UN Working Group on discrimination against women and girls expressed concern in June that survivors of domestic and family violence in Greece are routinely encouraged to engage in mediation with their abusers, noting that this is contrary to international standards, and that perpetrators are rarely prosecuted or punished.

In May, the European Court of Human Rights ordered Greece to ensure adequate health care and living conditions for a pregnant woman living in the Pyli camp on Kos Island. Even before the Covid-19 pandemic, the Greek government was not meeting international standards for health care, nutrition, and bedding for migrant pregnant people and new mothers.

In its June report on Greece, the UN Working Group on discrimination against women and girls said migrant and asylum-seeking women who are survivors of gender-based violence lack access to support and safety, and that there are insufficient shelters and emergency accommodations and inconsistent coordination of services.

In July, the UN WGAD criticized the procedure for involuntary admission of persons with psychosocial disabilities to psychiatric hospitals, including the fact that police officers are frequently required, by order of the Public Prosecutor, to arrest persons who have been reported by relatives or neighbors to have a psychosocial disability.

In April, the Council of Europe Committee for the Prevention of Torture (CPT), said that ill-treatment by the police, especially against migrants and Roma, remains frequent, particularly in police facilities, and noted that most cases of alleged police ill-treatment are not prosecuted and only very few result in criminal sentences or even disciplinary sanctions. The CPT concluded that the current system of investigations into allegations of ill-treatment is not effective.