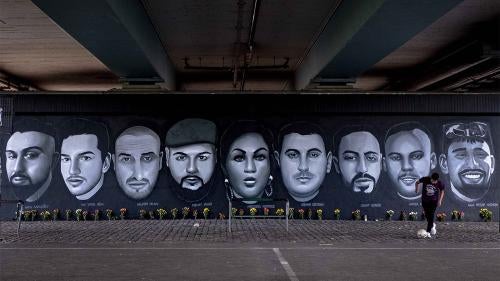 Nine people were killed in February in a racist attack. Right-wing extremist structures are surfacing within the police and armed forces. Crimes committed based on far-right and antisemitic ideology remain a serious concern. Protests against the government’s Covid-19 measures attracted people with neo-Nazi and antisemitic views. Vulnerable groups, such as migrant workers, asylum seekers, and homeless people were disproportionately affected by the Covid-19 pandemic. In its October rule of law report, the European Commission praised media freedom and pluralism in Germany but flagged some concerns about increasing attacks on journalists.

According to government data, in the first half of 2020, 9,305 “far-right politically motivated crimes” were reported, 390 of which involved violence, compared to 8,605 during the same period in 2019. According to the same data, as of July, 876 antisemitic crimes, including 21 violent attacks, had been reported. At time of writing, 469 suspects of antisemitic crimes had been investigated, with 4 arrests. In the first half of 2020, 463 anti-Islamic offenses were reported to police, injuring 21. Thirty-three attacks targeted mosques. No one had been convicted at time of writing.

In a March report, the European Commission against Racism and Intolerance (ECRI), a Council of Europe monitoring body, said the police do not sufficiently co-operate with civil society to detect and register hate crimes, resulting in under-reporting of such offenses.

In June, the trial began against two men accused of involvement in the killing of local politician Walter Lübcke in Hesse in June 2019. The prosecution relied on evidence indicating that the defendants were involved in neo-Nazi circles and targeted Lübcke because of his pro-refugee stance.

A lawyer, politicians, activists, and public figures received threats throughout the year. The threats, which started in August 2018, were sent by a secretive group calling itself “NSU 2.0,” referring to the German neo-Nazi group that between 2000 and 2007 killed at least 10 people in Germany. Investigations initiated in 2018 revealed that personal information of victims was retrieved from police computers, intensifying the public debate over right-wing extremism within police forces. By mid-September, 25 investigations against 50 suspects, including police, were ongoing.

In October, the Federal Office for the Protection of the Constitution for the first time presented a report on right-wing extremism within the police, documenting 350 suspected cases between March 2017 and March 2020.

In September, 30 police officers were suspended and placed under disciplinary investigations for being part of a chat group where racist and extremist material was shared, including symbols banned under German law. In February, 7 police cadets were suspended for exchanging antisemitic and misogynistic content in chat groups, while in October, 26 cadets were found to be members of a racist chat group.

In its March report, ECRI found that police authorities are unaware of or unwilling to acknowledge evidence of extensive use of racial profiling by the police and recommended the government commission a study on police racial profiling.

Becoming the first federal state to do so, Berlin adopted a law in June entitling victims to seek compensation for discrimination by public authorities, including police.

In August, the federal labor court upheld a 2018 court decision granting financial compensation to a woman who was not hired for a teaching position because she wore a headscarf.

In April, the trial of two alleged former Syrian intelligence officials began in Koblenz in a landmark case, under Germany’s universal jurisdiction laws, concerning torture in a Syrian prison.

In August, the government stated that over 80 percent of German businesses were not meeting their due diligence obligations under the National Action Plan on Business and Human Rights. In the same month, the ministers of Labor and Development announced a law to make human rights due diligence throughout global supply chains mandatory. However, the minister of economy opposed key elements of the proposal, and no agreement had been found at time of writing.

In the first 8 months of 2020, 74,429 people applied for asylum in Germany, almost 35 percent less than in the same period in 2019. Most applicants came from Syria, Iraq, Afghanistan, and Turkey. By the end of August, 43,316 applications were pending.

By September 30, Germany had relocated 713 asylum seekers and refugees from Greece, as part of a commitment in March to accept children with health conditions and their close family members, or unaccompanied children below the age of 14. In September, Germany said it would also relocate 1,500 people from Greek islands, including from Moria’s camp on the island of Lesbos that was ravaged by fires, who have already been granted protection.

In February, a German far-right gunman killed nine people from ethnic minority groups in attacks on two shisha bars in the city of Hanau before killing his mother and himself. The attacker had published an online manifesto containing xenophobic, racist, and misogynist views.

In July, the trial began for the gunman who in 2019 livestreamed his attacks on a synagogue and a restaurant in the city of Halle in which he killed two people. The gunman had posted antisemitic and misogynist comments online. At time of writing, the trial was ongoing.

Also, at time of writing, there were several constitutional complaints pending against changes in laws in some states broadening police powers while failing to increase transparency and oversight. These measures include broad surveillance powers, such as the use of malware and extension of preventive custody.

In May, the German constitutional court ruled that the German Federal Intelligence Service’s (BND) practice of monitoring worldwide internet traffic was unconstitutional and did not ensure the protection of media freedom. Reporters without Borders said reforms proposed in response to the ruling further widen BND powers.

In a September report, parliament’s scientific service found that planned amendments to the Network Enforcement Act (NetzDG) are not in line with the German constitution. The planned changes, designed to combat hate crime, require internet companies to report suspected illegal content and some of the poster's personal information, including their IP address, to the Federal Criminal Police Office.

In November 2019, the government repatriated a German woman and her three children from a locked camp in northeast Syria for Islamic State (ISIS) suspects. More than 80 other German ISIS suspects and family members are still held in filthy, overcrowded, and life-threatening conditions in northeast Syria.

Germany took steps to mitigate the impact of the lockdown it implemented in response to Covid-19. The government introduced the largest financial aid package in its history to stabilize the economy and prevent unemployment.

Despite intense lobbying from the car industry, the government did not include subsidies for petrol and diesel-driven cars in its recovery package, opting to support less polluting electric cars. The government facilitated access to state social support and introduced temporary bans on termination of rental contracts between April and June if tenants were unable to pay rent. But the vulnerable situation of already-marginalized populations deteriorated.

Asylum seekers living in large-scale shared accommodation had a higher risk of contracting Covid-19, according to the German public health institute (RKI), and several camps faced large outbreaks among residents. In May, two-thirds of the roughly 600 people housed in a reception center in Bavaria, contracted Covid-19, highlighting the lack of sufficient space to practice social distancing in camps.

Large outbreaks of Covid-19 among meat plant workers, including in June among more than 2,000 employees at Tönnies, a meat processing company, highlighted the deplorable living and exploitative working conditions in the industry. Many employees were migrants from Romania and Bulgaria and worked for sub-contractors. In July, the government presented a bill to improve conditions in the meat processing industry, by banning the use of subcontractors and increasing companies’ accountability for health and safety of workers.

According to the Federal Working Group on Homeless People, a nongovernmental group, the pandemic exacerbated the precarious situation of homeless people, further limiting their access to psychosocial and medical support, means of income, and state financial support.

In March, schools closed as a measure to reduce the spread of Covid-19 and lessons were held online for most children, although children of essential workers were able to access school. Children from low-income households, including refugee children, often lacked equipment and an internet connection to participate in online lessons. Evidence suggests that Germany is lagging in developing digital learning in schools.

Protests against government measures to tackle Covid-19, such as the obligation to wear masks in certain places, attracted people with antisemitic and neo-Nazi views. Following two mass rallies in Berlin in early and late August, the German Union of Journalists documented attacks against nine camera crews, twenty-two journalists, and threats against two editorial departments.

In April, the government-supported national helpline for violence against women documented a 20 percent increase in requests for consultation related to domestic violence. This increase persisted in subsequent months, according to the helpline.

Persistent barriers to accessing legal abortion remain due to a law prohibiting “advertising” of abortion, which significantly restricts sharing of information about abortion services, and lack of medical personnel trained to perform abortions.

The government considered the protection of human rights as one of the central pillars of its foreign policy, advocated for international human rights standards, and played an important role in the fight against impunity. But this approach was contested when other policy priorities were at stake.

During the year, Germany was a non-permanent member of the United Nations Security Council and elected to the UN Human Rights Council. In New York, the German mission successfully moved human rights high up on the Security Council’s agenda: it invited the UN Human Rights Commissioner to New York, regularly organized meetings with civil society representatives, and addressed crisis situations. In the Human Rights Council, Germany engaged in getting a swift response to the Covid-19 pandemic but did not live up to expectations on specific country situations where it could have demonstrated leadership more often.

During Germany’s European Union presidency in the second half of the year, the government identified the crisis of rule of law within the EU, the reform of European migration policy, and an EU-wide sanctions regime against human rights abusers as important areas for human rights protection. But during this period, EU institutions did not pursue more decisive action against rule of law declines in countries including Hungary and Poland.

In its bilateral relations, Germany addressed human rights violations with countries such as China and Russia. Foreign Minister Heiko Maas requested an independent UN investigation into the political education camps in Xinjiang and the withdrawal of the security law in Hong Kong, although a vocal stance on China by other ministers of the government was often missing. Germany offered protection and medical treatment for the Russian opposition politician, Alexei Navalny.

The German human rights commissioner in the Foreign Office, Bärbel Kofler, was a strong voice for human rights defenders and independent civil society worldwide. The Human Rights Committee in parliament was an important actor for the protection of international standards.

In early 2020, the government disputed the admissibility of a UN complaint filed last year by a group of 15 children against Germany and four other countries for its lagging efforts to fight the global climate crisis. The government argued that the complaint does not fall within the jurisdiction of the child rights treaty and that its obligations do not extend to the 14 children living outside Germany because emissions in one country do not foreseeably affect the realization of rights in other countries.