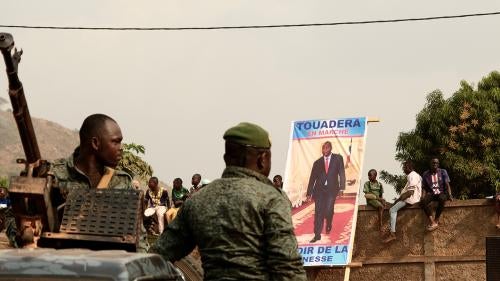 A 2019 peace deal between the government and 14 armed groups collapsed as a rebel coalition, created in December 2020, launched attacks against major towns outside of the capital, Bangui. The coalition, called the Coalition of Patriots for Change (Coalition des patriotes pour le changement, CPC), created havoc in the run-up to elections in December, preventing hundreds of thousands of people from voting.

Former President François Bozizé returned to the country, having fled Bangui in 2013 as Seleka fighters advanced south. Bozizé’s return was followed by the return of Michel Djotodia, the Seleka leader who took power from Bozizé and who served as president until January 2014. Djotodia is reported to have stayed in close contact with some Seleka factions. The return of both men came before general elections, scheduled for December. The United Nations Security Council imposed targeted sanctions on Bozizé in 2014, and the United States sanctioned both Bozizé and Djotodia in 2014.

Sidiki Abass, the leader of the rebel group 3R, suspended his participation in the peace deal. Abass resigned from a government position in 2019 after his fighters killed 46 civilians in coordinated attacks in Ouham-Pendé province.

Local courts prosecuted some members of armed groups implicated in serious crimes, but no prosecutions were brought against the leaders. Investigations were pending before the Special Criminal Court (SCC), a war crimes court based in Bangui staffed by national and international judges and prosecutors operating with substantial UN assistance. Five years on from its creation, funding for the court remained insecure. The International Criminal Court (ICC) in July announced the trial date of two suspects associated with anti-balaka militias.

Known cases of Covid-19 and deaths related to the coronavirus remained low across the country, but restrictions on travel and other activity, imposed to prevent spread of the virus, delayed the implementation of some programs tied to the 2019 peace deal. Due to the pandemic, schools were closed between April and September, affecting nearly one million school-going children and adolescents.

Fighting escalated in the northeast as former Seleka groups continued to fracture along ethnic lines, particularly among the Rounga, Kara, and Gula groups. Fighting between factions of the Popular Front for the Rebirth of the Central African Republic (FPRC) in the towns of Bria in January and Ndele in April killed scores of civilians. Fighting between the FPRC and the Movement of Central African Liberators for Justice (MLCJ) in Birao in January, February, and March killed dozens of fighters, but also civilians.

Fighters from the Union for Peace in the Central African Republic (UPC) detained seven health workers, including a doctor, as they were traveling for a measles vaccination campaign near Obo, in Haut-Mbomou province. UPC had previously restricted road travel, seeking to consolidate control in the southeast of the country. UPC leaders claimed the health workers were detained for attempting to enter their zone without a permit from the UPC.

The United Nations reported that women and children were used as human shields by FPRC fighters in Ndele to prevent UN peacekeepers deploying in the town.

Violence erupted in the capital Bangui in late December 2019, and clashes between traders and self-defense groups in the PK5 neighborhood killed at least 30 civilians. The fighting was sparked by the increase in demands for taxes by armed groups in the neighborhood.

On July 25, Bozizé announced his candidacy for the December 2020 presidential election on behalf of his Kwa Na Kwa party. Bozizé, who was president from 2003 to 2013, returned to the country in late December 2019. He was sanctioned in 2014 by the UN Security Council and the US for his role in providing support to anti-balaka militias. On December 3, the Constitutional Court ruled that Bozizé did not meet a morality requirement for candidates, citing the UN sanctions and an international arrest warrant, and barred his candidacy.

In August, Catherine Samba-Panza, the interim-president from 2014-2016, also announced her candidacy. While Samba-Panza oversaw a degree of stability across the country and supported the establishment of the UN peacekeeping mission, some state security officials, including officers from the Central Office for the Repression of Banditry (Office Central de Répression du Banditisme, OCRB), committed extrajudicial killings with impunity in Bangui during her tenure.

President Faustin-Archange Touadera, who was first elected in 2016, was declared the winner of the presidential elections in January 2021. A political coalition made up of opponents issued a public statement contesting the vote.

The total of displaced people remained alarmingly high, at over 1.2 million people, according to the UN. The total number of refugees in the region from the Central African Republic was 622,000. The total number of internally displaced people was 623,000. Conditions for IDPs and refugees, most of whom stay in camps, remained harsh and many had little to no access to humanitarian assistance.

About 2.6 million people, out of a population of 4.6 million, needed humanitarian assistance. The humanitarian response plan was underfunded, with a budget gap of around US$272 million in October.

Justice for War Crimes and Crimes Against Humanity

In February, the Bangui Court of Appeal sentenced 28 anti-balaka fighters for the killing of 75 civilians and 10 UN peacekeepers around Bangassou, in Mbomou province, in 2017. The sentences ranged from 10 years to life.

In July, the ICC set February 9, 2021, as the opening of the trial for anti-balaka leaders Patrice-Edouard Ngaïssona and Alfred Yékatom. The charges against Ngaïssona and Yékatom include war crimes and crimes against humanity committed between December 2013 and December 2014. Ngaïssona was arrested in France and transferred to the ICC in December 2018. Yékatom was transferred to the ICC by Central African Republic authorities in November 2018. The ICC has not issued arrest warrants against any Seleka leaders, unless they are under seal.

In September, former presidential guard under Bozizé, Eric Danboy Bagale, was arrested in France for alleged war crimes and crimes against humanity for acts committed between 2007 and 2014, both as a head of the presidential guard and as a leader in the anti-balaka.

The UN Security Council and the United States imposed sanctions on Sidiki Abass, the leader of 3R, in August. He was implicated in serious human rights abuses, including the killing of civilians.

In September, the US imposed targeted sanctions on two Central African mining businesses and three Russian employees who work in the country tied to Yevgeniy Prigozhin, a Russian oligarch said to be close to Russian President Vladimir Putin. Investigations into the 2018 murder of three Russian journalists has stalled. The men, found dead north of Sibut, Kemo province, were investigating Russia’s increased role in the country and the possible role of Wagner, a mercenary outfit affiliated with Prigozhin.

The UN peacekeeping mission, MINUSCA, deployed 11,650 military peacekeepers and 2,080 police across many parts of the country.

Under Chapter VII of the UN Charter, the mission is authorized to take all necessary means to protect the civilian population from threat of physical violence and to “implement a mission-wide protection strategy.” In November, the UN Security Council extended the mandate of the mission.

In October, the UN Human Rights Council continued the mandate of the Independent Expert on the Central African Republic for another year.

The European Union extended the mandate of its military assistance and training mission (EUTM CAR) until 2022 and established a civilian mission (EUAM RCA) to support security sector reform. The EU continued to support peace and accountability efforts in the country.