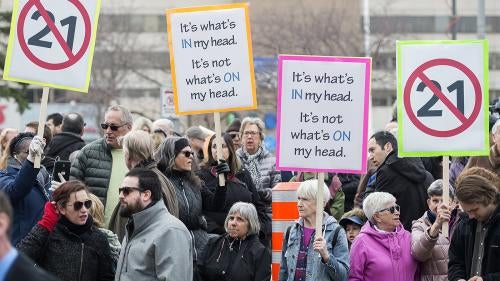 The government of Prime Minister Justin Trudeau, re-elected in October 2019, has made efforts to advance human rights in Canada, but serious and longstanding challenges remain. Many of these relate to the rights of Indigenous peoples, including violations of their right to safe drinking water, violence against Indigenous women and girls, and violations of the right to food in these communities as a result of failures to mitigate the impact of climate change.

Canada also grapples with serious human rights issues abroad relating to abuses by Canadian mining companies and the government’s failure to suspend arms sales to the Saudi-led coalition in Yemen despite calls by the United Nations to refrain from providing arms and military support to the parties to the conflict. The Trudeau government has also failed to take meaningful steps to repatriate dozens of Canadians, most of whom are children, unlawfully detained in life-threatening conditions for nearly two years in prisons and camps for Islamic State (ISIS) suspects and their families in northeast Syria.

Longstanding and systemic discrimination against Indigenous peoples persists across Canada. The water supplied to many First Nations communities on lands known as reserves is contaminated, hard to access, or at risk due to faulty treatment systems. The poor water and sanitation conditions have a disparate and negative impact on at-risk populations, including children. While the most severe public health concerns—water-borne illnesses and related deaths—have mostly been avoided through water advisories, the social costs and human rights impact of the water crisis are considerable.

Both the provincial government of Ontario and the federal government have consistently failed to address the health consequences of decades-old mercury contamination in the First Nation community of Grassy Narrows. While the federal government committed funds to support the building of a mercury care home in Grassy Narrows in April, it has yet to provide compensation to most of the affected community, who continue to live with the physical and mental health impacts of mercury exposure.

Climate change is also contributing to a growing problem of food poverty and related negative health impacts for Indigenous peoples in Canada. Warming temperatures and increasingly unpredictable weather are reducing the availability of Indigenous peoples’ traditional food sources and increasing the difficulty and danger associated with harvesting food from the land. As a result, households must supplement their traditional diet with more purchased food. But healthy foods, such as fruits and vegetables, are cost-prohibitive in remote areas. With Canada warming at about twice the global average, the harmful impacts of climate change that Indigenous populations in Canada are experiencing point to more devastating impacts in the future.

Human Rights Watch research found that the Canadian government has failed to put in place adequate measures to support First Nations in adapting to current and anticipated impacts of climate change. Federal and provincial climate change policies have largely ignored the impacts of climate change on First Nations’ right to food. Food subsidies and health resources that could help counter current and projected impacts are often not available, insufficient, or do not reach those most in need.

In June, the federal government promised to release a national action plan to mark the one-year-anniversary of the National Inquiry into Missing and Murdered Indigenous Women and Girls. The National Inquiry made 231 recommendations to the government to address endemic levels of violence against Indigenous women and girls in Canada. While Prime Minister Trudeau vowed  to “turn the inquiry’s calls to justice into real, meaningful, Indigenous-led action,” no action plan had been released at time of writing.

In May, more than 1,500 academics and activists sent a letter to Crown-Indigenous Relations Minister Carolyn Bennett demanding that she act on the National Inquiry’s calls for justice. In June, the Native Women's Association of Canada issued a report that handed the federal government a failing grade for its response to the National Inquiry recommendations.

In recent years, Canada’s federal government, the Canada Border Services Agency, and the Immigration Division of the Immigration and Refugee Board have embarked on policy developments to reform the immigration detention system. New regulations require decision-makers to consider children’s best interests in decisions related to immigration detention. It is in the best interests of children to be united with their families in community-based, non-custodial settings but, according to the most recently published 2019-2020 statistics, children are still being placed in detention to accompany their detained parents. It remains unclear how many children are separated from their detained parents.

At time of writing, the Canada Border Services Agency remained the only major law enforcement agency in the country without some form of independent civilian oversight.

Following the onset of the Covid-19 pandemic, in March 2020, immigration detainees in Quebec went on a hunger strike to protest the lack of protection from COVID-19 in detention facilities. Over the following weeks, the government released immigration detainees at unprecedented rates due to public health concerns.

Despite being home to nearly half of the world’s major mining companies, Canada has consistently failed to implement promised reforms to hold these corporations accountable for abuses committed abroad. The Canadian Ombudsperson for Responsible Enterprise does not currently have the authority to independently investigate or publicly report on human rights abuses involving Canadian extractive companies and has limited capacity to hold responsible parties accountable. In May, a petition to the House of Commons called for the government to empower the ombudsperson with independence and restore the office’s power to investigate allegations of human rights abuses by Canadian mining companies.

In February, the Supreme Court ruled that a case filed by three Eritreans who say they were victims of forced labor at a mine partly owned by Nevsun Resources could proceed in Canadian courts. In a 2013 investigation into this mine, Human Rights Watch found that an Eritrean construction firm, owned by the country’s ruling party, that built part of the mine’s infrastructure regularly exploited conscript workers assigned to it by the government. The Supreme Court’s  landmark decision could open the door for victims of corporate abuses overseas to sue companies in Canada for violations of international human rights law.

Human Rights Watch research in June found that Canada is failing to take adequate steps to assist and repatriate dozens of Canadians unlawfully detained in prisons and camps for ISIS suspects and their families in northeast Syria. In October, Canada repatriated a 5-year-old orphan from these camps but Prime Minister Trudeau said the government had no intention of bringing home the remaining Canadians detained for nearly two years in deeply degrading and often inhuman conditions. There are an estimated 46 Canadians still detained in northeast Syria including 8 men, 13 women, and 25 children. None of the Canadians has been charged with any crime or brought before a judge to review the legality and necessity of their detention.

The detainees are held in filthy, life-threatening conditions with inadequate hygiene and medical care. As of late September, one detainee had tested positive for Covid-19 and the World Health Organization warned of a “significant risk” of high transmission in the camps.

In April, the Supreme Court of Canada refused to hear an appeal by civil rights groups seeking to prevent implementation of portions of Bill 21, a 2019 Quebec provincial law  banning certain categories of civil servants from wearing religious symbols at work, pending a ruling on its constitutionality. The controversial law banning the wearing of religious symbols (including hijabs, kippahs, and turbans) by teachers, police officers, and judges among others also prohibits anyone with religious face coverings from receiving government services, including healthcare and public transit. The Quebec Court of Appeal had previously refused to pause implementation of key provisions of the law pending resolution of the legal challenges in part because, in enacting the law, Quebec had preemptively invoked the exceptional “notwithstanding” clause in Canada’s constitution. The clause allows provincial or federal authorities to temporarily override some guarantees of the Charter of Rights and Freedoms. Supreme Court refusal to hear the appeal left the provincial court decision in effect.

In May, six United Nations special rapporteurs and members of two UN working groups called on Canada to secure the urgent release and repatriation of a 5-year-old Canadian orphan detained in a camp for ISIS suspects and their families in northeast Syria. The UN experts noted that “Canada has primary responsibility for ensuring that she is treated with humanity and respect of her dignity and human rights” and urged the Trudeau government to “consolidate and deepen its efforts to enable her safe return.”

In a report released in September, the UN special rapporteur on hazardous substances called on Canada to “ ensure that the environmental standards on reserves are as strong as or stronger than the standards on neighboring provincial, territorial and federal lands, to ensure equal protection for Indigenous persons.”

In September, Canada announced its intention to intervene, together with the Netherlands, in Gambia’s case before the International Court of Justice alleging that Myanmar’s atrocities against the Rohingya violated the Genocide Convention.

At the September session of the UN Human Rights Council, Canada joined 32 other governments in condemning Saudi Arabia’s human rights record and calling for the release of all political dissidents and women’s rights activists, accountability for past abuses, and an end to persistent discrimination against women. Canada has also supported joint statements condemning China’s rights violations, and is a member of UN core groups addressing the rights situations in Yemen and Sri Lanka.

A report released in September from the UN Group of Eminent International and Regional Experts on Yemen named Canada for the first time as one of the countries helping to fuel the conflict through its arms transfers to Saudi Arabia and the United Arab Emirates. The report urged all states to refrain from providing arms and military support to the parties to the conflict.