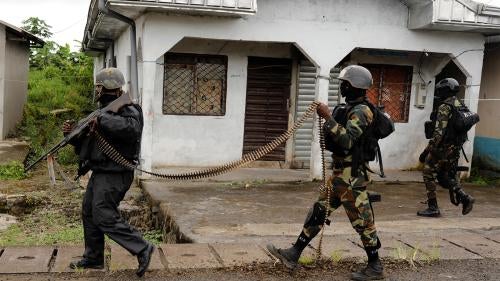 The government continued restricting freedom of expression and association and has become increasingly intolerant of political dissent. Political space was limited as authorities cracked down on opponents of President Paul Biya and his ruling party. Hundreds of opposition party members and supporters were arrested in September following demonstrations calling for a peaceful resolution to the crisis in the Anglophone regions. In these regions, violence between government security forces and armed separatists intensified.

In February, Cameroonian soldiers and armed ethnic Fulani men massacred 21 civilians in Ngarbuh, a village in the North-West region. Separatists targeted aid workers, their premises, and property across the two English-speaking regions. They also attacked other civilians, posting some of the videos of such attacks on social media. Separatists have violently enforced a boycott on children’s education since 2017, and on October 24, gunmen attacked a school in Kumba, South-West region, killing 7 children and injuring 13.

The Islamist armed group Boko Haram carried out attacks in the Far North region from January 2020, killing hundreds of civilians. Responding to these attacks, government forces forced civilians to perform local night guard duties to protect against Boko Haram attacks in March and April in at least one town.

The government took measures to curb the spread of the Covid-19 virus, including closing schools and banning mass gatherings at the onset of the pandemic. However, the pandemic was also used as a pretext to silence the opposition and quell dissent. There has been little government transparency with regards to its disbursement of funds collected to address the pandemic.

Hundreds of civilians have been killed since January 2020 in the North-West and South-West regions, where violence has been acute since the crisis began in late 2016, as separatists seek independence for the country’s minority Anglophone regions. Violence displaced tens of thousands of people in the past year, adding to the hundreds of thousands who have fled their homes since the start of the violence.

In March, the Southern Cameroons Defence Forces (SOCADEF), a separatist group, called for a ceasefire as the Covid-19 pandemic was declared. In June, government officials held peace talks in the capital, Yaoundé, with the leaders of the Ambazonia Interim Government, a major separatist group. Neither initiative led to an end to the violence.

Security forces responded to separatist attacks with a heavy hand, often targeting civilians and killings hundreds of people across the North-West and South-West regions.

Between January 17 and 20, 2020, security forces conducted a military operation in Bali, North-West region, in retaliation for separatist attacks on polling centers, destroying over 50 homes and killing several civilians, including two men with intellectual disabilities.

On February 14, government forces and armed ethnic Fulani killed 21 civilians, including 13 children and 1 pregnant woman, in Ngarbuh in North-West region. Residents told Human Rights Watch the attack was to punish civilians suspected of harboring separatist fighters. The government initially denied soldiers were involved in the attack, but in March, following international pressure, President Biya established a commission of inquiry into the killings.

In April, the government admitted their security forces bear some responsibility for the killings and announced the arrest of two soldiers and a gendarme.

On June 10, a grenade was fired into the courtyard of the district hospital in Bali, North-West region, following clashes between government soldiers and separatists, leading to the death of one cardiac patient. At least four others were injured.

Soldiers from the 42nd Battalian in Mozogo, in the Far North, forced civilians to perform local night guard duty to protect the area against attacks by Boko Haram. From mid-March to late April, soldiers beat or threatened those who refused.

Denunciations by local nongovernmental organizations and the National Human Rights Commission in April stopped the beatings, but people in Mozogo continued to live in fear of beatings, and the forced labor and threats continued.

Armed separatist groups have killed, tortured, assaulted and kidnapped hundreds of people. They also prevented humanitarian workers and teachers from doing their jobs, depriving children of access to education.

In the run up to the regional elections in February, armed separatists targeted those willing to participate, whether as candidates, election officials, activists, or citizens, kidnapping over 100 people and destroying property. Ransoms were paid for release. Voter participation was low in the Anglophone regions because of insecurity and fear of and threats of attacks.

On January 30, separatists kidnapped a 19-year-old secondary school student in Buea, South-West region, and chopped her finger off with a machete for going to school. The girl was released three days later following a ransom payment.

Separatists have killed at least six civilians since mid-May, including on May 17 a teacher working at the University of Bameda in the North-West region.

On July 6, separatists killed a community health staff working for Doctors Without Borders in the South-West region after accusing him of collaborating with the military.

In August, separatist fighters in Muyuka, South-West region, filmed the beating of a 35-year-old woman as she begged for her life. The video was shared on social media and the fighters killed the woman they accused of collaborating with the government.

Separatists continued to attack schools, students, and teachers across the Anglophone regions. According to the United Nations, 81 percent of children were out of school across the North-West and South-West regions during the 2019 to 2020 academic year.

Attacks in the Far North by Boko Haram

In 2020, attacks and raids by the Islamist armed group Boko Haram increased in the Far North Region, with almost daily killings, kidnappings, thefts, and destruction of property.

In April, Boko Haram fighters stormed Amchidé, Far North region. Two teenage suicide bombers detonated their explosives in the center of the town, killing nine men and injuring 10 others. Another man was shot in a confrontation between Boko Haram fighters and the military.

An attack by apparent child suicide bombers, carried out overnight between August 1 and 2, in a displacement camp in the town of Nguetechewe, killed at least 17 civilians, including 5 children and 6 women, and wounded at least 16. There was no evident military objective in the vicinity.

The government limited the ability of political opponents to function freely.

In September, the government used anti-terror laws and limitations on movements due to Covid-19 as a pretext to restrict freedoms of association and expression, after opponents announced plans to protest the holding of regional elections set for December. The governors of the Littoral and Centre regions banned public meetings and demonstrations indefinitely.

The Territorial Administration Minister warned that law enforcement forces would break up unauthorized demonstrations and advised regional governors to arrest anyone organizing or leading demonstrations. The communication minister warned political parties that protests could be considered “insurrection” and that illegal demonstrations across the country would be punished under the anti-terror law.

Five hundred and six people were arrested for protests in September, 100 people were released while approximately 250 were brought before the courts. Some were charged with terrorism and rebellion, crimes that are heard in military court. The spokesmen and the treasurer of the MRC were held for over two weeks at the State Defense Secretariat (Secrétariat d’Etat à la défense, SED) a prison in Yaoundé.

In May, police arrested nine volunteers from the Survival Initiative, a fundraising initiative by the opposition leader Maurice Kamto, the president of the MRC, to respond to Covid-19, while they were handing out protective masks and sanitizing gel in Yaoundé. They were charged with rebellion, but then later released and the charges dropped.

Cameroon’s penal code punishes “sexual relations between persons of the same sex” with up to five years in prison. Police and gendarmes continued to arrest and harass people they believe to be lesbian, gay, bisexual or transgender (LGBT).

In March, following international pressure, President Biya agreed to establish a commission of inquiry into the killings in Ngarbuh. In an April report, the Cameroon government admitted their security forces bear some responsibility for the killings. In June, the government announced the arrest of two soldiers and a gendarme in connection with the massacre in Ngarbuh. On November 25, the Cameroonian army spokesperson announced that the trial of two soldiers and the gendarme will begin on December 17 in Yaoundé, Cameroon’s capital, before a military court. The defendants are accused of murder, arson, destruction, violence against a pregnant woman, and disobeying orders.

In June, the French ambassador to Cameroon told media that President Biya had assured him that an investigation would be opened into the death in custody of journalist Samuel Wazizi. The declaration was made the same day that the military spokesman, announced that Wazizi had died of severe sepsis on August 17, 2019, at the military hospital in Yaoundé.

Having failed to release any information about Wazizi for 10 months, or the fact that he died in detention, at time of writing authorities had not said whether anyone will be prosecuted for his death. In September, a military court sentenced four soldiers to 10 years in prison and another to two years for the brutal 2015 killing of two women and two children in the village of Zelevet in Far North region. The killings were captured in a video that went viral in early July 2018. The trial was held behind closed doors.

In September, an appeal court in Yaoundé upheld a life sentence on 10 leaders of the separatist group “Ambazonia Interim Government” on charges including terrorism, rebellion, and secession, failing to address the violations of fair trial standards that occurred during their prosecution and conviction before a military court.

In June, in response to the gravity and number of attacks on schools, the killing and maiming of children, and the recruitment and use of children, the UN secretary-general added Cameroon as a situation of concern for the UN's monitoring and reporting mechanism on grave violations against children during armed conflict.