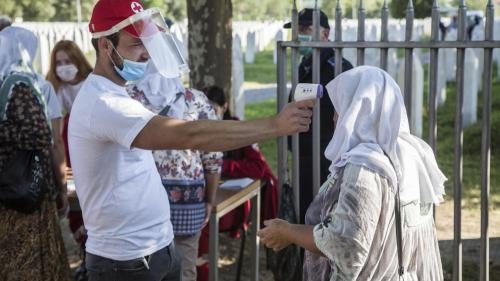 There remained serious human rights concerns in Bosnia and Herzegovina (BiH) in 2020 over ethnic divisions, discrimination, and the rights of minorities and asylum seekers. Pressure on media professionals continued. A long-delayed strategy was adopted to clear the backlog of war crime case prosecution.

In June, an agreement was reached in Mostar between the main political parties to enable local elections to be held for the first time since 2008; they were scheduled for December 20, 2020. An October 2019 European Court of Human Rights (ECtHR) ruling had ordered Bosnia to amend the Election Act 2001 within six months to enable local elections to be held in Mostar. In 2010, the Bosnian Constitutional Court decided that Mostar’s power-sharing structure was unconstitutional and discriminated against the residents of the city, but the government had never changed the law to allow elections to take place.

Eleven years since the Sejdić-Finci ruling by the ECtHR found that the Bosnian Constitution discriminates against ethnic and religious minorities by not allowing them to run for the presidency, the constitution still has not been amended.

The so-called two schools under one roof’ system, referring to the segregation of children in schools based on their ethnicity, persisted in 2020.

The Organization for Security and Co-operation in Europe (OSCE) mission to BiH recorded 91 hate crimes between January and September 2020, the majority targeting victims based on their ethnicity or religion, six involving physical violence. At time of writing, eight trials against perpetrators were ongoing and two were convicted in 2020.

According to Vaša Prava BiH, a nongovernmental organization (NGO) providing free legal aid, the fallout from the Covid-19 pandemic disproportionally impacted marginalized populations, including Roma in BiH. Roma people, who are often employed in the informal sector, lost means of income and Roma children lacked access to online education, the organization said.

In April, the Constitutional Court in BiH examined the blanket ban on outdoor movement for older people and children put in place in response to Covid-19 and determined that the ban was disproportionate and violated the right to the liberty of movement.

In May, the Catholic church held a mass in Sarajevo commemorating the killings of Croatian Ustaša troops and civilians by Yugoslav partisans at the end of World War II. The event sparked protests in Sarajevo accusing the organizers of attempting to rehabilitate the Ustaša regime.

In September, the Council of Ministers of BiH adopted the long-delayed Revised National War Crimes Processing Strategy submitted in May 2018. The strategy seeks to efficiently distribute war crime cases from the state to lower-level courts to clear the backlog in cases. The NGO TRIAL International voiced concerns that in 2020, 25 years since the Srebrenica genocide, war crimes and human rights violations are still denied or trivialized.

In January, the United Nations mandated Residual Mechanism in The Hague rejected the plea for early release of Miroslav Bralo, convicted of war crimes and crimes against humanity against Bosniak civilians in 1993. In March, the UN Residual Mechanism denied Radoslav Brdjanin’s request for early release from a 30-year sentence for war crimes and crimes against humanity committed in BiH.

In August, Ratko Mladić appeared before the mechanism to appeal his conviction for genocide against Bosnian Muslims of Srebrenica and other crimes committed during the 1992-1995 war. The prosecution also appealed the lower court’s decision to acquit Mladić of committing genocide in six other Bosnian municipalities.

In August, the UN Committee on the Elimination of Discrimination against Women (CEDAW) said that BiH had failed to conduct effective and timely investigations into conflict-related sexual violence and that compensation and support for victims was insufficient.

According to information provided by the OSCE, in August 2020 there were 59 cases involving allegations of conflict-related sexual violence, against women and men, against 120 defendants in all courts of BiH. At time of writing, one first instance judgement which can still be appealed, and no final judgments were rendered; one proceeding ended by death of the accused.

The state Service for Foreigner’s Affairs between January and August registered 11,292 irregular arrivals compared to 18,071 during the same period in 2019: 10,738 persons expressed the intention to apply for asylum, and 185 submitted an asylum application. According to the UN Refugee Agency (UNHCR), short application deadlines and limited state capacity to process claims hinder access to asylum procedures. As of August, 15 people were granted subsidiary protection. No one received refugee status.

Around 3,500 refugees and migrants in the northwestern Una-Sana Canton (USC) live outside official centers, many sleeping rough. A growing concern is the number of unaccompanied or separated children among them, left without access to adequate accommodation and child protection services. The UN special rapporteur on the human rights of migrants found in his May 2020 report following a 2019 visit to BiH that “many protection risks remain” for unaccompanied or separated children accommodated in regular reception facilities, due to the lack of appropriate alternatives.

In August, USC authorities severely restricted the movement of migrants and asylum seekers outside official reception centers, including prohibiting new arrivals to the Canton, leaving people stranded on the road without access to basic services.

The lack of systematic data collection and analysis of gender-based and domestic violence continued in 2020. According to the women’s rights organization United Women, domestic violence increased during the pandemic while services for victims were reduced.

In May, the revised Law on Protection from Domestic Violence entered into force in Republika Srpska, making domestic violence a criminal offense and introducing fines for failure to report domestic violence.

The second-ever Sarajevo Pride march took place in August. The Sarajevo Open Center (SOC), a lesbian, gay, bisexual, transgender, and intersex (LGBTI) and women’s rights group, observed an increase in online threats against activists around the time of the march. The organization documented 13 hate incidents against LGBTI people, including cases of domestic violence, noting that due to restrictions imposed in response to the Covid-19 pandemic, LGBTI children were at higher risk of violence at home.

In 2020, journalists in BiH continued to face interference to their work, including defamation lawsuits, verbal threats, and physical attacks. From January until August 2020 the BiH journalists’ association, BH Novinari, documented 51 violations of media freedom. Reporters without Borders in its 2020 World Press Freedom Index, stated that defamation suits are regularly used to obstruct journalists’ work and silence critics.

In July, UN Secretary-General Antonio Guterres stated that the peace in BiH is still fragile and urged regional leaders to counter hate speech and rhetorical division.

In July, Council of Europe Human Rights Commissioner Dunja Mijatović warned that many politicians continue to deny the truth about the Srebrenica genocide, deepening the suffering of the survivors and endangering peace.

OSCE Media Freedom Representative Harlem Desir expressed his concerns over attacks and threats against several journalists and attempts to restrict freedom of expression during the Covid-19 pandemic.

In October, the European Union Commission, in its Communication on EU enlargement policy, said that in BiH “[o]bstructions to justice reform from political actors and from within the judiciary, and the poor functioning of the judicial system continued to undermine citizens’ enjoyment of rights” and that “Bosnia and Herzegovina needs to guarantee freedom of expression and of the media, and the protection of journalists, as well as an enabling environment for civil society, notably by upholding European standards on freedom of association and freedom of assembly.”