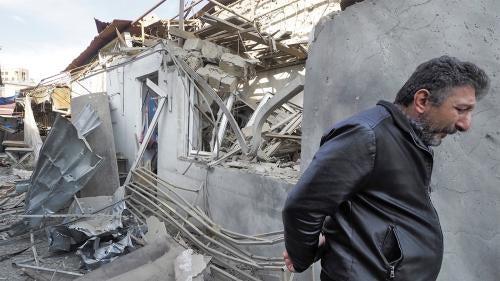 The Covid-19 pandemic and later renewed hostilities over Nagorno-Karabakh dominated events in Armenia. A Russia-brokered truce ended six weeks of fighting on November 10, with Armenia ceding control over several territories to Azerbaijan and without defining the political status of Nagorno-Karabakh. All parties to the conflict committed violations of international humanitarian law. Armenian forces carried out attacks using banned cluster munitions.

The military defeat prompted a sharp political crisis in Armenia with opposition to Prime Minister Nikol Pashinyan demanding his resignation.

In March, the government responded to the pandemic with a state of emergency that lasted for nearly six months and involved restrictions on privacy rights and freedom of movement and assembly. Domestic violence, discrimination against people with disabilities, and violence and discrimination based on sexual orientation and gender identity persisted.

On September 27, Azerbaijan launched a military offensive that escalated fighting between Azerbaijan and Armenia and the de-facto authorities in Nagorno-Karabakh. Tens of thousands of people evacuated Nagorno-Karabakh mainly to Armenia in response to the fighting. Russia deployed peacekeeping forces to oversee the ceasefire it negotiated.

Warring parties committed violations of international humanitarian law (See the Azerbaijan chapter for violations by Azerbaijani forces), that unlawfully harmed civilians. During the fighting, Armenian forces carried out indiscriminate attacks, launching unguided artillery rockets, and firing heavy artillery shells and ballistic missiles on population centers, including in some places where there were no evident military targets, causing civilian deaths and injuries.

The Armenian military also used banned cluster munitions in populated areas, resulting in dozens of civilian casualties. Cluster munitions have been banned because of their widespread indiscriminate effect and long-lasting danger to civilians.

Armenia confirmed its first Covid-19 case on March 1. On March 16, the government declared a state of emergency and extended it five times, ending it on September 11. In March, parliament passed amendments requiring telecommunications companies to provide authorities with phone records for all of their customers in order to facilitate tracking of people exposed to the virus.

For months, authorities refused to reveal information on the group of people in charge of the tracking system, saying that it was developed by volunteer programmers, free of charge; their names were eventually revealed without information about their affiliations. Authorities suspended the data-tracking after the state of emergency ended.

Around four thousand children were impacted by school closures. A rapid analysis of 3,000 families by World Vision Armenia showed that nearly 14 percent of school-age children in those households did not attend online classes. Nearly 80 percent of children lacked equipment and an internet connection.

According to Armenian Helsinki Committee, which monitored around 30 protests and rallies during the state of emergency, the police response varied considerably. In some cases, police did not intervene; in other cases, police terminated assemblies with fewer than five participants, including single-person protests, even when the protest participants wore masks and observed social distancing.

In April, the government approved a strategy and action plan for police reform for 2020-2022. The plan includes re-establishing an Interior Ministry and increasing parliamentary oversight over police. The reforms also envisage creation of a new patrol police and granting police investigative powers.

Despite Covid-19-related restrictions, protests against plans to restart construction on the Amulsar gold mine continued throughout the year. Protesters are concerned with the mine’s potential environmental and health impacts. Protests escalated towards the end of July, when private security personnel hired by the mining company removed makeshift cabins used by the protesters and replaced them with booths to be used by the security company. The escalation led to clashes with police. On August 4, police arrested more than 10 people, including protesters and security personnel. Several protesters accused the police of using excessive force in detaining protesters.

On August 6 and 10, protesters in Yerevan, observing social distancing, staged single person-pickets in support of the Amulsar protests. Police briefly detained them, citing Covid-19 restrictions. Among those detained were human rights defenders Nina Karapetyants, Zaruhi Hovhannisyan, and Ara Gharagyozyan. On August 6, authorities also banned a bicycle rally in support of the Amulsar protests, detaining several bikers. Police pressed misdemeanor disobedience charges and released all detainees within hours. Authorities did not interfere with further protests in support of Amulsar days later.

Violence against Women and Children

Media and civil society groups publicized several brutal cases of domestic violence, including a killing in March in Gyumri, when a man beat his female domestic partner to death. He also injured her 13-year-old daughter, who spent months in a hospital recovering from the assault. The man is awaiting trial on manslaughter and other charges. Domestic violence is neither a stand-alone felony nor an aggravating criminal circumstance in the criminal code.

According to official data, during the first half of 2020, authorities investigated 395 criminal domestic violence cases. They brought charges against 196 people and sent 62 cases to courts.

Coronavirus-related measures further jeopardized the security of domestic violence survivors. The Women’s Support center, a nongovernmental organization, reported in June that calls to their hotline were 50 percent higher than during the same period last year. However, it also noted that many women experiencing abuse may not have been able to reach out for help during lockdowns.

Armenia has only two shelters for domestic violence survivors, run by the Women’s Rights Center, with total capacity for 17 to 20 people. During the pandemic-related lockdown, the government did not take targeted measures to ensure victims of domestic violence could access shelters.

Reinforcement of traditional gender roles in some case put their health and life in danger during the pandemic. In one case, a 66-year-old woman died of complications from Covid-19 after doctors said her husband repeatedly refused testing and treatment for her.

Armenian law does not effectively protect survivors of domestic violence, jeopardizing their lives and well-being. The Council of Europe Convention on Preventing and Combating Violence against Women and Domestic Violence (Istanbul Convention) had not yet been sent to parliament for ratification. The government signed the convention in 2018.

In April, the government approved the 2020-2023 Comprehensive Program and Action Plan on Fulfillment of the Right to Live in a Family and Harmonious Development of the Child. The program features an alternative care service network, including specialized services for children with disabilities.

Armenia plans to guarantee inclusive education by 2025, whereby children with and without disabilities study together in community schools. Due to the pandemic, schools shifted to remote education in March, but largely reopened in September. According to one survey, more than half of the children with disabilities in Armenia only partially participated in remote classes. For some children, remote education increased accessibility of classes. But for others, it created additional barriers, due in part to lack of guidelines on providing inclusive education through remote education, as well as lack of support—called reasonable accommodations—necessary for inclusion, including assistive devices, hearing aids, books in braille, or other adjustments.

For several months, due to strict lockdown measures, community support service centers were closed, cutting children with disabilities off from such services as rehabilitation and therapy. The services restored partially as the authorities eased lockdown rules. According to authorities, the state largely continued to provide social services and food assistance to children and people with disabilities throughout the lockdown.

Adults with psychosocial or intellectual disabilities can be deprived of legal capacity, or the right to make decisions, and Armenia lacks supported decision-making mechanisms. A bill on rights of people with disabilities, which is to replace the outdated 1993 law and contains significant improvements, has not yet been introduced in the parliament.

Authorities approved and introduced to parliament a bill to ratify the Optional Protocol to the Convention on Rights of Persons with Disabilities, which would allow victims in Armenia access to an individual complaint mechanism for alleged violations of the convention.

Lesbian, gay, bisexual, and transgender (LGBT) people continue to face harassment, discrimination, and violence. The criminal code does not recognize homophobia and transphobia as aggravating criminal circumstances in hate crimes. Public debate around the ratification of the Istanbul Convention descended into hateful and derogatory speech against LGBT people by some public officials, who suggested incorrectly that the convention aims to promote LGBT “propaganda” and to legitimize same-sex marriage.

PINK Armenia, an LGBT rights group, documented 12 incidents of physical attacks based on sexual orientation or gender identity from January through July 2020, and 10 cases of threats and calls for physical and psychological violence. Police dismissed five of the twelve attack reports filed by victims, claiming absence of a crime, and suspended three cases, due to reconciliation of the parties.

In August, the Court of Appeal ruled there had not been a proper investigation into a violent homophobic attack in 2018 against a group of LGBT activists, which left at least six activists injured. The court ordered a re-investigation.

Fear of discrimination and public disclosure of their sexual orientation and humiliation prevent many LGBT people from reporting crimes. Openly gay men fear for their physical security in the military, and some seek exemption from obligatory military service. In one case, after a young man disclosed his sexual orientation during the investigation into his alleged draft evasion, the information was passed to a local official, who outed him to his family, urging his brother to “restrain him” for bringing shame to the family.

Armenia ratified the Council of Europe’s Convention on Protection of Children against Sexual Exploitation and Sexual Abuse (“Lanzarote Convention”), which enters into force in January 2021.

In September, parliament also ratified the Optional Protocol to the International Covenant on Economic, Social and Cultural Rights allowing access to the individual complaint mechanism.

In January, the United Nations Human Rights Council held the Universal Periodic Review of Armenia. In the council’s report, Armenia received numerous recommendations, including to ratify the Istanbul Convention without further delay; strengthen anti-discrimination policies; and criminalize all forms of torture and ill-treatment.

In December 2019, the Council of Europe's Committee for the Prevention of Torture and Inhuman or Degrading Treatment or Punishment (CPT) carried out a periodic visit to a number of Armenia’s police and penitentiary establishments, psychiatric facilities, and an institution for people with disabilities.