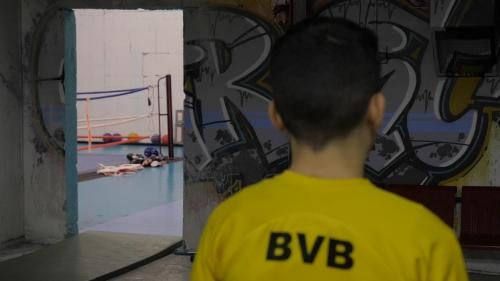 The 44-page report, “‘They Talk to Us Like We’re Dogs’: Abusive Police Stops in France,” documents repetitive, baseless police stops targeting minorities including children as young as 10, older children, and adults. These stops often involve invasive, humiliating body pat-downs and searches of personal belongings. Most stops are never recorded, the police don’t provide written documentation or usually tell people why they were stopped, and measures to improve accountability have been ineffective. Several of the children and adults interviewed said police used racial slurs.

I’ve had to undergo identity checks (from the police), I can’t tell you how many times. The first [time], I was 12 years old, it was next to a school. They pushed us up against the wall, I remember how disrespectfully they spoke to us. It was a relationship that started badly.

Face the wall. The wall is behind you. Take your hands out of your pockets. Please empty your pockets, thank you. All of your personal items on the windowsill.

We see abusive police stops every day, especially growing up here [Bobigny] I saw a lot of them. The first time I experienced a police stop, I must have been 10 years old. I was leaving my house, which is just over there. We were children, and the first experience we had with the police, the first contact, is a police officer aiming his weapon at you. It's scary. We were terrified.

“Jamal”, 13 years old:
I’ve been stopped twice. The first time, I was 9 or 10 years old. I thought that it wasn't normal that the police body search 10-year-old children.

It's really prejudiced. For [the police], we come from bad neighborhoods. Just based on your last name, sometimes they say you’re up to something.

Slim Ben Achour, Anti-discrimination lawyer:
In the poor neighborhoods, the police officers often know the kids that they stop, they even call them by their first or last name. So it’s an identity check that is misused because they check the identities of people they already know.

Hasnia Djerbi:
I could feel something, he didn't tell me straight away, but he was a bit... I mean, he was talking less, I learned some time later that he was stopped by the police and... Suspected of having drugs, he ended up in socks on the pavement in front of everyone in the center of Grenoble.

Slim Ben Achour, Anti-discrimination lawyer:
Identity checks in France, are in reality appearance based. No matter their behavior, a person can be stopped for a fear of a risk of breaching the public order. In today’s France, a skin tone can be considered a risk.

In the end, all it takes is a police stop like that, where your son is humiliated, and they make him feel that no, he is not a part of [society]. And that’s terrible for a mother.

Bakary Soukouna:
There are immediate consequences for the youth because it builds resentment, mistrust towards institutions. These kids are human, they have feelings. They respect who respects them and that includes the police.

This is a state of law, it’s the Republic of France. During a police stop, you shut up and obey.

The French police operates in opacity, there are never any control receipts. If you make the allegation of having experienced a discriminatory identity check, the state can say that it never occurred. And as long as we haven’t decided to speak seriously about these problems, we will be exposed to the dramatic consequences. The death of kids, or rupture with the republic’s institutions.

There should absolutely be laws protecting youth from abusive identity checks, and that regulate how they are checked. In my opinion, that’s the easiest thing, and yet it’s taking the longest to get done.