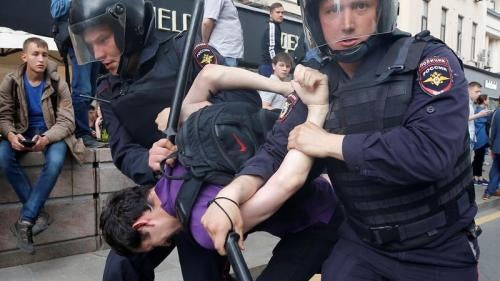 Russian police arbitrarily detained hundreds of people during peaceful protests on June 12, 2017, in Moscow and St. Petersburg. Human Rights Watch interviewed more than a dozen people detained during the protests. Riot police in both cities used excessive force against protesters. If protesters questioned their detentions or refused to go willingly, the police handled them roughly and in some cases dragged them on the ground, beat them with truncheons, kicked them with booted feet, and punched them. Some of the abuse took place in full view of observers who filmed it with video cameras and cell phones. People also experienced ill-treatment near or inside police buses.