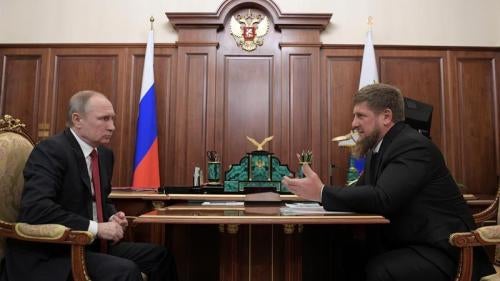 Chechnya's highest officials are on the record making abhorrent statements about LGBT people.

Police in Chechnya, a region in southern Russia, are rounding up men believed to be gay, holding them in secret detention, and beating and humiliating them. Sometimes police forcibly “out” these men to their families, hinting that they should be taken care of in an “honor killing.”

Tell Putin to end the crackdown on gay men in Chechnya and help protect those in imminent danger from coming to any harm.

“These [homosexual relations] are not traditional things; they are psychiatrically abnormal things. We don’t understand them.”

“If there were such people [gays] in Chechnya, law enforcement agencies wouldn’t need to have anything to do with them because their relatives would send them somewhere from which there is no returning.”

“Which reaction did you expect from spirited highlanders for whose ears even a fleeting mention of the mortal sin of Sodom is offensive?.. You should apologize to the Chechen people for the disgusting nonsense you’ve been publishing… You should finally stop this hysteria about non-existent threats...”

“In Chechnya, there are no gays, so there is no attitude toward them. Personally, I think that they belong two meters under the ground.”

“They Have Long Arms and They Can Find Me”