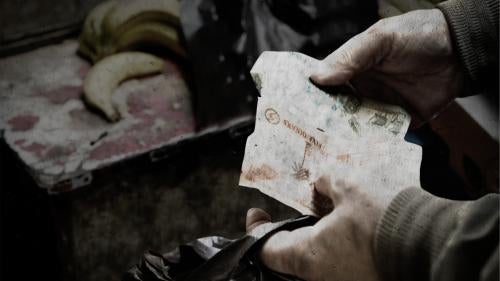 (Amman) – An alarming number of Jordanians end up in prison each year solely for failing to repay their loans, Human Rights Watch said in a report released today. Imprisonment for debt is a clear violation of international human rights law which few countries impose.

In the 47-page report, “‘We Lost Everything’: Debt Imprisonment in Jordan,” Human Rights Watch documents the harsh treatment of people unable to repay their debts. In the absence of an adequate social security net, tens of thousands of Jordanians feel compelled to take out loans to cover utilities, groceries, school fees, and medical bills. They often use unregulated informal lenders. Jordanian authorities should urgently replace laws that allow for debt imprisonment with effective personal bankruptcy legislation and enact social security protections to support indigent people.

“Under Jordanian law, if you take out a loan and can’t pay it, you go to jail,” said Sara Kayyali, a Middle East researcher at Human Rights Watch. “In many cases, people take out loans to pay for rent, groceries, medical bills. But instead of helping those in need, the authorities jail them.”

Failure to repay even small debts carries a penalty of up to 90 days in prison per debt, and up to one year for a bounced check. Over a quarter-million Jordanians currently face complaints of debt delinquency. According to government statistics, in the face of the country’s deteriorating economy, the number of people wanted for debt imprisonment rose tenfold in only four years, from 4,352 in 2015 to 43,624 in 2019. About 2,630 people, some 16 percent of Jordan’s prison population, were locked up for nonpayment of loans and bounced checks in 2019. Serving these prison sentences does not resolve the debt.

The report is based on Jordanian laws and policies, and interviews with 21 Jordanians, three Jordanian lawyers, three indebtedness and microfinance experts, a member of a humanitarian organization supporting indebted Jordanians, and two global financial experts.

Human Rights Watch found that the absence of regulations and oversight have allowed for the spread of informal and easily abused debt instruments. Judges often order imprisonment based on a promissory note alone, without seeing the borrower or providing an opportunity to dispute the debt or mount a defense though the law requires it.

The majority of women interviewed indicated that they took the loan to pay for necessities. In some cases, family members pressured them to apply to use the funds to make ends meet. Women often signed on as guarantors for their children’s or husband’s loans, making themselves subject to imprisonment for failure to repay.

“I am an engineer,” one woman interviewed said. “Imagine what would happen to my parents, how are people going to look at me? I am not a thief. I didn’t eat people’s rights. I just had too many financial commitments and the economic situation in the country is horrific.”

Debt imprisonment or threats of imprisonment can have a debilitating impact on a wide circle of people besides the debtor. Imprisonment of a head of household can leave a family without any means to secure necessities. Most of those interviewed said that they had lost their jobs due to imprisonment or indebtedness, and many felt compelled to flee the country, leaving their families to make ends meet.

Abolishing debt imprisonment remains contentious in Jordan, as many creditors contend that the penalty is needed to ensure repayment. Human Rights Watch found that debt imprisonment is one of the most inefficient ways of recouping loans, though. Most countries have abolished imprisonment for debt, not only because it is extremely harsh and violates international human rights law but because it does not lead to repayment, especially from the poor. Instead, debt imprisonment punishes those who cannot pay and helps create cycles of endless debt.

Debt imprisonment also increases the strain on the overcrowded and underresourced prisons and courts. Jordanian authorities pay 750 Jordanian Dinars (US$1,057) per month for each detainee, and their families become more reliant on government economic aid. To avoid overcrowding during the coronavirus pandemic, the Judicial Council announced in March 2020 that it would delay imprisoning people for debts under 100,000 JD ($141,000), and release those in prison until the health situation improves. But this positive step does not solve the problem, Human Rights Watch said.

Jordan’s Economic and Social Council, a government-affiliated policy center, in 2020 recommended gradually ending debt imprisonment. Both the council and the Justice Ministry told Human Rights Watch that a working group under the ministry’s auspices is reviewing the recommendations and will make its own recommendations to the government and parliament.

The government and parliament should replace article 22 of the Jordanian Execution law, which allows for the imprisonment of borrowers who default on their debt, with legislation that instructs judges to explore alternatives, assess the ability of debtors to pay, and develop repayment schedules based on the borrower’s financial capabilities. The law should clearly differentiate between those unable to pay and those unwilling to pay, and treat those committing fraud accordingly.

The government should also expand and make more accessible existing support programs so that people do not have to borrow to cover basic necessities. Donors and international financial institutions, such as the World Bank and the European Bank for Reconstruction and Development, should ensure that microfinance institutions they fund publicly commit not to seek imprisonment for people unable to repay their loans and assess their practices to ensure compliance with that commitment.

“Locking people up because they can’t afford to pay their debts is not only a basic violation of human rights, it compounds the problem by creating cycles of debt,” Kayyali said. “Jordan should abolish debt imprisonment and adopt alternatives that respect people’s rights and help the economy.”