(Beirut) – Syrian state and non-state actors have subjected men, boys, transgender women, and nonbinary people to sexual violence during the Syrian conflict, resulting in severe physical and mental health consequences which are compounded by a lack of support services in Lebanon, Human Rights Watch said in a report released today.

The 77-page report, “‘They Treated Us in Monstrous Ways’: Sexual Violence Against Men, Boys, and Transgender Women in the Syrian Conflict,” found that men and boys have been vulnerable to sexual violence in the Syrian conflict since it began. People Human Rights Watch interviewed said that gay and bisexual men, transgender women, and nonbinary people were subject to increased violence based on their actual or perceived sexual orientation or gender identity. Transgender women are often perceived as gay men in Syria and are targeted for the same reasons.

Sexual Violence Against Men, Boys, and Transgender Women in the Syrian Conflict

“Gay and bisexual men, transgender women, and nonbinary people said they were targeted for sexual violence during Syria’s conflict for being perceived as ‘soft’.” said Zeynep Pınar Erdem, fellow in the lesbian, gay, bisexual, and transgender (LGBT) rights program at Human Rights Watch and author of the report. “Men and boys – regardless of their sexual orientation or gender identity – are vulnerable to sexual violence in Syria and often remain unseen and without the support all survivors of sexual violence urgently need.” 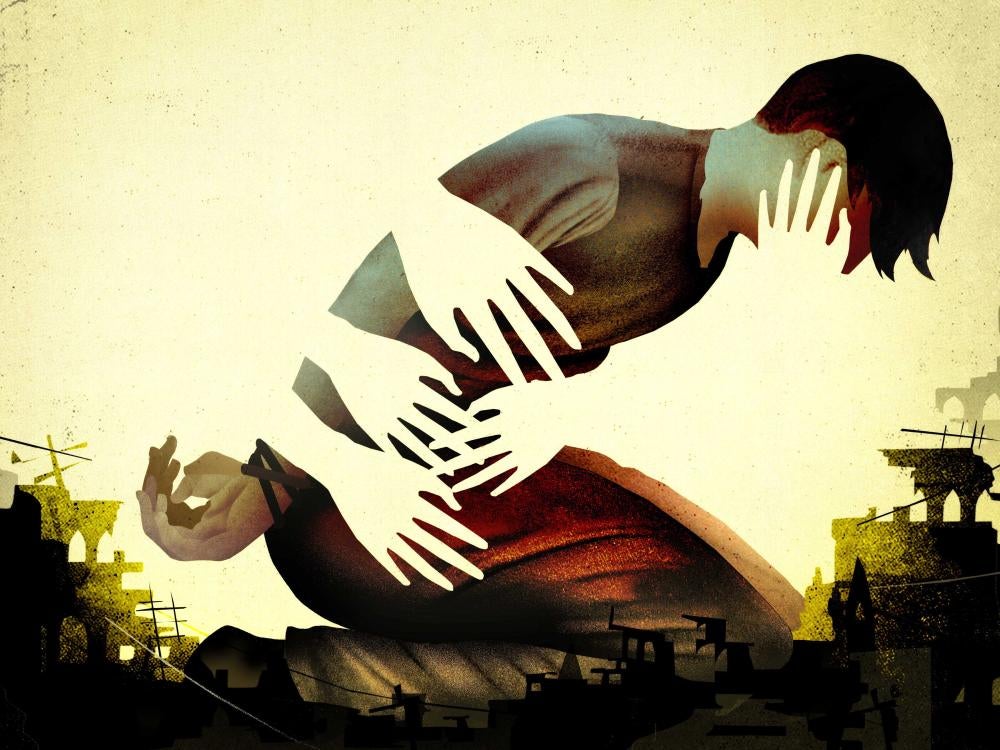 Many people have been subjected to sexual violence during Syria's civil war, resulting in ongoing trauma. Men and transgender women are particularly vulnerable. Z. Pınar Erdem, the Promise Institute for International Human Rights Fellow at Human Rights Watch, discusses her new report, and how we can help these sexual violence survivors.

Interviewees said they were harassed and sexually abused at checkpoints because they were “soft looking,” meaning perceived as effeminate in this context. In detention centers, detainees were subject to intensified interrogation or torture if their sexual or gender identity was exposed. Sexual violence also took place within the ranks of the Syrian army. Interviewees described being subject to rape, genital violence, threat of rape, forced nudity, and sexual harassment.

Survivors told Human Rights Watch that they did not seek medical or mental health services in Syria for many reasons, including shame, fear, and stigma, and a lack of trust in the health care system. The survivors who fled to Lebanon told Human Rights Watch they found limited services and inadequate support from humanitarian organizations that are often poorly funded and not equipped to meet the needs of male survivors of sexual violence. Service providers often lack training in response to male survivors and some belittle them, which contributes to poor treatment and re-traumatization of those seeking help.

Survivors described a range of emotional and psychological symptoms, including symptoms consistent with depression, post-traumatic stress, sexual trauma, loss of hope, and paranoid thoughts. They also suffer physically, including severe pain in their rectum and genitals, rectal bleeding, and muscle pain, and may have contracted sexually transmitted infections (STIs), including HIV.

In 2013, the UN Security Council for the first time stated in Security Council Resolution 2106 that conflict-related sexual violence also affects men and boys. The United Nations Refugee Agency (UNHCR) and nongovernmental organizations, including All Survivors Project, the Women’s Refugee Commission, Lawyers & Doctors for Human Rights, and the Refugee Law Project, have provided significant documentation on the nature and extent of sexual violence perpetrated against men and boys in Syria and elsewhere, and the specific needs of male survivors.

In March 2018, the Independent International Commission of Inquiry on the Syrian Arab Republic published a report with detailed evidence on sexual violence against men and boys in Syria. On April 23, 2019, the UN Security Council adopted resolution 2467 on conflict-related sexual violence, which recognizes that men and boys are targets of sexual violence in both conflict and post-conflict settings. Resolution 2467 acknowledges the need for enhanced medical and mental health support for survivors and calls on UN member countries to ensure that they receive nondiscriminatory access to medical and psychosocial care based on their needs.

Humanitarian organizations and service providers in Lebanon should provide targeted medical services, including mental health support, to both male and female survivors of sexual violence. They should train their staff including case managers, social workers, and frontline medical workers on the specific needs of men, boys, and transgender women.

“Men and boys and trans women can experience deep shame, stigma, and silence due to sexual violence. It is vital to challenge the social and cultural assumptions that they should be invulnerable,” said Erdem. “Services need to be funded, and tailored to support their access and care, without diverting funding from services for women and girls.”

Yousef, a 28-year-old gay man, was detained by the Syrian intelligence agencies. He told Human Rights Watch that he was not detained because he was gay, but once his sexual orientation was revealed, sexual violence during interrogations increased drastically:

All the aggression was multiplied by 10 I would say. They were happily doing it. They were of course raping us with sticks. They rape you just to see you suffering, shouting. To see you are humiliated. This is what they like to see. They had a stick inside my anus, and they started saying, ‘This is what you like, don’t you like it?’ It went up till my stomach.

Naila, a 21-year-old transgender woman described being gang raped in a central prison as a minor:

They brought the stick of a mop and they inserted it in our anus. A strong bleeding started, and we were mutilated.