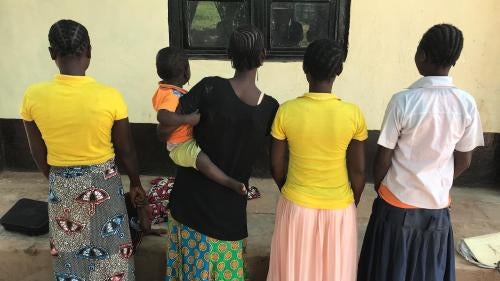 (New York) – Armed groups attacked hundreds of schools in the Kasai region of central Democratic Republic of Congo during the 2016-17 conflict, said the Global Coalition to Protect Education from Attack (GCPEA) in a report released today. The violence affected all children, but girls were particularly harmed, used as “magical” forces that would ward off bullets despite being unarmed, and raped and forcibly “married” to troops.

The 76-page report, “‘All That I Have Lost’: Impact of Attacks on Education for Women and Girls in Kasai Central Province – Democratic Republic of Congo,” is based on over 55 interviews with female students, as well as principals, and teachers from schools that were attacked in the region. They describe how militiamen raped female students and school staff when they attacked schools or when girls were fleeing an attack, or abducted girls from schools, purportedly to join the militia, but instead raped or forced them to “marry” militia members. Others were recruited and forced to fight with the militia. Often, they were placed on the front lines armed only with a broom or kitchen utensil, because they were believed to provide magical protection to the whole unit. Many children are believed to have been killed by the Congolese armed forces, including many girls who were being used by the armed groups as human shields.

The Congolese army (Forces armées de la République Démocratique du Congo, FARDC) attacked at least 38 schools in the Kasais and committed other serious violations in the course of suppressing the Kamuina Nsapu militia, including unlawfully targeting civilians and committing summary executions, rape and other abuses. FARDC, as well as the Kamuina Nsapu militia, used schools for military purposes, thereby compromising the civilian status of the schools and making them a legitimate target of attack.

“Young girls were raped, abducted, and recruited during attacks on their schools in the Kasais. Militias believed in girls’ magical powers, and often used them as the first line of defence to rustle their skirts to ward off soldiers with guns,” said Diya Nijhowne, GCPEA’s Executive Director. “There is a critical need to protect schools from becoming sites of extremist violence, particularly against girls.”

Women and girls continue to suffer from the aftermath of the violence in the Kasai region. Although both boys and girls had their education interrupted, girls often found it more difficult to return to school, GCPEA found. The conflict exacerbated the precarious economic situation of many families in the region. When unable to pay for all their children to attend school, parents often prioritized their sons’ education. Families are also more likely to keep their daughters home because of fears for their safety and the risk of sexual violence. Moreover, the severe stigma of rape prevents victims from returning to school, and those who do face social exclusion.

Other long-term consequences of sexual violence include gynecological problems, such as sexually transmitted infections, and pregnancy.

Being out of school, even for relatively short periods, increases the risk of early marriage for girls. Once married, girls often find it difficult to return to school because of household responsibilities, opposition from their husbands, or early pregnancy, with its accompanying host of health risks.

Girls and women have the right to education without fear of abduction, recruitment, or sexual violence. Even in the context of an active conflict, governments can take steps to reduce harm to students, including by endorsing the Safe Schools Declaration and implementing it in a way that responds to the particular needs of women and girls. GCPEA offers some guidance on how this can be done.

The Safe Schools Declaration is an intergovernmental political commitment to protect students, teachers, schools, and universities from attacks by armed forces and armed groups, as well as to restrict military use of educational infrastructure. The declaration includes a range of commitments, linked to specific, concrete actions that can reduce the risk of attack and mitigate their impact. Since May 2015, 87 countries from all regions of the world have endorsed the Safe Schools Declaration, including the Congo.

Attacks on education have a devastating impact wherever they occur. In the past five years, GCPEA has documented more than 14,000 attacks in 34 countries it has found to have experienced a systematic pattern of attacks on education. Armed forces and armed groups were also reportedly responsible for sexual violence in educational settings, or along school routes, in at least 17 countries, including the Congo, during the same period.

On May 27-29, 2019, the government of Spain will host the Third International Conference on Safe Schools, which will provide an opportunity for states to showcase the progress they have made in implementing the Safe Schools Declaration. Attendees will consider how women and girls may be differently impacted by attacks on education, and how the Declaration can be better used to meet their needs.

“As governments gather in Spain, the targeting of girls and women for sexual violence during attacks on schools in the Congo’s Kasai region should serve as a grim reminder of the need to be particularly vigilant about protecting girls’ education,” said Nijhowne. “The Safe Schools Declaration is a tool that countries should endorse and use to protect women and girls and their right to education.”

For selected quotes, please see below. The names of all survivors and witnesses have been changed to pseudonyms to protect their privacy.

“I was engaged before, but after [my fiancé] heard I was raped, he never contacted me again. He never even called to ask me how I was... I always think about my studies and all that I have lost. I can’t stop thinking about how those guys smelled and the way they fell on me. They smelled so awful. I can’t stop thinking about it...” Noelle A., who was raped during a militia attack on her school in Luiza territory

One of the militiamen followed me into the bush… If I did not agree to what he wanted, he said he would kill me. What he did to me was so painful. I could not stop crying…. After he finished, he went away and left me lying on the ground.” Chloé M., an 11-year-old primary school pupil when her school was attacked in Kazumba territory

“The militia went to the classrooms and were selecting girls to take away. They captured 10 girls and took them to the tshiota (ritual fire). Although they said they were selecting them to be baptized, they were really selecting them to rape and to become militia “wives.” These girls were held for several months and ultimately came back to their parents very weak, and some pregnant.”  Yves M., a primary school principal from Demba territory

“The militia leaders gave us girls a broom, which was considered magic. I was given a wooden [kitchen utensil] that was supposed to be a magic gun that the soldiers could not defeat…. After that, I went with them wherever they went and participated in several battles. I later realized that we would not be able to defeat soldiers with the magic. They were killing us in large numbers.” Lucia N., a secondary school student in Dibaya territory

With the arrival of the soldiers, we thought we would be safe, but we were fooling ourselves. We couldn’t imagine that they would do worse than what the militia had done. We thought they would protect us, but … they were shooting at anyone they saw… When we returned, they started raping our daughters... so many were raped. As a result, many girls dropped out of school. Oscar K., secondary school principal from Kazumba territory

“Only one of the six girls who were raped [at my school] came back to school, but she is not well.  She was too young, and the rape caused her to suffer serious injury. Even after all her suffering, we know her classmates make fun of her.”  Martin K., a primary school principal from Demba territory

“Among our students, those who were raped find it difficult to return to school. We observed that one girl student who was raped was too ashamed to continue. And I saw another girl who raised her hand to answer a question in class. Her classmates laughed at her and said she had been raped. The next day she did not come back to school.”  François L., a high school teacher from Luiza territory

The Global Coalition to Protect Education from Attack was formed in 2010 by organizations working in the fields of education in emergencies and conflict affected contexts, higher education, protection, and international human rights and humanitarian law that were concerned about ongoing attacks on educational institutions, their students, and staff in countries affected by conflict and insecurity. GCPEA is a coalition that includes United Nations agencies and non-governmental organizations. GPCEA is a project of the Tides Center, a non-profit 501(c)(3) organization.