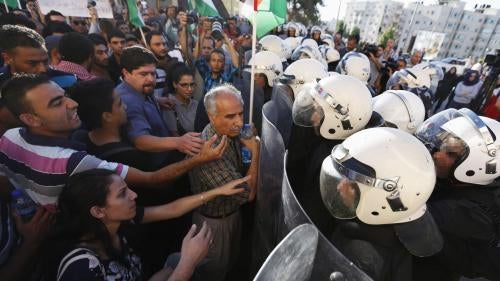 (Ramallah) – The Fatah-led Palestinian Authority in the West Bank and Hamas authorities in Gaza routinely arrest and torture peaceful critics and opponents, Human Rights Watch said in a report released today. As the Palestinian Authority-Hamas feud has deepened, each has targeted the other’s supporters.

The 149-page report, “‘Two Authorities, One Way, Zero Dissent:’ Arbitrary Arrest and Torture Under the Palestinian Authority and Hamas,” evaluates patterns of arrest and detention conditions in the West Bank and Gaza Strip, 25 years after the Oslo Accords granted Palestinians a degree of self-rule over these areas and more than a decade after Hamas seized effective control over the Gaza Strip. Human Rights Watch detailed more than two dozen cases of people detained for no clear reason beyond writing a critical article or Facebook post or belonging to the wrong student group or political movement.

“Twenty-five years after Oslo, Palestinian authorities have gained only limited power in the West Bank and Gaza, but yet, where they have autonomy, they have developed parallel police states,” said Tom Porteous, deputy program director at Human Rights Watch. “Calls by Palestinian officials to safeguard Palestinian rights ring hollow as they crush dissent.” 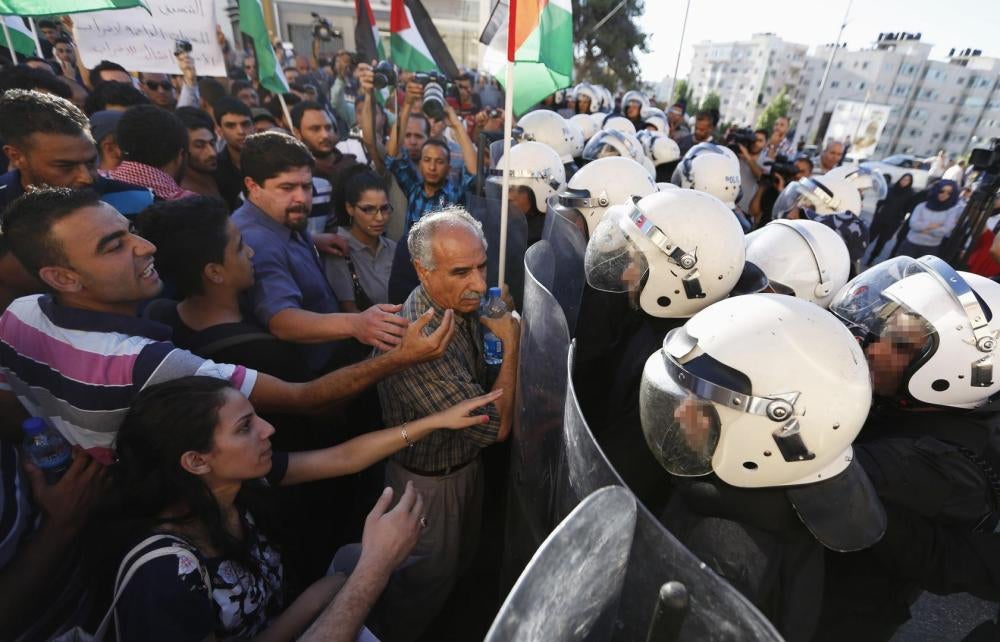 Human Rights Watch interviewed 147 witnesses, including former detainees and their relatives, lawyers, and representatives of nongovernmental groups, and reviewed photographic evidence, medical reports, and court documents. The report reflects substantive responses to the findings from the main security agencies implicated in the underlying abuses.

Systematic arbitrary arrests and torture violate major human rights treaties to which Palestine recently acceded. Few security officers have been prosecuted and none have been convicted for wrongful arrest or torture, as far as Human Rights Watch has been able to determine.

The European Union, the United States, and other governments that financially support the Palestinian Authority and Hamas should suspend aid to the specific units or agencies implicated in widespread arbitrary arrests and torture until the authorities curb those practices and hold those responsible for abuse accountable.

“The fact that Israel systematically violates Palestinians’ most basic rights is no reason to remain silent in the face of the systematic repression of dissent and the torture Palestinian security forces are perpetrating,” said Shawan Jabarin, executive director of the Palestinian human rights organization al-Haq and a member of the Human Rights Watch Middle East and North Africa Advisory Committee.

Both authorities deny that abuses amount to more than isolated cases that are investigated and for which wrongdoers are held to account. The evidence that Human Rights Watch collected contradicts these claims.

Palestinian authorities often rely on overly broad laws that criminalize insulting “higher authorities,” creating “sectarian strife,” or “harming the revolutionary unity” to detain dissidents for days or weeks, only to release most of them without referring them to trial, but often leaving charges outstanding. Palestinian Authority security forces also held 221 Palestinians for various periods between January 2017 and August 2018 in administrative detention without charge or trial under a regional governor’s order, according to the Palestinian statutory watchdog Independent Commission for Human Rights.

A number of former Palestinian Authority detainees interviewed by Human Rights Watch had also been detained by Israel, which coordinates with Palestinian Authority forces on security issues. In Gaza, Hamas authorities sometimes condition release on the detainee signing a commitment to halt criticism or protests.

In the cases documented, Palestinian forces often threatened, beat, and forced detainees into painful stress positions for prolonged periods, including using cables or ropes to hoist up arms  behind the back. Police often used similar tactics to obtain confessions by people detained on drug or other criminal charges. Security forces also routinely coerced detainees into providing access to their cellphones and social media accounts. These measures appear aimed at punishing dissidents and deterring them and others from further activism.

While the authorities regularly receive citizen complaints and have systems to investigate them, only a minority have resulted in a finding of wrongdoing, according to data provided by the agencies. Even fewer led to an administrative sanction or referral for criminal prosecution.

The systematic practice of torture by Palestinian authorities may amount to a crime against humanity prosecutable at the International Criminal Court (ICC). Human Rights Watch has long encouraged the ICC prosecutor to open a formal probe into Israeli and Palestinian conduct in Palestine, which is a party to the ICC.

The US and European states provide support to Palestinian Authority security forces. While the US in 2018 slashed funding for health and education services for Palestinians, including all its support for the United Nations Relief Works and Agency (UNRWA), it continued to set aside funding for security forces, including allocating US $60 million in International Narcotics Control and Law Enforcement (INCLE) nonlethal assistance to Palestinian Authority security forces for the 2018 fiscal year and $35 million for the 2019 fiscal year. Qatar, Iran, and Turkey financially support Hamas authorities. All of these countries should suspend assistance to agencies that routinely torture dissidents – including, for the Palestinian Authority, the Intelligence Services, Preventive Security, and Joint Security Committee, and, for Hamas, Internal Security – as long as systematic torture and other serious abuses continue.

“The attacks by both the Palestinian Authority and Hamas on dissidents and demonstrators, reporters and bloggers, are both systematic and unpunished,” Porteous said. “Governments that want to help the Palestinian people develop the rule of law should not support security forces that actively undermine it.”

“I was heading home. At the Einab checkpoint, I happened to see the prime minister’s convoy being held up on the checkpoint. I filmed this scene. After the car I was in and the convoy was allowed to cross the checkpoint, we were stopped by one of his escorts. I was arrested and taken to the station of the Preventative Security Forces in Tulkarm. I was detained in Tulkarm and in Ramallah for four days.”

“I had written on a hot summer day, ‘Do your children [referring to Hamas leaders] sleep on the floor like ours do?’ I think the post bothered security forces and, as a result, I was summoned to appear before Internal Security and later was charged with the crime of ‘misuse of technology’… I was detained for 15 days... Later, I was released after an agreement with the Interior Ministry. The agreement pledged not to write or incite against the government.”

“A plainclothes officer met me at the door [of the Intelligence Services Prison in Jericho]. He blindfolded me, handcuffed my hands behind my back, and started hitting me and slamming me against the walls… this lasted for about 10 minutes. The officer took me to the warden’s office and took the blindfold off, telling me that this was my “welcome”... [an officer] then said hang him, as in take him to shabeh. I was transferred from the office to the toilets, there they blindfolded me again, handcuffed me behind my back, put a piece of cloth and rope at the center of my handcuffs and pulled it up to the side of the door. There was a hook between the door and the ceiling. They pulled the cloth up, raising my hands behind my back. My legs were not shackled, and the tip of my legs were touching the ground. I was held in this stress position for 45 minutes. An officer hit me with a big stick on my back, between my shoulders, more than once... After they put me down, I felt my hands were numb up to my shoulders and I could not hold myself up… [the next day] the Juicer (nickname for his interrogator in Jericho) told me that ‘I promise you that you will not leave this place except on a wheelchair.”

“I was forced to stand blindfolded the entire day in a room called the bus. There were 5 or 10 people with me. On occasion they sat us down in small chairs, but we needed permission for everything we did, including sleeping or speaking. I spent 30 days there… After the first day, the beating started, they asked me to open my hands and started striking me with a cable and whipping my feet.”

“I still have nightmares… [that] the cell is strangling me and I cannot breathe.”

“The guys are afraid of writing. They don't try. They don't share. They don’t even put “like” to anyone who wrote anything criticizing the government. They are scared.”

“I feel I am being monitored, as if I’m under a microscope. I was released, but, until now, I feel I am not free. They broke our desire to defend citizens’ rights.”

“I live in a country where it is forbidden to express my opinion. This country is not the one we dream about, not at all. I don’t think that there is a Palestinian who would accept that all this struggle would go, and all the years of our lives, not just ours, but those before us, so that in the end we would have a system of government that has taken the shape of a dictatorship. It cannot be… it is very painful that we have a regime before ever having a state. Our problem with the PA is that they are building security forces and controlling people when we don’t even control the checkpoint.”