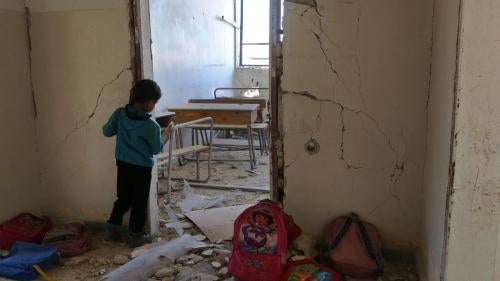 (New York) – Deliberate and indiscriminate attacks on schools and universities, their students, and staff have become more widespread over the last five years, the Global Coalition to Protect Education from Attack (GCPEA) said in the 2018 edition of its flagship report, released today. The 300-page report, Education under Attack 2018, identifies more than 12,700 attacks from 2013 through 2017, harming more than 21,000 students and educators.

Over the last five years, 41 countries each suffered at least five attacks on education, including at least one in each country that was intentional or deadly. This marks a dramatic increase from the 2014 edition of the report, when GCPEA documented 30 countries experiencing this level of attacks on education between 2009-2013.

“Teaching and learning has become increasingly dangerous, with the lives of students, teachers, and academics frequently put at risk,” said Diya Nijhowne, Executive Director of GCPEA. “Schools and universities should be safe and protective spaces, but armed forces and armed groups continue to turn them into sites of intimidation and violence.”

The report includes profiles of 28 countries that experienced at least 20 attacks on education from 2013 through 2017. GCPEA found that nine countries either suffered more than 1,000 attacks on education, or suffered attacks that harmed more than 1,000 students, teachers, professors, or other education personnel. These include: the Democratic Republic of Congo (DRC), Israel/Palestine, Nigeria, the Philippines, South Sudan, Syria, and Yemen.

For instance, more than 1,500 schools and universities in Yemen were damaged or destroyed by airstrikes and fighting, or used for military purposes. GCPEA found reports of at least 650 incidents of attacks on education, or military use of schools, in Syria. In the Philippines, armed parties reportedly harassed or intimidated at least 1,000 students and teachers.

In 18 of the profiled countries, attacks on education deliberately targeted female students and educators. Some extremist groups bombed girls’ schools or set them on fire, or killed, injured, or threatened female students and teachers. For example, about one-quarter of reported attacks on schools in Afghanistan targeted girls’ schools. Worldwide, armed parties also sexually abused or raped women and girls in or close to schools. In one example, armed militiamen in the DRC reportedly abducted eight girls from a primary school and raped them over the course of three months in 2017.

Schools and universities in 29 countries were used for military purposes between 2013 and 2017, including as bases, barracks, detention centers, or for other military purposes. These military uses increase the risk that affected schools and universities will be attacked by opposing forces, that children will be recruited into armed groups, or that students and educators will be targeted for sexual violence. For instance, a school in Ukraine used by various armed forces and armed groups for storing weapons was hit by artillery fire on six occasions in January and February 2015.

Armed forces and armed groups also recruited child soldiers at schools in 16 of the 28 profiled countries. In one incident in December 2013, some 413 children from schools in the town of Rubkona in South Sudan were forcibly recruited and sent into combat.

Attacks on higher education occurred in 52 countries globally, including all of the profiled countries. The attacks included violent repression of education-related protests that harmed students or education staff, or physical abuse or threats made because of the content of scholarship. Attacks on higher education buildings occurred in 20 profiled countries, including Kenya, where gunmen killed at least 142 students and injured another 79 on April 2, 2015, during an attack on Garissa University College.

“Several trends contributed to the abuses described in the report,” said Amy Kapit, GCPEA Research Director. “These include attacks by extremist armed groups, such as the ‘Islamic State’; the use of aerial bombardment to fight armed groups; and violence against students during protests at school or university.”

Amidst this violence there is an emerging global consensus that schools and universities must be protected as safe spaces in the middle of war. Over one third of UN member states, 74 countries, have endorsed the Safe Schools Declaration, a political commitment championed by Norway and Argentina.  By  endorsing the Declaration, states commit to take concrete steps to protect education, including by implementing the Guidelines for Protecting Schools and Universities from Military Use during Armed Conflict. The number of states endorsing the Declaration has doubled in less than three years and GCPEA’s new report calls on all states to join and implement the Declaration as its key recommendation for protecting education in armed conflict.

In addition, Sustainable Development Goal 4, Quality Education, a global commitment to achieving universal and equitable quality education by 2030, includes an indicator measuring Number of attacks on students, personnel and institutions, recognizing the imperative to safeguard education in armed conflict.  The Education under Attack series has been selected as a source for measuring progress towards achieving this indicator.
“Education under Attack 2018 underscores the immense human suffering caused by attacks on education,” Nijhowne said. “By endorsing and implementing the Safe Schools Declaration, including tracking attacks on education to respond more effectively and enable accountability, countries can begin to secure safe education for all.”

The Global Coalition to Protect Education from Attack (GCPEA) includes: co-chairs Human Rights Watch and Save the Children, the Council for At-Risk Academics (Cara), the Institute of International Education (IIE), Education Above All Foundation (EAA), and UN agencies. GCPEA is a project of the Tides Center, a non-profit 501(c)(3) organization.

This study is the result of independent research conducted by GCPEA. It is independent of the individual member organizations of the Steering Committee of GCPEA and does not necessarily reflect the views of the Steering Committee member organizations. GCPEA assembled data for its report from UN agencies; non-governmental organizations; government bodies; research organizations; media reports; and information shared by country-level experts and working groups. The study is the fourth in a series. The previous editions of Education under Attack were published in 2007 and 2010 by UNESCO and in 2014 by GCPEA.

Generous support for Education under Attack 2018 has been provided by the Education Above All Foundation, the Norwegian Ministry of Foreign Affairs, and an anonymous donor. EAA has been working to prevent attacks on education and partnering with GCPEA since 2011. Columbia University’s Mailman School of Public Health contributed in-kind research support. The NoVo Foundation has also been a supporter of GCPEA’s work.