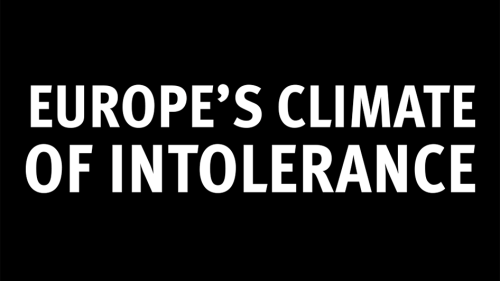 Responding to a simple request from a Human Rights Watch colleague for examples of intolerant rhetoric by European leaders, led us to an unavoidable conclusion: racist, xenophobic, anti-immigrant and anti-Muslim speech is now a part of everyday politics in Europe.

In a short video released today, we include statements since 2015 from leaders in Austria, Belgium, the Czech Republic, France, Germany, Hungary, Italy, the Netherlands, Poland, Slovakia and the United Kingdom. Not all are from radical right populists – and we could have added many more.

What is truly disturbing is how normal and expected many of them seem. They are so familiar in our politics now that, when we read the words in a newspaper or on Twitter, or hear them on the radio, we may be inclined to shrug our shoulders and dismiss the speech as mere rhetoric.

That would be a mistake.

Parties that espouse xenophobic, anti-immigrant and anti-Muslim policies enjoy support in many parts of Europe. In some countries, they are now part of governing coalitions. And even when they are not in government, they are shaping the political debate as the Party for Freedom did in the 2017 Dutch elections.

The creeping normalisation of this hateful rhetoric is not taking place in a vacuum. Human Rights Watch’s new World Report notes that in 2017:

Recent Europe-wide opinion polling suggests that migration and terrorism are the top aggregate concerns among voters. So, politicians avoid addressing those issues at their electoral peril.

But real leadership means engaging in policy debate about complex challenges without simplistic solutions.  It means recognizing the truth expressed in Martin Niemöller’s poem “First they came…” that demonizing unpopular groups leads down a dark path that puts everyone’s rights at risk.

On the continent of Auschwitz and Srebrenica, we need leaders who understand how quickly hate can engulf us and the inoculation provided by solidarity, respect for universal human rights and the rule of law.