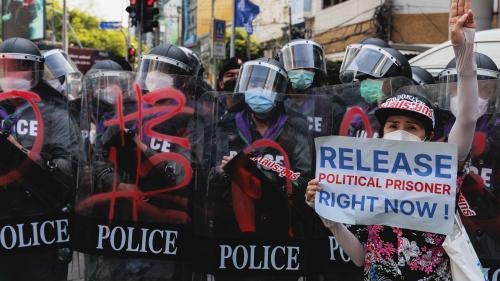 Restrictions on Freedom of Expression, Assembly

As of September, the Thai Lawyers for Human Rights reported that at least 1,860 people had been prosecuted since mid-July 2020 for exercising freedom of expression and assembly.

Since the government ordered the nationwide enforcement of the Emergency Decree on Public Administration in Emergency Situation in March 2020 to control the spread of Covid-19, at least 1,469 people have been prosecuted under this draconian law—primarily for taking part in democracy protests. Police and prosecutors have leveled charges such as violating social distancing measures, curfew restrictions, and other disease control measures. Most of these criminal cases were not dropped after the government lifted the emergency measures on October 1.

In November 2020, Prime Minister Prayut ordered authorities to use all laws against democracy protesters, bringing back lèse-majesté (insulting the monarchy) prosecution under article 112 of the penal code after a three-year hiatus. Authorities have since charged at least 215 people under Article 112 in relation to various activities undertaken at democracy protests or comments made on social media. In addition, making critical or offensive comments about the monarchy is also a serious criminal offense under the Computer-Related Crime Act. Authorities have also charged some political activists with sedition under Article 116 of the penal code.

Authorities held outspoken critics of the monarchy—including Tantawan Tuatulanon, Netiporn Sanesangkhom, Nutthanit Duangmusit, and Sophon Surariddhidhamrong—in pretrial detention for months in lèse-majesté cases. These activists were released on bail only after agreeing to restrictive conditions, such as full or partial house arrest, wearing tracking devices, being banned from criticizing the monarchy and taking part in political rallies, and not being allowed to leave Thailand.

Officials enforced similar bail conditions on several leaders and members of pro-democracy groups, including Arnon Nampha, Parit Chiwarak, Jatupat Boonpattararaksa, Panupong Jadnok, and Chonticha Chaengrew. As of October, at least 10 dissidents remained in pretrial detention for participating in democracy protests or committing acts that authorities considered to be insulting or offensive to the monarchy. At time of writing, some of them had already been locked up for over 200 days.

Judicial interpretation of lèse-majesté offenses seems to vary according to interpretations by different courts, making convictions arbitrary and sometimes going beyond what is stipulated in the law. In September, the Bangkok South Criminal Court sentenced Jatuporn Sae-Ung to three years in prison on lèse-majesté charges for wearing a Thai national dress at a democracy protest in a context that authorities claimed was done to mock Queen Suthida.

The momentum of the youth-led democracy uprising, widely known for its iconic three-finger salute, was seriously disrupted by the government’s criminal prosecutions, violent crackdowns, and pervasive surveillance and harassment of protesters. Democracy protests briefly returned to the street in October in response to the Constitutional Court’s ruling on September 30 that permitted Prime Minister Prayut to remain in office, after opposition parties submitted a petition challenging that he had stayed longer as prime minister than the eight years allowed by the constitution.

On August 24, the House of Representatives approved and passed the Prevention and Suppression of Torture and Enforced Disappearance Bill. The law will become effective 120 days after the government announcement in the royal gazette on October 24.

Torture and enforced disappearance have long been problems in Thailand. Most reported cases have not been resolved, and hardly anyone has been punished.

Human Rights Watch documented numerous cases related to counterinsurgency operations in Thailand’s southern border provinces, in which police and military personnel tortured ethnic Malay Muslims in custody. There are also credible reports of torture being used as a form of punishment of military conscripts. During the five years of military rule after the 2014 coup, many people taken into incommunicado military custody alleged that they were tortured or otherwise ill-treated while being detained and interrogated by soldiers.

In addition, police and military units often carried out anti-drug operations without effective safeguards against torture and other abuses. In August 2021, police officers tortured to death a suspected drug trafficker in Nakhon Sawan province. Authorities arrested the commanding officer and six of his subordinates. In June, the Central Criminal Court for Corruption and Misconduct Cases sentenced them to death (later reduced to life imprisonment) on murder charges.

Since 1980, the UN Working Group on Enforced or Involuntary Disappearances has recorded 76 cases of enforced disappearance in Thailand, including the prominent Muslim lawyer Somchai Neelapaijit in March 2004. In recent years, at least nine dissidents who fled persecution in Thailand were forcibly disappeared in neighboring countries. In September 2021, the Working Group raised concerns in its annual report about enforced disappearances in the context of transnational transfers between Thailand and neighboring countries.

Thailand is a state party to the Convention against Torture and Other Cruel, Inhuman or Degrading Treatment or Punishment and also signed, but did not ratify, the International Convention for the Protection of All Persons from Enforced Disappearance.

The government has failed to fulfill its obligation to ensure human rights defenders can carry out their work in a safe and enabling environment.

Democracy activists and human rights defenders in Bangkok and other provinces reported being intimidated by officials to stop them from organizing or participating in protests, especially during the visits by cabinet ministers or members of the royal family.

Despite the adoption of Thailand’s National Action Plan on Business and Human Rights in 2019, Thai authorities failed to protect human rights defenders from reprisals and end the abusive use of strategic lawsuits against public participation (SLAPP). Former National Human Rights Commissioner and Magsaysay Award winner Angkhana Neelapaijit is one of the many activists hit with such retaliatory lawsuits.

The Global Alliance of National Human Rights Institutions restored the National Human Rights Commission of Thailand to A status in March. The current members of the commission have become more active in responding to human rights-related issues from political and civil rights to economic, social, and cultural rights.

The controversial Operations of Not-for-Profit Organizations Bill, which was approved in principle by the government in February 2021, faced strong domestic and international opposition because of the choking and controlling effects the draft law would have on all civil society organizations. The law also included broad restrictions on foreign funding for nongovernmental organizations (NGOs). After massive international criticism and a growing national campaign against the draft law, the government sent it back for further revisions to be done in an unspecified timetable by the Ministry of Social Development and Human Security.

Lack of Accountability for State-Sponsored Abuses

Despite overwhelming evidence that soldiers were responsible for most casualties during the 2010 political confrontations with the United Front for Democracy Against Dictatorship, known as the “Red Shirts,” which left at least 99 dead and more than 2,000 injured, no military personnel or government officials from the administration of then-Prime Minister Abhisit Vejjajiva have been charged.

The government also has failed to pursue criminal investigations of extrajudicial killings related to anti-drug operations, especially the more than 2,800 killings that accompanied then-Prime Minister Thaksin Shinawatra’s “war on drugs” in 2003.

The armed conflict in Thailand’s Pattani, Yala, Narathiwat, and Songkhla provinces, which has resulted in more than 7,000 deaths since January 2004, subsided in the first half of 2022 due partly to the announcement by the Thai military and Barisan Revolusi Nasional (BRN) to reduce violence during Ramadan. BRN leaders later criticized the government for lacking commitment and taking advantage of the situation to raid insurgent strongholds.

Since August, insurgent attacks of military targets and civilians increased despite ongoing dialogues between representatives of the government and BRN.

The government has failed to prosecute members of its security forces responsible for torture, unlawful killings, and other abuses of ethnic Malay Muslims. In many cases, authorities provided financial compensation to victims or their families in exchange for their agreement not to speak out against the security forces, and not file criminal cases against officials.

Thailand has not endorsed the Safe Schools Declaration, which outlines a set of commitments to strengthen the protection of students, teachers, schools, and universities from the worst effects of armed conflict.

BRN, meanwhile, continued to recruit children for insurgent activities in 2022.

Thailand is not a party to the 1951 Refugee Convention or its 1967 protocol. The authorities continued to treat asylum seekers as illegal migrants subject to arrest and deportation.

In September, immigration officials denied Thaw Nandar Aung, also known as Han Lay, democracy activist and former Myanmar beauty pageant winner, entry at Bangkok’s Suvarnabhumi Airport, raising concerns that she would be deported to Myanmar and could face harsh punishment for opposing the military junta. After intense international pressure, the government allowed her to resettle to Canada as a refugee. However, Thai officials’ frequent arrests and threats to deport Myanmar human rights and democracy activists and dissidents on the Thai-Myanmar border means the possibility of forced return of asylum seekers and refugees is a constant threat.

Authorities have made no progress in investigating the apparent enforced disappearance of exiled dissidents from Vietnam and Laos in Bangkok.

The government refused to let the UN refugee agency conduct status determinations for Lao Hmong, ethnic Rohingya and Uighurs, and people from Myanmar and North Korea. More than 50 Uighurs and several hundred Rohingya remain in indefinite detention in squalid conditions in immigration lockups.

The government has failed to adequately protect internationally recognized worker rights, such as the right to freedom of association and collective bargaining. Union busting continued in industrial areas, and union leaders faced harassment and dismissal by hostile employers. Migrant workers of all nationalities are barred by provisions in the Labor Relations Act 1975 from organizing and establishing labor unions or serving as a government recognized labor union leader.

While Thailand enacted the Gender Equality Act in 2015, implementation remains problematic. Most cases filed under the act feature discrimination against transgender people, who face barriers to health care, education, and employment because Thailand lacks a legal gender recognition procedure. There has been little progress in the parliamentary review of the Life Partnership Bill and the Equal Marriage Bill. If enacted, these draft laws could pave the way towards recognizing the fundamental dignity of same-sex couples and providing them with important legal protections.

The US, European Union and its member states, and other like-minded countries raised concerns about the government’s plan to introduce the NGO Law, as well as other major human rights issues. These countries have also been instrumental in providing protection for refugees, who are often arrested by the authorities and are at risk of refoulement.

In September, the EU and Thailand finalized their Partnership and Cooperation Agreement; negotiations stalled in 2014 after the military takeover and resumed in 2021.

Despite unresolved concerns raised by the member states and rights groups during the UN third cycle Universal Periodic Review (UPR) of Thailand in November 2022—such as torture, enforced disappearance, freedom of expression, association and peaceful assembly, refugees, death penalty, and impunity for state-sponsored rights abuses—and poor records on rights issues at regional and international levels, the government announced in September its intention to stand for election to the UN Human Rights Council for the 2025-2027 term.