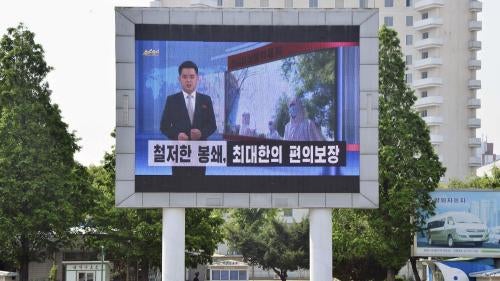 The Democratic People’s Republic of Korea (DPRK, North Korea) remains one of the most repressive countries in the world. Ruled by third-generation authoritarian leader Kim Jong Un, the government responded to the Covid-19 pandemic with deepened isolation and repression, increased ideological control, and by maintaining fearful obedience of the population by using threats of torture, extrajudicial executions, wrongful imprisonment, enforced disappearances, and forced hard labor.

The government does not tolerate pluralism, bans independent media, civil society organizations, and trade unions, and systematically denies all basic liberties, including freedom of expression, peaceful assembly, association, and freedom of religion and belief. North Korean authorities routinely send perceived opponents of the government to secretive political prison camps (kwanliso) in remote regions where they face torture and other ill-treatment, starvation rations, and forced labor. Collective punishment is also used to silence dissent.

The government systematically extracts forced, unpaid labor from its citizens to build infrastructure and conduct other government-ordered campaigns and public work projects. The government fails to protect the rights of numerous at-risk groups, including women, children, and people with disabilities.

In 2022, the North Korean government maintained extreme and unnecessary measures under the pretext of protecting against the spread of Covid-19, which isolated the country ever further by keeping its borders closed, restricting foreign trade to minimal levels, and limiting travel and distribution of food and other products within the country.

The North Korean government failed to protect economic rights, resulting in violations of the right to health, food, and access to an adequate standard of living in 2022. The impact of the nearly three-year-long Covid-19 nationwide country lockdown intensified as the country was hit by major droughts in May, and flooding in July and August. Meanwhile, in May, North Korea imposed more severe lockdowns across the country after it announced North Korea's first official Covid-19 case. The government continued to prioritize weapons’ development and conducted a record number of over 30 missile tests between January and October.

Moving from one province to another, or traveling abroad without prior approval, is illegal in North Korea and such restrictions were strictly enforced during the year, causing serious hardship. The government maintained heightened enforcement of a ban on “illegal” travel to China with border buffer zones set up in August 2020, which extend one to two kilometers from the northern border and operated continuously in 2022.

Border guards are under orders to “unconditionally shoot” on sight anyone entering or leaving without permission. There were several reports of border guards shooting North Koreans trying to leave the country, some resulting in death.

During the year, almost all international travel remained banned. In January, North Korea restarted cross-border rail trade and opened a “disinfection center” at Uiju, North Pyongan province, constructed in March-April 2021, where product quarantines lasted up to three months. It stopped it after a Covid-19 outbreak in Dandong in April and restarted it in September.

The government maintained enhanced restrictions on domestic travel because of Covid-19, with strict requirements for travel permits for those allowed to move. Authorities maintained increased road checkpoints, blocked inter-district movements, and enhanced enforcement to prevent “illegal” travel. These measures severely hurt people’s livelihoods and their ability to access food, medicines, and other essential goods, resulting in food insecurity and other serious problems.

Activist networks in China and South Korea that help North Koreans flee their country and transit China to a safe third country said they face major obstacles because of increased numbers of random checks on roads in China and greater surveillance.

Many North Koreans in China remained hidden in safe houses for months as the Chinese government sought to detain North Korean refugees and return them to North Korea, violating China’s obligations as a state party to the UN Refugee Convention. North Koreans fleeing into China should be protected as refugees sur place because of the certainty of punishment on return because they left without permission.

North Korean law states that leaving the country without permission is a crime of "treachery against the nation," punishable by death. The 2014 UN Commission of Inquiry (COI) on human rights in the DPRK found those forcibly returned by the Chinese government face crimes against humanity in North Korea. Very few North Koreans are escaping the country. Just over 1,000 North Koreans fled to the south in 2019, but only 42 reached South Korea between January and September 2022.

North Korea has a largely impoverished and malnourished population that is almost entirely unvaccinated against Covid-19. In December 2021, COVAX—an international initiative created in April 2020 to procure and distribute vaccines to low- and middle-income countries—allocated 8.12 million doses of Covid-19 vaccines for distribution in North Korea. By April, following North Korea’s unresponsiveness to introduce vaccines, COVAX reallocated those doses to other countries, so they could be used before they expired. North Korea was one of the only two countries in the world that had not yet started a vaccination program by that time.

In May, North Korea announced its first official Covid-19 case, when Kim Jong Un suffered a high fever after being in contact with a frontline worker with Covid-19 in a pharmacy visit in May, according to North Korean official media reports. In July, North Korea issued a decree threatening with the death penalty those “stealing or selling emergency medicines, … fake or faulty medicines.”

In May, North Korea reportedly received Covid-19 related aid from the Chinese government, but North Korea did not respond to offers of vaccines from the US, South Korea, and Russia. In August, Kim Jong Un declared victory over the Covid-19 outbreak, dropped its mask mandate and resumed normal public activities. Yet, in September, Kim Jong Un called on his country to start a vaccination program, over a year-and-a-half after other countries started vaccinating their populations. Vaccinations reportedly started being administered in the northern border city of Sinuiju, and the port city of Nampo, in August.

The North Korean government does not permit freedom of thought, opinion, expression, or information. All media is strictly controlled. Accessing phones, computers, televisions, radios, or media content that is not sanctioned by the government is illegal and considered “anti-socialist behavior” to be severely punished. The government regularly cracks down on those viewing or accessing unsanctioned media. It also jams Chinese mobile phone services at the border, and targets for arrest those communicating with people outside of the country or connecting outsiders to people inside the country.

As concerns over possible unrest increased due to people’s suffering during lockdowns, North Korea ramped-up ideological campaigns and restricted access to unofficial, unsanctioned information. In a letter in January, Kim Jong Un addressed farmers about the country’s “critical food problems,” but focused on asking farmers to stop selling products on the black market and to deal with deep-rooted anti-socialist behavior. Media outlets with contacts inside the country reported crackdowns on authorized cell phones at border regions, and further tightening controls over unsanctioned mobile phones and computers.

At some point in their lives, a significant majority of North Koreans must perform unpaid hard labor, often justified by the state as “portrayals of loyalty” to the government. Since punishment for crimes in North Korea is arbitrary, depending on a person’s record of loyalty, personal connections, and capacity to pay bribes, refusal of a government order to work as a “volunteer” can result in severe punishment, including torture and imprisonment.

North Korea remains one of only seven UN member states that has not joined the International Labour Organization.

North Korea uses songbun, a socio-political classification system that in its creation grouped people into “loyal,” “wavering,” or “hostile” classes, and justifies discriminating against lower classed people in employment, residence, or schooling.

North Korea has ratified six human rights treaties, but there is no evidence the government will effectively implement the treaties or any other human rights instruments. The 2014 COI report concluded that government officials are responsible for crimes against humanity. It recommended the UN Security Council refer the situation to the International Criminal Court.

The US government currently imposes human rights-related sanctions on North Korean government entities, as well as on Kim Jong Un and on several other top officials. In December 2021, the European Union extended human rights-related sanctions on two top government officials and the country’s top public prosecutor’s office. In April, the European Parliament passed a resolution on human rights in North Korea, which stressed the importance of accountability for past and ongoing crimes against humanity.

Japan continues to demand the return of 12 Japanese citizens whom North Korea abducted in the 1970s and 1980s. Some Japanese civil society groups allege the number of abductees is much higher.