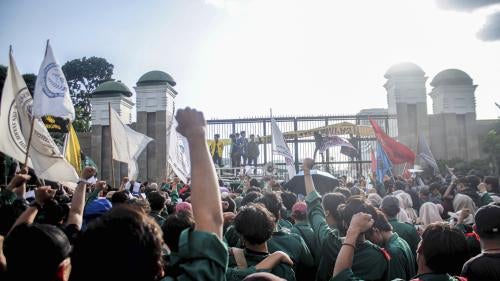 Indonesia was in the spotlight during the year, hosting the G20 summit on November 17-18 in Bali amid international tensions caused by the war in Ukraine, and friction in the region between the US and China.

The Indonesian government frequently violated basic civil and political rights, especially of disadvantaged groups, based on religious, ethnic, social, gender, and sexual orientation grounds. Military and police abused rights across the country with impunity, and especially in Papua and West Papua provinces where diplomats, foreign rights monitors, and international media are largely excluded.

President Joko “Jokowi” Widodo, whose term runs until 2024, did little to stand up for rights during the year. His government was distracted as it struggles to finance a US$30-billion mega project to move the flood-ridden and congested national capital from Jakarta to a remote area in Kalimantan.

Indonesia is currently revising its criminal code, and the current draft in the parliament is focused on the recognition of “any living law” in Indonesia. These “living laws” could be interpreted to include customary criminal law and Sharia (Islamic law) regulations at the local level, which include hundreds of ordinances and regulations that discriminate against women, religious minorities, and LGBT people. As there is no official list of “living laws” in Indonesia, this provision opens the door to widespread rights abuses through possible prosecutions under these discriminatory local regulations.

At time of writing, the Indonesian parliament was still considering passage of the criminal code, which is widely expected before the end of the year. Indonesian civil society groups and communities are mobilizing opposition against the proposed legislation.

Most of Indonesia’s provinces, and dozens of cities and regencies, impose discriminatory and abusive dress codes on women and girls. Human Rights Watch documented widespread bullying of girls and women into wearing a jilbab, and the deep psychological distress it causes to girls and women, and their families. Girls who do not comply have been ejected from schools, including state schools, or forced to withdraw under pressure, while female civil servants, including teachers and university lecturers, have lost their jobs or resigned. Many Christian, Hindu, Buddhist, and other non-Muslim students and teachers have also been forced to wear the jilbab. Human Rights Watch has documented these negative impacts caused by at least 64 mandatory jilbab regulations in Indonesia.

Violations of Right to Freedom of Religion and Belief

The 1965 blasphemy law and the so-called religious harmony regulation caused serious problems by making it easier for people to weaponize the toxic regulations against religious minorities in this predominantly Sunni Muslim country.

The harmony regulations, which give religious majorities in a community the veto power over activities of minority religions, make it virtually impossible for recognized religious minorities (Christians, Hindus, Buddhists, Confucians, and other smaller religions and beliefs) to construct houses of worship.

Worship and other religious activities face serious discrimination and sometimes criminalization for Islamic minorities in the country (Ahmadiyah, Shia) as well as adherents of small religions such as Jehovah’s Witnesses, and local faiths like Kejawen, Sunda Wiwitan. The government also did little to stop attacks by militant Islamic groups against religious minorities or hold such attackers accountable for rights abuses and destruction of houses of worship.

In April, authorities in Ciamis, West Java, prosecuted Muhammad Kace, a former Muslim cleric who converted to Christianity in 2014 and sentenced him to 10 years in prison for blasphemy against Islam. Kace’s alleged crime was making YouTube videos that criticized his former faith.

In Jakarta, a court sentenced Ferdinand Hutahaean, a Christian who converted to Islam, to five months in prison in April for simply replying to a tweet that “Your Allah is weak.”

Religious Affairs Minister Yaqut Cholil Qoumas became the target of an angry campaign after he had issued a February decree to regulate the volume on loudspeakers at mosques around the country. He asked mosques to use loudspeakers indoors and to limit the volume to 100 decibels when using them outside for the call to prayer. Two politicians reported him to the police for blasphemy against Islam after he had compared noisy mosques with barking dogs.

A politician named Roy Suryo, a former national cabinet member, became a blasphemy suspect after he had tweeted the picture of a Borobudur stupa, an image of which had been photoshopped to resemble President Jokowi. Kevin Wu, a leader of Dharmapala Nusantara, a Buddhist group in Jakarta, reported Suryo to the police in June; he has been detained since August for investigation and trial.

In March 2021, a state school in Tarakan, North Kalimantan province, allowed three Jehovah’s Witness students to move grades after denying them for three years due to their faith, despite their good marks. A court ordered the school to stop considering them “committing blasphemy.” A total of 22 children have faced similar problems elsewhere in Indonesia since 2016 but most parents sought to move their children to other schools that did not discriminate against them.

In September, Cilegon Mayor Helldy Agustian, in response to a Muslim group demonstration, banned the proposed construction of Maranatha church. The new church is designated to be part of the Batak Protestant Christian Church (Huria Kristen Batak Protestan, HKBP). The Ministry of Religious Affairs stated that Cilegon, a major steel production town, does not have a single church despite having nearly 9,000 Christians.

Officials continued to target lesbian, gay, bisexual, and transgender (LGBT) people. For example, on August 1, the Makassar police forced the cancellation of a gathering of more than 30 transgender women. Police in Sambas, West Kalimantan, disbanded a transgender fashion week gathering on September 7. Abdul Muthalib, the Sambas police chief, said that it had a request to close the fashion show from the Indonesian Ulama Council.

Rodrigo Ventocilla Ventosilla, a transgender man from Peru who travelled to Bali as a tourist, died on August 11 while in police custody  after he was allegedly mistreated and discriminated against by police.

Indonesia has also increasingly used other laws to target and prosecute LGBT people, including the 2008 Anti-Pornography law.

In September, a Jakarta military tribunal dismissed two sergeants and a sailor for same-sex conduct.  One of them was sentenced to six months in jail for having sex with two other male civilians.

Indonesia allowed a moratorium on new plantations permits to lapse that had been in place and continuously renewed since 2011. The government still maintains a permanent ban on granting new permits to clear primary forests and peatlands for plantations or logging. However, Human Rights Watch research showed that ongoing monitoring and oversight by relevant government agencies is poor, the plethora of existing regulations creates ambiguity, and private entities take advantage of these gaps to circumvent or not comply with the law.

Due to minimal ongoing monitoring and oversight, some of these plantations degrade the environment in which they operate, in some cases causing almost irreparable damage to peatlands, one of the world’s most important carbon sinks.

Military police arrested six soldiers in September suspected in the killing of four Indigenous Papuans in Timika, Papua province. The mutilated bodies of the four men were discovered outside the mining town of Timika, in sacks floating down the Pigapu River. The victims were identified as Irian Nirigi, a local village leader; Arnold Lokbere; Atis Tini; and Kelemanus Nirigi.

A rarely used Indonesian human rights court put Maj. (ret.) Isak Sattu on trial for alleged crimes committed during a 2014 massacre in Papua. Sattu alone is charged with crimes against humanity for the killing of five Papuans, including four teenagers, on December 8, 2014, in the town of Enarotali, in Papua province. At least another 17 people were injured in the massacre, during which soldiers opened fire with live ammunition against peaceful protesters. On December 8, 2022, the court acquitted Sattu on all charges.

Expressing views in support of Papuan self-determination continues to be severely restricted and punished in West Papua and in other parts of Indonesia.

Indonesia, one of the world's top 10 emitters of greenhouse gases, is contributing to the climate crisis taking a mounting toll on human rights around the globe.

Estimates by Global Forest Watch (GFW) indicate a downward trend in forest loss in 2021, the most recent available data. Despite an official ban on primary forest clearing in force since 2011, the latest GFW data indicates Indonesia lost 203,000 hectares in 2021.

In Indonesia, people with real or perceived psychosocial disabilities continue to be shackled—chained or locked in confined spaces—due to social stigma, as well as inadequate support and mental health services.

In September, the UN Committee on the Rights of Persons with Disabilities expressed grave concern about “the prolonged use of harmful and forced practices against persons with psychosocial disabilities such as shackling, seclusion and restraints,” and recommended that the Indonesian government prohibit these, as well as forced medical interventions of people with disabilities, and develop non-coercive, community-based mental health supports and services.

President Jokowi sought to balance Indonesian relations with global powers. He became the first Asian leader to visit Kyiv and to meet with Ukraine’s President Volodymyr Zelensky, urging Russian ends to blockages of Ukrainian wheat exports to the world. Jokowi also met Russian leader Vladimir Putin in Moscow on July 1. Indonesia hosted the Group of 20 leaders in November in Bali, having all of them but Putin.

ASEAN (the Association of Southeast Asian Nations) failed to make any sort of progress on the Five Point Consensus roadmap that Myanmar junta head Sr. Gen. Min Aung Hlaing had agreed on in April 2021. Indonesia will become ASEAN chair in January 2023. Next steps to implement the ASEAN decision in principle to admit Timor Leste as the 11th member of the bloc will also likely be on the new chair’s agenda.

In October, at the UN Human Rights Council, Indonesia voted against a motion to discuss the human rights situation in China’s Xinjiang region. Indonesia’s vote against the motion, which failed 19 votes to 17, was crucial. Ukraine later announced its support for the motion, narrowing the final margin to one.