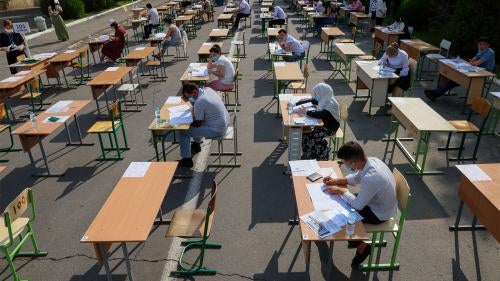 Since Uzbekistan’s President Shavkat Mirziyoyev assumed the presidency in 2016, the government has taken some concrete steps to improve the country’s human rights record.

During 2020, there were reports of torture and ill-treatment in prisons, most former prisoners were not rehabilitated, journalists and activists were persecuted, independent rights groups were denied registration, and forced labor was not eliminated.

On December 22, 2019, Uzbekistan held parliamentary elections. The Organization for Security and Co-operation in Europe’s Office for Democratic Institutions and Human Rights (OSCE ODIHR) noted that the elections “took place under improved legislation and with greater tolerance of independent voices but did not yet demonstrate genuine competition and full respect of election day procedures.”

Five registered political parties, all seen as loyal to the current administration, were allowed to run candidates in the elections, but no opposition parties or independent candidates were permitted to run for office.

Political Prisoners and Lack of Rehabilitation

More than 50 people imprisoned on politically motivated charges have been released since September 2016, including rights activists, journalists, and opposition activists. Uzbekistan has also reportedly released hundreds of independent Muslims, who practice Islam outside strict state controls, but this is impossible to verify. Many former prisoners have not been legally rehabilitated, meaning among other things that their unjust convictions have yet to be quashed and they have not received adequate medical treatment, despite being in poor health due to their imprisonment.

In March, Kashkadarya Regional Criminal Court of Uzbekistan fully acquitted rights defender Chuyan Mamatkulov, who in 2013 was sentenced to 10 years in prison on false charges and then released in 2018.

Uzbekistan’s security services continued to retain enormous power, which they can use to harass and detain perceived critics, despite a 2018 decree that reduced their powers. They continued to detain so-called enemies of the state, invoking charges such as treason.

In January, a military court in a closed session sentenced a former diplomat, Kadyr Yusupov, to five years and six months in prison for treason. At the end of April, Yusupov was placed in solitary confinement for 14 days after he complained of low wages for prisoners’ labor and prisoners not allowed to observe Ramadan. His relatives said that in retaliation he was physically and psychologically tortured when he went on a hunger strike. Yusupov was repeatedly not allowed to contact his lawyer securely. Uzbek authorities denied appeals by Yusupov’s relatives to change his prison sentence to house arrest during the Covid-19 pandemic due to his pre-existing medical conditions.

In another closed session, in March, a military court sentenced Vladimir Kaloshin, a former journalist of a Defense Ministry newspaper, to 12 years in prison on treason charges. Kaloshin was reportedly subjected to psychological torture consisting of threats of violence against his children, grandchildren, and wife. His trial was marred by procedural violations.

Thousands of others, most of them peaceful religious believers, remain in jail on overly broad “extremism” and other politically motivated charges. They include Mirsobir Hamidkariev, a film producer, and Ravshan Kosimov and Alisher Achildiev, who are soldiers.

In November 2019, Uzbekistan established a National Preventive Mechanism on torture, but did not ratify the Optional Protocol to the United Nations Convention Against Torture. The Uzbek government also announced in May its plans to establish a Committee to Prevent Torture that will oversee, among other functions, the investigation of allegations of torture and legal rehabilitation to victims.

In January 2020, the government announced that it was working on a new nongovernmental organization (NGO) code with the aim of streamlining legislation on civil society. However, the draft code fails to reform the existing restrictions. The government said the code would be revised, but Human Rights Watch is not aware of further steps that have been taken.

Azimbay Ataniyazov, human rights activist and founder of Chiroq, an NGO that focuses on monitoring forced labor in the cotton sector, received at least two rejections from the Ministry of Justice in response to applications to register his group. Two founding members stepped back from the group after being harassed and threatened by Uzbek authorities in February 2020. The ministry also has rejected four applications by released rights defender Agzam Turgunov to register an NGO called “Human Rights House” that would focus on human rights issues, including rehabilitation.

In August, the government published the Draft Law on Public Assemblies. The draft law requires organizers to apply for permission at least 15 working days before the planned date of a mass event, despite promises by Uzbek officials to bring the law in line with international rights standards.

In March, Uzbekistan introduced new charges in the criminal code for disseminating false information about the spread of Covid-19 and other dangerous infectious diseases, with hefty fines or up to three years in prison for violations. The government also significantly increased existing criminal punishments for offenses such as violating medical quarantine or refusing to submit to medical examinations or treatment, including up to seven years in prison if such actions are deemed to lead to the death of another person, and up to 10 years for multiple deaths.

In March, Uzbekistan closed schools due to the pandemic, which affected more than 8 million children. During the lockdown, the government set up distance learning for students, but reportedly faced difficulties in offering high quality public education services. As of September 2020, a quarter of schools reopened. UN agencies called on the government to improve access to water and basic sanitation facilities in schools to ensure a safe return to school, and reduce school-related infections.

Human Rights Watch noted in April that authorities were seizing electronic devices, including mobile phones and bank cards of people in quarantine who were diagnosed with Covid-19 or were suspected to have the coronavirus. Even though personal items can be easily disinfected and contacts for tracing of the virus given voluntarily,  the country’s deputy justice minister, Khudayor Meliev, claimed that these items may have been contaminated and were needed to track others who had had contact with the quarantined person.

There has been an increase in media activity, but media outlets have to operate within clear boundaries set by the government. Much of media is controlled by the state, self-censorship is common, and journalists face harassment and sometimes detention.

In December 2019, the Uzbek government reportedly unblocked access to some websites that were previously restricted, including the news outlet Buzzfeed, the music platform SoundCloud, and the internet archive Wayback Machine. However, in the same month, websites of rights groups, including the Association for Human Rights in Central Asia, International Partnership for Human Rights, Norwegian Helsinki Committee, and Uzbek Forum for Human Rights, were reportedly inaccessible for periods of time. Radio Ozodlik, the Uzbek service of Radio Free Europe/Radio Liberty, remains inaccessible.

The Uzbek government announced in January its plans to decriminalize defamation (article 139 of the criminal code) and insult (article 140). Activists and journalists in Uzbekistan told Human Rights Watch that Uzbek authorities continue to use these two offenses to silence critical voices.

Uzbek authorities started in August a preliminary investigation against independent journalist Bobomurod Abdullaev, reportedly on charges of “offenses against the president of the Republic of Uzbekistan” and “conspiracy to overthrow the constitutional regime,” after he had been detained and unlawfully returned to Uzbekistan by Kyrgyz authorities on an Uzbek extradition request. Abdullaev was not allowed to travel within Uzbekistan without permission or to leave the country. On October 23, the State Security Service (SGB) informed Abdullaev that a criminal case opened against him on June 29 had been closed and travel restrictions imposed on him lifted.

In July 2020, the Uzbek government published draft amendments to the Law on Mass Media. According to one report, the amendments would ease registration requirements for media outlets.

Consensual same-sex relations between men continue to be criminalized in Uzbekistan, carrying a prison sentence of one to three years. The country’s lesbian, gay, bisexual, and transgender (LGBT) population suffers deep-seated homophobia, persecution, and discrimination.

The United Nations Human Rights Committee noted in April in its concluding observations of the situation in Uzbekistan persistent inequality between men and women, including through perpetuation of gender stereotypes and limited representation of women in legislative and judicial bodies.

The committee also raised concerns about forced and early marriage, polygamy, and domestic violence, and lack of protection, services, and access to justice for survivors. Lack of systematic data collection makes it difficult to know the scale of violence against women in Uzbekistan. Reports of domestic violence increased during a Covid-19 related lockdown according to media reports.  At least one crisis center reported it could not accept survivors of violence for assistance during the lockdown. Neither domestic violence nor marital rape are explicitly criminalized.

Uzbekistan has made significant efforts to address child and forced labor in its cotton sector, but forced labor remained widespread despite a public decree prohibiting forced mobilization of public sector employees. According to the International Labour Organization, in 2019, 102,000 cotton pickers “were subject to some form of coercion.”

Positive steps included  the criminalization in January of the repeated use of forced labor, and the elimination in March of the production quota system.

In October, the Uzbek Forum for Human Rights found that the government forced employees of public institutions and enterprises to pick cotton or pay for replacement pickers during the 2020 harvest which started on September 15.  The Uzbek Forum also found “more cases of child labor than in recent years, when only sporadic cases were identified.” According the Uzbek Forum, it was “most likely due to the closure of schools because of the coronavirus pandemic, making children available to supplement their family’s income.”

Civil society groups fault the lack of fair recruitment and accountability systems for the continued reliance on forced labor.

In November 2019, the United Nations Committee Against Torture found that in Uzbekistan, “torture and ill-treatment continue to be routinely committed by, at the instigation of, and with the consent of the State party’s law enforcement, investigative and prison officials, principally for the purpose of extracting confessions or information to be used in criminal proceedings.” The committee also expressed concern over continued reports that judges and prosecutors “tend to disregard and decline to investigate” allegations that confessions were obtained through torture.

In its April concluding observations, the UN Human Rights Committee noted progress made in addressing human rights issues in Uzbekistan, but it expressed concerns about “torture and ill-treatment of people deprived of liberty, as well as restrictions on the freedom of conscience and religious belief, freedom of expression, freedom of association and peaceful assembly.” The committee also concluded that the definition of torture in the criminal code does not meet the requirements of the Covenant. It criticized the overly broad and vague definition of extremism in the Counter-Extremism Act.

In July, the US State Department’s Trafficking in Persons Report (TIP) kept Uzbekistan in its place on the “Tier II watch list” as the country does not “fully meet the minimum standards” to eliminate trafficking, but continues to make “significant efforts to do so.”

In its statement following the annual Human Rights Dialogue with Uzbekistan, the European Union expressed concerns over existing challenges “related to the freedom of expression, registration of NGOs, the persistence of torture and ill-treatment in the penitentiary system, gender equality and women’s rights, anti-discrimination.” The EU also called on Uzbekistan to “take further commitments to eradicate torture, including by granting unhindered and independent monitoring to detention facilities,” and “emphasized the need to rehabilitate former prisoners.”