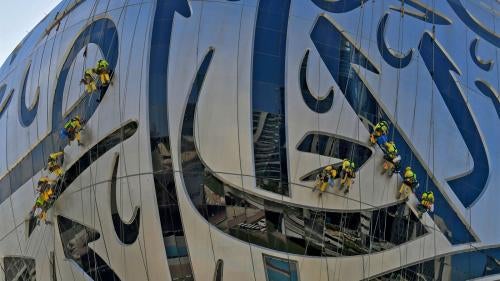 In 2020, United Arab Emirates (UAE) authorities continued to invest in a “soft power” strategy aimed at painting the country as a progressive, tolerant, and rights-respecting nation, yet its fierce intolerance of criticism was on full display with the continued unjust imprisonment of leading human rights activist Ahmed Mansoor, academic Nasser bin Ghaith, and other many activists and dissidents, some of whom had completed their sentences as long as three years ago and remain detained without a clear legal basis.

Prisons across the UAE held detainees in dismal and unhygienic conditions, where overcrowding and lack of adequate medical care is widespread. With the onset of the Covid-19 pandemic, detainees and prison staff were at heightened risk of contracting the virus.

In Libya, the UAE provided weapons and conducted air and drone strikes to support the Libyan Arab Armed Forces (LAAF) armed group, some of which killed and wounded civilians. In Yemen, UAE-backed Yemeni troops and armed groups committed abuses.

Scores of activists, academics, and lawyers are serving lengthy sentences in UAE prisons, in many cases following unfair trials on vague and broad charges that violate their rights to free expression and association.

Ahmed Mansoor, a leading Emirati human rights defender, remained imprisoned in an isolation cell for a third year, leaving him in precarious health. The UAE in 2017 detained Mansoor on speech-related charges that included using social media to “publish false information that harms national unity.” Authorities held him in an unknown location for more than a year with no access to a lawyer before sentencing him in May 2018 to 10 years in prison. On December 31, 2018, the UAE’s Federal Supreme Court upheld Mansoor’s sentence. Prominent academic Nasser bin-Ghaith, serving 10 years on charges stemming from criticism of UAE and Egyptian authorities, and university professor and human rights lawyer Mohammed al Roken, serving 10 years alongside 68 other people in the grossly unfair “UAE 94” trial, also remained in prison.

As of September 2020, UAE authorities continued to hold Khalifa al-Rabea and Ahmed al Mulla, two Emiratis who completed their sentences on state security charges two years and three years ago respectively. They were convicted in 2014 and 2016 on the basis of their ties to al-Islah, a legally-registered Islamist political movement that the UAE banned in 2014 as “terrorist.” Authorities arbitrarily kept them behind bars for “counselling,” according to Emirati activists.

Especially in cases purportedly related to state security, detainees were at serious risk of arbitrary and incommunicado detention, torture and ill-treatment, prolonged solitary confinement, and denial of access to legal assistance. Forced confessions were used as evidence in trial proceedings, and prisoners complained of overcrowded and unhygienic conditions and inadequate medical care.

In March, a 21-year old Emirati woman imprisoned on state security charges reportedly attempted suicide after prison authorities subjected her and a second prisoner to prolonged solitary confinement and denied them adequate medical care. UAE authorities did not carry out an independent investigation into the incident.

In May, a UAE court sentenced a 21-year-old Omani man to life in prison following what appears to have been a grossly unfair trial. Following his arrest, authorities subjected him to incommunicado detention, prolonged solitary confinement and ill-treatment. As of September, according to a family member, UAE authorities had denied him contact with the outside world for six months, raising serious concerns for his health and well-being, especially amid a reported Covid-19 outbreak in al-Wathba prison.

Covid-19 outbreaks occurred in at least three UAE detention facilities, worsening already- dismal prison conditions, including inadequate access to medical care and treatment and communication with the outside world.

Throughout 2020, UAE prison authorities denied non-national detainees living with HIV uninterrupted access to lifesaving antiretroviral treatment, in flagrant violation of their right to health. In at least two UAE prisons, detainees living with HIV were segregated from the rest of the prison population and faced stigma and systemic discrimination. Prisoners living with HIV in the UAE who have been denied adequate medical care are at risk of experiencing serious complications if infected with the Covid-19 virus.

On March 17, United Nations human rights experts called on UAE authorities to urgently reform “degrading conditions of detention” in UAE prisons. Despite international calls to do so, the UAE refused to allow independent international monitors to enter the country and visit prison and detention facilities.

Despite announcing the withdrawal of most of its ground troops from Yemen in 2019, the UAE remained part of the Saudi-led military operations, continued to maintain a presence in Aden and southern governorates, and continued to provide support for certain Yemeni forces who have committed grave abuses over the past several years.

In Libya, the UAE conducted air and drone strikes to support the Libyan Arab Armed Forces (LAAF), the eastern-based armed group under the command of General Khalifa Hiftar and one of two major Libyan parties to the armed conflict that began in April 2019, some of which killed and wounded civilians. One apparently unlawful UAE attack on a biscuit factory in the south of Tripoli in November 2019 killed eight civilians and wounded 27. According to media, UN, and other reports, the UAE carried out at least five other strikes that resulted in civilian casualties since April 2019. In addition to drones, the UAE supplied the LAAF with other weapons, ammunition, and combat vehicles, in violation of a 2011 UN Security Council arms embargo that prohibits such transfers, according to the UN Panel of Experts on Libya.

The UAE’s labor law excluded from its protections domestic workers, who faced a range of abuses, from unpaid wages, confinement to the house and workdays up to 21 hours to physical and sexual assault by employers. Domestic workers faced legal and practical obstacles to redress. While a 2017 law on domestic workers does guarantee some labor rights, it is weaker than the labor law and falls short of international standards.

The Covid-19 pandemic has further exposed and amplified the ways in which migrant workers’ rights are violated. Tens of thousands of migrant workers lost their jobs and were trapped in the country in dire conditions. Many lived through strict lockdowns in crowded and unhygienic housing. While thousands left the UAE after facing summary dismissals, many struggled to return to their home countries because of travel restrictions and expensive plane tickets, and were left unable to pay rent or buy food.

Many migrant workers also faced unpaid wages for work they had done before being dismissed. Authorities imposed stricter Covid-19 lockdown conditions on domestic workers, banning them from seeing anyone outside of their employer’s households and warning employers not to allow their domestic workers to meet anyone outside. Given that many employers already confine domestic workers to the household and overwork them, such conditions left them even more at risk of abuse, including increased working hours, no rest days, and physical and verbal abuse.

In March and April, Human Rights Watch and other international human rights organizations called on governments to take several steps to adequately protect migrant workers from the spread of the virus, including in immigration detention and labor accommodations.

Some provisions of the law regulating personal status matters discriminate against women. For a woman to marry, her male guardian must conclude her marriage contract. Men can unilaterally divorce their wives, whereas a woman must apply for a court order to obtain a divorce. A woman can lose her right to maintenance if, for example, she refuses to have sexual relations with her husband without a lawful excuse.

In 2019, the authorities introduced amendments to the personal status law that revoked a provision that had obliged women to “obey” their husbands. In August, they introduced other minor amendments tweaking the language of the 2019 amendments on obligations to appear more gender neutral. However, such changes merely remove discrimination in law but essentially still allow for judges to discriminate against women in practice.

Following amendments in 2016, the UAE’s penal code no longer explicitly permits domestic violence. On December 31, authorities passed a law on protections from domestic violence, which came into effect in March. While the law has some positive provisions, including protection orders for the first time (restraining orders against abusers), it contains problematic provisions.

It defines domestic violence as “any abuse, violence or threat committed by a family member against any other family member or individual exceeding his guardianship, jurisdiction, authority or responsibility, and resulting in physical or psychological harm,” suggesting that authorities can decide at what point male guardians have gone beyond their authority in disciplining their wives, female relatives, and children. It also requires that the public prosecution propose “conciliation” between the victim and the abuser before any criminal action is pursued.

In November, the UAE announced a series of legal reforms, including decriminalizing drinking or possessing alcohol and attempted suicide, allowing unmarried couples to cohabitate, and meaning men could no longer benefit from lighter sentences for assaulting a female relative for so-called honor crimes. The reforms, as announced, would also allow couples who married outside the UAE to follow the laws of their home country or the country in which they married in matters of divorce and inheritance.

Article 356 of the federal penal code criminalizes (but does not define) “indecent assault” and provides for a minimum sentence of one year in prison. UAE courts use this article to convict people for same-sex relations as well as consensual heterosexual relations outside marriage. Women are disproportionately impacted, as pregnancy serves as evidence of extramarital sex and women who report rape can find themselves prosecuted for consensual sex. The UAE’s penal code punishes “any male disguised in a female apparel and enters in this disguise a place reserved for women” with one year’s imprisonment, a fine of up to 10,000 dirhams (US$2,723), or both. Transgender women have been arrested under this law even in mixed-gender spaces.

Different emirates in the UAE have laws that criminalize same-sex sexual relations. In Abu Dhabi, “unnatural sex with another person” can be punished with up to 14 years in prison. Article 177 of Dubai’s penal code punishes consensual sodomy by imprisonment up to 10 years.

On August 13, the UAE and Israel announced that they had agreed to the full normalization of relations, paving the way for enhanced cooperation on cybersecurity and surveillance technology and sparking concerns it could lead to increased repression domestically and regionally.

The peace agreement, which was brokered by the United States, was accompanied by reports of a US sale of F-35 stealth fighter jets to the UAE. Israel is the only other country in the Middle East to have received F-35 jets.