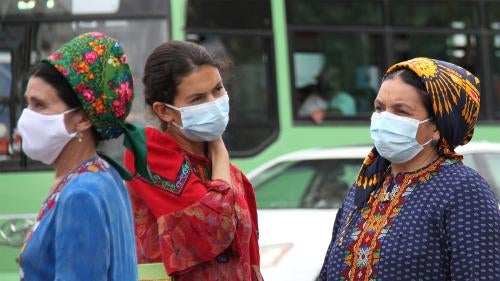 In 2020, Turkmenistan experienced cascading social and economic crises as the government recklessly denied and mismanaged the Covid-19 epidemic within the country.

The Turkmen government imposes punitive restrictions on media and religious freedoms, and tightly controls access to information. Independent activists, including in exile, face constant threat of government reprisal. Dozens of persons who have been forcibly disappeared, are believed to be languishing in Turkmen prisons. Arbitrary travel bans are routine.

As of October 2020, authorities claimed Turkmenistan had no Covid-19 cases. But media outlets have reported that numerous people died with Covid-19-like symptoms. In July, Radio Azatlyk, the Turkmen-language service of the US government-funded Radio Liberty, reported that there was a shortage of plastic bags and vehicles for transportation of corpses, and that health facilities in Ashgabat and Turkmenabat were overwhelmed with patients with Covid-19 symptoms.

Authorities coerced health workers into silence about the spread of Covid-19. Rights and Freedoms of Turkmen Citizens, a Prague-based independent group, reported that health workers are not provided with sufficient personal protective equipment (PPE), endangering their lives and health. Starting in June, the group received reports that authorities threatened doctors and nurses with criminal prosecution and that they would not be allowed to practice their profession if they refused to serve in facilities where people with suspected Covid-19 are isolated and treated. The group also reported that in July, authorities arrested on bogus hooliganism and other charges seven doctors in one region who had refused to follow orders to force patients with Covid-19 symptoms to pay for treatment. By October, the cases against them were dropped and they were released.

Turkmen Initiative for Human Rights (TIHR), an exile group, reported in July that authorities in Turkmenabat province threatened 120 health workers with prosecution, in response to their written plea to the regional administration to provide PPE and adequate equipment to treat what was described as a pneumonia outbreak there.

According to Rights and Freedoms, most medical workers were barred from bringing their mobile phones to work. An Ashgabat clinic forced doctors and nurses to sign nondisclosure statements, obliging them not to speak about conditions. TIHR reported in April that security officers detained a doctor working in a quarantine facility for two days for bringing his cell phone inside.

Turkmenistan’s government denies the existence of poverty in the country and failed to ensure an adequate standard of living and the right to food for economically vulnerable groups. Shortages of subsidized food, the rise of market prices, and a drastic reduction in the amount of remittances from abroad force people to stand in lines for hours hoping to purchase minimal amounts of staple foods. They often leave empty-handed. Food rationing did not ensure access to subsidized food. People experienced restrictions on purchases arbitrarily imposed at the state stores. There are no publicly available official data on the population’s food needs.

On September 25, President Gurbanguly Berdymukhamedov approved amendments to the constitution that propose the creation of a bicameral legislature, and guarantee ex-presidents a seat in the upper chamber. The amended constitution does not guarantee freedom to travel abroad or ban censorship.

In August, a police officer threatened to arrest Soltan Achilova, a correspondent for TIHR, for photographing a school bazaar in Ashgabat. In June, Natalia Shabunts, one of the country's very few openly active human rights defenders, told TIHR that for two weeks she was under surveillance by security agents.

Throughout the summer, Turkmen migrant workers in Turkey, Northern Cyprus, and the US held demonstrations to protest the government’s failure to address the Covid-19 pandemic, ensure food security, and provide assistance to residents whose homes were destroyed by a devastating hurricane.

On July 19, Turkish police, following a complaint of the Consulate of Turkmenistan, detained Dursoltan Taganova, a protest participant and activist with the émigré opposition movement “Democratic Choice of Turkmenistan.” In October, Taganova was released from detention in a deportation center and received a one-year international protection status in Turkey.

The Turkmenistan Helsinki Foundation (THF), a human rights organization in exile, and the Memorial Human Rights Center, an independent Russian group, and other sources reported detentions in Turkmenistan of people suspected of having links to the opposition abroad, and intimidation of these activists’ relatives in Turkmenistan. In some cases, authorities summoned relatives for questioning, threatened them with dismissal from their jobs, and even beat some.

In June, Murad Dushemov was detained in Ashgabat and placed under house arrest, following his YouTube appeal for the exiled opposition to unite. In August, Reimberdy Kurbanov was released, having served a sanction of 15 days’ detention for online communication with government critics abroad. In September, Pygambergeldy Allaberdyev was sentenced to six years on bogus charges under article 108 (intentional harm to health of moderate severity) and 279 (hooliganism) of the penal code for alleged connections with activists abroad. Authorities have denied Allaberdyev family visits and food and clothing parcels.

In July, an exile-run news website, Turkmen.news, reported that security officers in Turkmenistan repeatedly summoned the boyfriend of a woman who organized one of the protests in Turkey, beat, and ill-treated him.

In summer, unknown individuals broke into the Ashgabat apartment belonging to the Kyarizov-Serebryannik family, who had left Turkmenistan in 2015 and founded Rights and Freedoms. They smashed several windows and parts of the kitchen. The destruction took place shortly after the group gave an interview to Al-Jazeera in which they criticized the government’s response to Covid-19.

In May, TIHR reported that police briefly detained and questioned women after they surrounded a local official to express their frustrations over flour shortages.

Radio Azatlyk in April reported that nearly 100 women in Lebap province were threatened with 15 days’ detention for gathering outside the city administration building to demand flour. Dozens of people protested in Mary province in early April against shortages of government-subsidized flour and vegetable oil.

There is no media freedom in Turkmenistan. All print and electronic media is state-controlled. Foreign media can very rarely access Turkmenistan. Authorities suppress independent voices and retaliate against local stringers for foreign outlets.

Internet access in Turkmenistan remains heavily state-controlled. Many websites, including social media and messengers, are blocked. The government monitors all means of communications.

Following April’s severe hurricane in Lebap and Mary provinces, which caused serious damage and casualties, authorities detained dozens of people, accusing them of sending videos of the aftermath “abroad.” In May, TIHR and Rights and Freedoms reported that police in Turkmenabat detained about 66 people for several days, after discovering images and videos of the aftermath of the hurricane on their phones. Two women were charged with criminal offences.

Turkmen.news reported in September that access to IMO messenger was jammed and that many Virtual Private Networks (VPN)s services were blocked. In late August-early September, in-country calls and calls from abroad using Internet Protocols (IPs) were blocked. In October, access to Yandex and Google browsers were blocked for two days.

The Turkmen government enforces arbitrary bans on foreign travel on various groups of people. In August, TIHR reported that 213 Turkmen citizens (mostly women and children), holders of Turkish residence permits, were arbitrarily barred from leaving Turkmenistan. Another source reported that the authorities maintain a blacklist of 5,000 people barred from foreign travel, including civil servants and their families, and relatives of emigres, including protest activists.

According to Turkmen.news, in February, migration officers arbitrary removed about 20 people from a flight to Turkey, including two persons traveling for medical treatment.

The Turkmen government has not responded to a United Nations Human Rights Committee (HRC) request for information, communicated to the authorities in 2019 regarding the case of the Ruzimatov family, relatives of a former official who has emigrated. Authorities have banned Rashid Ruzimatov and his wife, Irina Kakabaeva, from traveling abroad since 2003, and his son Rakhim since 2014.

Forum 18, an independent religious freedom group, reported five men jailed for conscientious objection this year, bringing the number of imprisoned objectors to 11. All are Jehovah’s Witnesses. Two other objectors were released after completing their sentences.

In January, a court in Lebap province fined a homeowner for holding a Christmas celebration. In February, police raided two Protestants’ gatherings in Dashogus, fining some congregants.

The fate and whereabouts of many people, who disappeared in Turkmen prisons following convictions on what appear to be politically motivated charges, remain unknown. The exact number of political prisoners is impossible to determine because the justice system is untransparent and trials are closed in sensitive cases. Torture and ill-treatment continue to be endemic within the prison system.

Political dissident Gulgeldy Annaniazov, who should have been released in March 2019 after serving his full 11-year sentence, was subject to an additional five-year term of forced internal exile.

Dozens of prisoners remained victims of enforced disappearance or are held incommunicado, some for almost 18 years. The government has denied them access to families or lawyers. According to “Prove They Are Alive,” an international campaign, which seeks to end enforced disappearances in Turkmenistan, at least 10 forcibly disappeared have served the full terms of sentences handed down to them, but have not been released and their whereabouts are unknown.

In October 2019, Kasymberdy Garayev, a cardiologist from Ashgabat went missing for nearly one month after he came out, then briefly reappeared in the media to deny he was gay, before going silent again.

TIHR reported that in October 2019 regional health departments convened meetings to condemn the doctor's “amoral conduct.” In one region, the health department held a meeting with the heads of healthcare facilities in their areas, at which officials pressured staff to identify gay people, including among healthcare workers, and implied that failure to report people suspected of being gay would result in criminal charges.

After its July mission to Turkmenistan, the World Health Organization (WHO) stated that Turkmenistan had no “confirmed Covid-19 cases reported to the WHO,” but expressed concern about “an increased number of cases of acute respiratory infection and pneumonia,” and urged the government to “… send samples to WHO reference laboratories for confirmatory testing.”

During its annual human rights dialogue with Turkmenistan in June, the European Union conveyed strong concerns on individual cases, called for cooperation with United Nations special procedures, and noted that Turkmenistan was “considering” a visit by the UN Working Group on Enforced Disappearances. The EU urged authorities to update the National Human Rights Action Plan in line with recommendations made during the Universal Periodic Review before the UN Human Rights Council (UNHRC) and underlined that the ombudsperson’s office should engage on “all human rights issues, including enforced disappearances”.

Turkmenistan has failed to respond positively to any visit inquiry by UN special procedures since 2008, despite 15 pending requests for access.

A June statement by the US mission to the Organization for Security and Co-operation in Europe (OSCE) expressed concern about “many prisoners of conscience,” and requested an update on Annaniyazov and Omarkuliev.