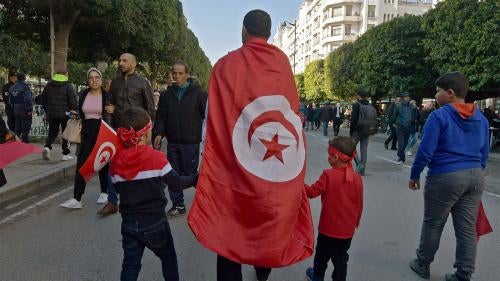 The 2019 legislative elections in Tunisia, the third to be held since massive street protests ousted previous president and autocrat Zine El Abidine Ben Ali in 2010, produced a fragmented parliament. The Islamist Ennahdha party came first, with 52 out of 217 seats, followed closely by Qalb Tounes Party, created in 2019 by media mogul Nabil Karoui.

In 2020, parliament made no progress in reforming laws that violate or threaten human rights. It also failed to agree on its allotted appointments of judges to the constitutional court, which could play a pivotal role in ensuring that laws conform with the rights provided by the 2014 constitution.

President Kais Saied, elected in 2019, renewed on May 30 a state of emergency that the government imposed following a 2015 attack in the capital Tunis that killed 12 members of the presidential guard.

The constitution of 2014 provided for a constitutional court to be put in place by 2015. However, because parliament has failed to agree on the four judges it is responsible for appointing, the court has not been able to start operating. The constitution endows the court with the power to void laws that are inconsistent with provisions of the constitution, including its human rights provisions.

Parliament also failed to create other authorities established by the constitution, such as the Human Rights Commission and the Commission on Corruption and Good Governance.

Freedom of Expression, Association and Assembly and Conscience

Authorities relied on repressive provisions of the penal code as well as other laws to punish speech, including criticism of public officials. Two social media activists, Anis Mabrouki, from Tebourba, and Hajer Awadi, from El Kef, were arrested in April in separate incidents and charged for criticizing on Facebook what they considered to be the government’s inadequate or corrupt response to financial hardship caused by the Covid-19 pandemic. Prosecutors charged both with “creating a public disturbance.” They also charged Mabrouki with “accusing public officials of crimes related to their jobs without furnishing proof of guilt” and Awadi with “insulting a civil servant.” The courts acquitted Mabrouki and sentenced Awadi to two-and-a-half months in prison and a fine; she was free on appeal at time of writing.

On May 4, judicial police summoned Emna Chargui after she re-posted on Facebook a short text entitled “Sura Corona,” written and formatted in the style of a Quranic verse (sura). The prosecutor charged Chargui with “inciting hatred between religions through hostile means or violence,” under article 52 of the press freedom decree-law. On July 17, a Tunis First Instance Court sentenced Chargui to six months in prison and a fine. In the wake of controversy and prosecution, Chargui left Tunisia.

The government took a step for transitional justice by publishing in its Official Journal, on June 24, the final report of the Truth and Dignity Commission, a body tasked by a 2013 transitional justice law to investigate and expose serious human rights violations that took place in Tunisia from 1955 to 2013. The five-volume report includes recommendations for political, economic, administrative, and security sector reforms to safeguard against a return to repression.

The 1978 decree-law enacted by Tunisia’s first president, Habib Bourguiba, governs declarations of a state of emergency. A draft law before parliament since 2018 would widen the powers of local and central authorities to restrict demonstrations and movement among other freedoms.

In November 2019, the counterterrorism prosecutor of the Tunis First Instance Court accused Mounir Baatour, a lawyer and president of Shams, a group that defends sexual minorities, of “incitement to hatred and to animosity between races, doctrines, and religions,” under article 14 of Tunisia’s overbroad 2015 counterterrorism law. The basis for the accusation was that he re-shared a post on his Facebook page that critics considered disparaging of the Prophet Muhammad. Baatour left Tunisia and obtained asylum in France.

Tunisian judges continued to pronounce death penalties but no one has been executed since a de facto moratorium took effect in 1991.

Tunisia allowed the return from Libya on January 23 of six orphaned children of Tunisian nationals who were suspected of being Islamic State members. At least 36 more children of suspected ISIS members remain stranded in Libya, as well as an estimated 160 Tunisian children believed to be held in camps in Syria or prisons in Iraq.

Tunisian women continue to face discrimination in inheritance under the 1956 Personal Status Code, which provides that sons inherit double the share of daughters. A landmark bill, based on a recommendation made by a presidentially appointed Commission on Individual Freedoms and Equality in 2017, would make equal rights in inheritance the default. People would still be able to opt out of the default and choose instead to have their wealth distributed as the current legal framework provides. Parliament has yet to consider the bill. On August 13, National Women’s Day, in Tunisia, President Kais Saied said he opposed equality in inheritance. On the same date two years earlier, the late President Beji Caid Essebsi had embraced recommendations for equality in inheritance.

The 1956 Personal Status Code—which was progressive for its time in the region, and also ahead of some European states—also discriminates against women by still referring to the husband as the “head of the family,” giving him legal advantages in disputes over household management. The current draft law amendments are directed only at the inheritance section of the Personal Status Code.

In April, the Ministry of Women, Family, Childhood, and Seniors opened a new shelter for female victims of domestic abuse. It also extended the hours of operation of the hotline for domestic violence complaints to 24 hours. The ministry said it received a significant increase in reports of domestic violence in late March during COVID-19 lockdown restrictions compared to the previous year. The ministry also introduced a mental health hotline to support families experiencing stress during the lockdown. Women reported difficulties in accessing protection orders (to prevent contact from their abusers), as per the 2017 Violence against Women law, due to court closures under lockdown.

Schools were closed in Tunisia in mid-March due to the Covid-19 pandemic and began re-opening in mid-September. Many children in public schools could not access education during the closures. In May, a National Statistical Institute survey of parents found that 66 percent of school-age children had engaged in no learning activities during the previous weeks, often due to a lack of remote learning options, study materials, or a lack of communication with teachers.

Authorities continued to prosecute and imprison presumed-gay men under article 230 of the penal code, which provides up to three years in prison for “sodomy.”