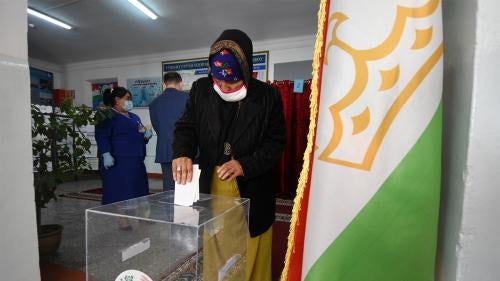 In 2020, Tajik authorities continued to jail government critics, including opposition activists and journalists, for lengthy prison terms on politically motivated grounds. They also intensified harassment of relatives of peaceful dissidents abroad and continued to forcibly return political opponents from abroad using politically motivated extradition requests. The government severely restricts freedom of expression, association, assembly, and religion, including through heavy censorship of the internet.

Until the end of April, the Tajik government denied the existence of the Covid-19 virus in the country and was late to introduce meaningful measures to slow its spread. Medical staff reported experiencing shortages of personal protective equipment.

The Organization for Security and Co-operation in Europe’s Office for Democratic Institutions and Human Rights (OSCE ODIHR) concluded that the March 2020 parliamentary elections “took place in a tightly controlled environment.” Voters had no genuine political alternatives as fundamental political rights and freedoms had been curbed, and “genuine opposition had been removed.”

Tajikistan held presidential elections on October 11. President Emomali Rahmon was reelected for a fifth term with 90.92 percent of the vote.

In May, Radio Ozodi, the Tajik service of Radio Free Europe/Radio Liberty (RFE/RL), reported that the Dushanbe Prison No.1 authorities had not introduced any measures to limit the spread of Covid-19. Prisoners were “required to gather in a small space for counting, most of the prisoners did not wear masks or gloves, and conditions … did not comply with sanitary standards.”

In June, Rakhmatullo Radjab, a senior member of the Islamic Renaissance Party of Tajikistan (IRPT) jailed at the same prison, did not receive medical assistance when he showed Covid-19 symptoms, according to his son, Shukhrat. He and other prisoners were not tested for the coronavirus and relatives had to provide loved ones with medicines themselves. Each prisoner was also given one face mask; all inmates shared one thermometer. On July 13, Justice Minister Muzaffar Ashurion said in a press conference that 98 prisoners had been infected with pneumonia and 11 had died from it since the pandemic’s start. He denied the existence of the virus in detention facilities in Tajikistan.

In August, prison authorities threatened prisoners to take them to a punishment cell if they communicated with jailed human rights lawyer Buzurgmehr Yorov, whose detention was deemed to be in violation of international law by the United Nations Working Group on Arbitrary Detention in 2019. Prison authorities had earlier attempted to make Yorov denounce IRPT in writing and its exiled leader Muhiddin Kabiri, but he refused.

On December 5, 2019, pursuant to a Tajik extradition request, Russian authorities detained a Group 24 activist, Khursand Najmiddinov, at the Vnukovo airport in Moscow, after he arrived from Austria, where he has asylum. On December 9, 2019, a court in Russia ordered Najmiddinov’s release. Following another Tajik extradition request, Group 24 supporter Jamshed Sharipov was detained by Russian authorities at the Moscow Sheremetyevo airport in February. He was released two days later.

In March, Austrian authorities extradited Hizbullo Shovalizoda to Tajikistan after denying him asylum. Shovalizoda was arrested upon arrival in Dushanbe, and accused of being an IRPT member and participating in an attempt to overthrow the government. The party reported that Shovalizoda had never been a member. In June, he was sentenced to 20 years in prison on vague charges of “organizing activity of an extremist organization” and “treason.”

In Kaunas, Lithuania, in March, two men brutally beat and injured an exiled Tajik activist, Ilhomjon Yakubov, in a politically motivated attack. Yakubov had previously received dozens of threats over messaging apps and social media. The Lithuanian police opened a criminal investigation into the attack and later that month detained one of the attackers.

Authorities continued to harass Tajikistan-based relatives of peaceful dissidents, both in the country and abroad.

In June, Farzona Sayfullozoda, daughter of imprisoned Hikmatulloh Sayfullozoda, an editor of the now-banned party newspaper, Najot, denounced IRPT in a video. Sayfullozoda “urged people not to believe IRPT and its leadership” and said that IRPT is “a terrorist party and she regrets everything that happened to her family.” According to Humayra Bakhtiyar, a Europe-based journalist and human rights defender, her statement was made under duress.

Also in June, the State Committee for National Security detained Asroriddin Rozikov, a son of an imprisoned senior member of IRPT, Zubaidullohi Rozik, on charges of “organizing activity of an extremist organization.” According to Rozikov’s brother Khisomiddin, Asroriddin was not involved in any political activity.

Thirteen family members of Jannatullohi Komil, an exiled IRPT member based in Germany, were harassed, detained, and questioned by Tajik authorities in June and July. Authorities also pressured them to testify on camera against the party. Three children were among the detained family members.

There was a total of over 80 attacks of all kinds, physical and non-physical, including cyber-attacks and “attacks via judicial or economic means,” on journalists in the country between 2017 to 2019, according to a report in April by the Justice for Journalists Foundation.

In February, the Supreme Court found an independent news outlet Akhbor.com, critical of the Tajik government, allegedly guilty of “serving terrorist and extremist organizations” and ruled to block the website.

The Dushanbe Shohmansur court in April sentenced a prominent independent journalist Daler Sharipov to one year in prison on charges of incitement of religious discord for printing copies of a dissertation.

On May 11, Asia-Plus journalist Abdullo Ghurbati, who had reported on Tajikistan’s Covid-19 outbreak, was beaten near his home in Dushanbe and was beaten again on May 29 in the southern village Uyali while on assignment. The two assailants of the first attack were not identified. Three men involved in the second attack were sentenced to a fine on charges of petty hooliganism.

On January 2, 2020, a Law on Countering Extremism came into force which allows authorities to further curb free expression. Since then, according to RFE/RL, at least 113 people, including university staff, students, entrepreneurs and public sector employees, have been arrested across Tajikistan, allegedly for being members of the Muslim Brotherhood movement, which the government has banned. Some accused were reportedly denied access to lawyers and their relatives.

In February, at least 30 Brotherhood suspects were released after they had spent 10 to 20 days in detention. In March, a court in Khatlon region sentenced Komil Tagoev, an alleged member, to a year in prison following his earlier arrest on charges of “organizing activity of an extremist organization” and “religious discord.” In August, Sughd Regional Court in a closed trial sentenced another 20 people to between five and seven years in prison on extremism charges. One person was sentenced to a fine “for failing to report a crime.”

Dr. Pratibha Mehta, the UN Development Program Resident Representative in Tajikistan, in a speech at the meeting of the National Committee for Population Development in November 2019, stated that “24% of women aged 19-49 in Tajikistan” experienced physical or sexual violence and “97% of the perpetrators of violence [against] women [who are or have been married] are reported to be their current or former husbands.”

In July, the head of the Committee on Women and Family Affairs, Hilolby Kurbonzoda, stated that in response to the increasing number of domestic violence complaints, the committee established a resource centre with a 24-hour hotline.

The head of "Nachoti Kudakon”, a Tajikistan-based women’s rights group, Kurbongul Kosimova, in June said there was a significant increase of domestic violence complaints in the first three months of the pandemic. She noted that laws concerning family violence are insufficient and domestic violence should be criminalized as a stand-alone offense.

On June 29, 12 US senators in a letter to Rahmon called for the release of Yorov, the lawyer, and Sharipov, the journalist, on health and humanitarian grounds in the context of Covid-19.

The European Union raised a range of concerns during its annual human rights dialogue with Tajikistan in November 2019. It urged Tajikistan to “facilitate access to information for all journalists, and ensure free access to the Internet, news websites and social media for all citizens.” The EU noted that “there is a shrinking space for human rights in Tajikistan, whereby political opponents are imprisoned, and members of their families and their lawyers harassed,” and also called for criminalization of domestic violence.

In May, the EU, German, and French ambassadors to Tajikistan urged the government to ensure that freedom of expression and media freedom are allowed in the country without restrictions. In July, the EU encouraged Tajikistan to improve its human rights record in order to stand a better chance of being granted preferential access to the EU market through the EU’s GSP+ scheme.

In February, Harlem Désir, then-OSCE representative for freedom of the media, called on the Tajik government to immediately release Daler Sharipov. In May, he appealed for the prosecution of the May 11 attackers on Ghurbati, and expressed his concern over the Tajik Supreme Court blocking access to Akhbor.com.