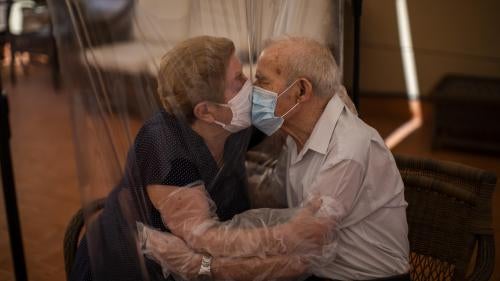 Spain was hit hard by the public health and economic challenges of the Covid-19 pandemic. The government took steps to shore up social security support as unemployment and poverty rose. Violence against women rose during a nationwide lockdown imposed to manage the pandemic. Conditions in reception facilities for migrants and in informal settlements housing migrant agricultural workers were unsanitary. Prosecutions continued of pro-independence Catalan actors. Courts limited musicians’ freedom of expression using overbroad criminal charges of glorifying terrorism and insulting the monarchy. In its October rule of law report, the European Commission flagged concerns about efficiency of the justice system and perceived lack of independence of the prosecutor general from the executive.

The World Health Organization estimated that 34,752 people had died from Covid-19 by October 28. Official national data showed excess deaths in people aged 65 and older as 18-24 percent higher than usual between March and October.

Organizations representing medical and care workers complained of ineffective, insufficient personal protective equipment in March and April, with many forced to rely on homemade masks and gowns during the early weeks of the pandemic. The Health Ministry confirmed that as of early June, 63 health workers had died from Covid-19.

The national government declared a state of emergency, with freedom of movement highly restricted during a lockdown across the country between March and June. Children across Spain were not allowed out of their homes at all for a six-week period between March 14 and April 26. Responding to increasing infection rates in late October, the national government declared a two-week state of emergency and sought parliamentary approval to impose a six-month state of emergency, ordering night curfews, and other measures at the discretion of regional authorities.

The economic closures amid the pandemic led to widespread job losses. The government provided support through a nationwide furlough scheme through January 2021.

From March through September, the government decreed that utility providers could not cut off services to people on low incomes.

In May, the government announced a Minimum Vital Income scheme (IMV), as a form of financial support to people living in “very high” or “extreme” poverty on less than €4,350 (US$5,105) per year. The system, expected to reach 850,000 households, was soon overwhelmed with applications and the government extended its deadline for retrospective claims. The UN special rapporteur on extreme poverty and human rights called on the government to increase coverage and eligibility.

In July, the former UN special rapporteur on extreme poverty criticized the general social protection system for inadequate support to the country’s poor, substandard housing conditions, and highlighted de facto segregation of Roma and migrant children in the education system.

In March, the Equality Ministry launched a plan to tackle gender-based violence during lockdown, including reinforcing staffing for telephone hotlines and setting up a new instant alert system to report domestic violence. Judicial authorities kept courts open to hear cases relating to domestic violence and child abuse during lockdown. Calls to the national gender-based violence helpline increased dramatically, with requests for assistance during April up 61.1 percent compared to the same period the previous year.

According to the UN refugee agency UNHCR, by mid-October at least 20,499 people had arrived irregularly by sea to Spain’s mainland, islands, and Ceuta and Melilla, the country’s enclaves in Morocco, while 1,399 people entered the enclaves by land. As of August, at least 440 people had died or gone missing in the Western Mediterranean and the Atlantic Ocean en route to Spain. One man died scaling the Melilla border fence in August.

Asylum claims dropped by 13 percent during the year and fell to almost zero during the state of emergency during which all asylum interviews were canceled.

Between March and May, the Interior Ministry released all people detained in closed immigration detention centers on the Spanish mainland as border closures made deportations impossible. In September, the government announced it had reopened detention centers.

Overcrowding was a serious problem in the reception center in Melilla and a temporary shelter set up in the local bullring. Judges twice rejected attempts by authorities to put the open center under lockdown after Covid-19 cases were reported. UNHCR, the Council of Europe’s Human Rights Commissioner, and NGOs urged authorities to find alternative accommodation and to transfer people to mainland Spain.

Spain failed to ensure adequate reception conditions or access to information on asylum amid a rapid increase in arrivals by sea to the Canary Islands starting in September. The autonomous community’s chief prosecutor ordered authorities in November to stop separating children from their parents pending DNA verification.

In a ruling that threatened to weaken protection against refoulement, the Grand Chamber of the European Court of Human Rights ruled in February that the 2014 summary deportation of two sub-Saharan African men from Spain to Morocco did not violate their rights, because their action in scaling the Melilla border fence with other migrants had been unlawful.

The UN Committee on the Rights of the Child announced in October that Spain had violated the rights of unaccompanied migrant and asylum-seeking children in all 14 cases brought before it since 2019. The children, most of whom arrived by boat, did not receive age-appropriate protection and care as a result of a flawed age determination process and a lack of safeguards to ensure the best interests of the child.

Migrant agricultural workers, many from North and sub-Saharan Africa, continued to experience unsanitary living conditions and labor exploitation. In March, the government temporarily extended the validity of migrant workers’ permits set to expire during the state of emergency to ensure harvesting was not affected. In May, the government announced a two-year agricultural work permit scheme for 18-21-year-old foreign nationals with regular status in Spain.

Nongovernmental organizations (NGOs) and associations representing ethnic minorities documented what they considered to be a pattern of increased racism and discrimination against people of Chinese, African, Arab and gitano (Roma) origin during the state of emergency. People of Chinese, or perceived to be of Chinese, origin were victims of hate crimes. Police were accused of relying on ethnic profiling when carrying out identity document checks during lockdown and using heavy-handed tactics in neighborhoods with a high-proportion gitano population.

In October, the Council of Europe’s Advisory Committee on the Framework Convention for Protection of National Minorities called on Spain to tackle anti-Roma prejudice and amend the criminal code to include “anti-Gypsyism” as an aggravating circumstance in hate crime.

In September, the UN Committee on the Rights of Persons with Disabilities found that Spain had violated the right to inclusive education of a child with Down syndrome whom authorities sent to a special education center rather than provide reasonable accommodations to enable his inclusion in a mainstream school. The committee urged Spain to end educational segregation of children with disabilities, and not prosecute parents who claimed their children’s right to inclusive education.

During the year advocates for the rights of children, people with disabilities and the gitano community launched a legislative campaign to end segregation in education and to create a domestic right to inclusive education.

On March 31, the government announced six months of temporary mortgage and rent relief measures, and a halt on evictions of people it defined as “economically vulnerable.” The government also approved temporary measures to provide increased housing support to victims of gender-based violence and homeless people during the state of emergency. Evictions resumed in June, with housing rights activists calling for an extension of the evictions ban through 2021. In September, the government ordered a further four-month extension of rent relief and allowed tenants with documented “economic vulnerability” who faced evictions to seek postponement until January.

In February, the UN Committee on the Elimination of Discrimination against Women ruled that repeated invasive procedures, which a woman experienced without informed consent during pregnancy and childbirth in 2009, had violated her rights. The committee found that domestic courts had failed to take into account fully the evidence provided by the woman and subjected her to gender stereotypes and discrimination. In addition to reparations to the woman for physical and psychological damage, the committee recommended Spain provide more training about reproductive health and other rights to health workers and judicial and law enforcement personnel, and ensure access to justice in cases of obstetric violence.

In September, the Supreme Court upheld Catalonia President Quim Torra’s 2019 conviction for disobedience for displaying a placard supporting imprisoned pro-independence activists on his office balcony during a pre-election period.

Judicial authorities continued to prosecute musicians on overbroad offenses of glorifying of terrorism and lèse-majesté (injury to the crown), for lyrics or tweets that appeared to support banned armed groups or that criticized the monarchy.

In June, the Supreme Court sentenced rapper Pablo Hasel to nine months in prison after convicting him of glorification and insulting the king. That month, the Supreme Court also upheld an earlier High Court conviction and 6-month prison sentence of 12 members of the hip hop group La Insurgencia for glorifying terrorism. Spain continued to seek the extradition from Belgium of the rapper Valtònyc, convicted in 2018 of glorifying terrorism, lèse-majesté, and threats to a regional politician.

However, in February, the Constitutional Court overturned a 2017 Supreme Court conviction of musician César Strawberry for glorification and humiliating victims of terrorism in tweets he posted in 2013 and 2014, finding that the ruling violated his right to free expression.

In October, the trial began of a demonstrator for hate crimes and offending Catholic religious sentiment after carrying a giant plastic vulva through Seville’s streets to mark International Women’s Day in 2013.

In October, the European Court of Human Rights ruled that Spain had violated the free assembly rights of a woman left “permanently incapacitated” after being hit with a police truncheon during a peaceful 2014 anti-austerity protest in Valladolid.