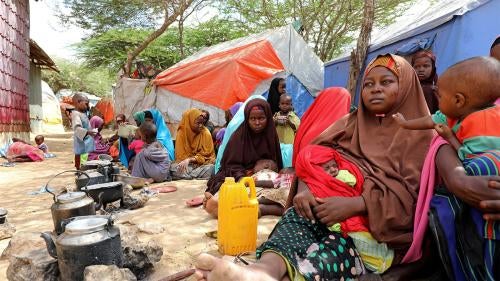 Somalia’s federal government received international praise for its planned economic reforms, including its national development plan, but it made little progress with security and judicial reforms while conflict-related abuses, insecurity, and the humanitarian crisis took a heavy toll on civilians.

All parties to the conflict committed violations of international humanitarian law, some amounting to war crimes. The militant group Al-Shabab conducted indiscriminate and targeted attacks on civilians and forcibly recruited children. Inter-clan and intra-security force violence killed, injured and displaced civilians, as did sporadic military operations against Al-Shabab by Somali government forces, African Union Mission in Somalia (AMISOM) troops, and other foreign forces.

Severe weather, locust infestations, and Covid-19 worsened the humanitarian crisis, with over 620,000 new displacements due to flooding, adding to the country’s 2.6 million internally displaced.

Somali authorities restricted media freedoms and the federal and Somaliland parliaments considered problematic sexual offenses bills. The Somali government did not hand over Al-Shabab cases from military to civilian courts. Authorities throughout the country carried out executions, many following military court proceedings that violated international fair trial standards. The government did not establish a National Human Rights Commission, nor did it move forward with the planned review of the outdated criminal code, pending since the previous administration.

Relations between the federal government and member states deteriorated, leading to a stalemate over federal election modalities, and fighting on occasion caused civilian casualties, notably in the Gedo region. An agreement was reached in September on the electoral framework paving the way for another restricted electoral process in late 2020 and early 2021.

The United Nations Assistance Mission in Somalia (UNSOM) recorded at least 596 civilian casualties, including 296 killings, by early August. The majority were due to Al-Shabab targeted and indiscriminate attacks using improvised explosive devices (IEDs), suicide bombings, and shelling, as well as targeted assassinations. Al-Shabab continued to execute after unfair trials individuals it accused of working or spying for the government and foreign forces.

In the first quarter, the UN recorded an increase in civilian casualties due to clan conflict, including revenge killings. In April, civilians were killed, and thousands displaced during inter-clan clashes in Wanlaweyn, with media reporting that a man was burned to death.

On January 28, 2020, Jubaland’s security minister, Abdirashid Hassan Abdinur “Janan,” implicated in serious crimes in the Gedo region, escaped detention in Mogadishu. In March, forces loyal to Abdirashid Janan fought with federal government forces in Gedo. According to the UN, the clashes killed five civilians and displaced 56,000. The presence of federal forces in Gedo continued to create tensions between the government in Mogadishu and Kismayo.

The US increased its military activity; in the first three months of 2020, it conducted twice as many airstrikes as in the same period of 2019. Some US actions killed and injured civilians. A February 2 strike in Jilib town, Middle Juba, killed a young woman and injured her two sisters, both children, and her grandmother. A March 10 attack on a minibus near the town of Janaale, Lower Shabelle, killed five men and a child.

On May 27, five masked gunmen, four in government uniforms, abducted seven health workers and a pharmacist, in the village of Gololey in Balcad District. Their bodies were found bullet ridden. At time of writing, the outcomes of federal and regional investigations were unknown.

The UN documented over 100 cases of conflict-related sexual violence, mostly against girls. The UN Security Council Panel of Experts on Somalia found that on April 6 two Somali National Army officers raped a woman and a girl during the takeover of Janaale town.

In August, the speaker of parliament in Mogadishu tabled a new Sexual Intercourse Related Crimes Bill that violates Somalia’s international and regional human rights obligations. The bill would allow for child marriage by defining a child around physical maturity instead of age, reduce penalties for forced marriage, exclude a broad range of sexual offenses, and include weak procedural protections for survivors. The current status of the bill is unclear.

The Somali criminal code classifies sexual violence as an “offense against modesty and sexual honor” rather than a violation of bodily integrity; it also punishes same-sex relations.

All Somali parties to the conflict committed serious abuses against children, including killings, maiming, the recruitment and use of child soldiers, and attacks on schools.

Al-Shabab continued its aggressive child recruitment campaign with retaliation against communities, refusing to hand over children. National and regional forces recruited and used children, according to the UN.

On February 16, journalist Abdiwali Ali Hassan was shot dead by unknown attackers in the town of Afgooye. Media groups reported that he had received journalism-related threats. While Somali authorities seldom investigate attacks on journalists, in September, the attorney general established a special prosecutor to investigate crimes against journalists.

On May 3, Somalia’s president, Mohamed Abdullahi Mohamed “Farmajo,” committed to reforming criminal code provisions that restrict media freedoms and to ending the use of criminal law against journalists. Mid-year, he signed into law a new media law, which while providing for key rights of free expression, contains overly broad content restrictions.

On March 7, National Intelligence and Security Agency (NISA) officials in Mogadishu arrested journalist Mohamed Abdiwahab Nur “Abuja” and held him incommunicado for three months. On August 5, the military court acquitted him of alleged charges of Al-Shabab membership and murder and ordered his release.

On July 29, the Benadir regional court sentenced Abdiaziz Ahmed Gurbiye, the chief editor of Goobjoog Media Group, to six months’ imprisonment and a fine on baseless charges of having insulted a government body and for publishing “fake news” related to the government’s Covid-19 response. His prison sentence was commuted.

A combination of Covid-19 and natural events, increasing in intensity and frequency by climate change, such as flooding and desert locust swarms, exacerbated communities’ existing vulnerabilities.

Between March 16, when the first Covid-19 case was confirmed, and November 20, there were 3,890 reported cases and 99 deaths; at least 133 health workers were infected. Flooding contributed to an uptake in acute watery diarrhoea and cholera and a deterioration in food insecurity. As of September, 3.8 million people faced acute food insecurity.

The United Nations and Norwegian Refugee Council (NRC) reported 1,092,000 people had been displaced as of late November, mainly due to flooding and conflict. The displaced communities faced sexual violence, cycles of forced evictions, dire living conditions and limited access to basic services. Restrictions imposed by the government to limit the spread of the pandemic, including restrictions on movement and measures to ease congestion, along with price hikes and reduced remittance flows, further limited access to livelihoods and health care for displaced communities.

Authorities in Baidoa announced a moratorium on forced evictions in order to mitigate the impact of Covid-19. As of September, 65,677 displaced were evicted in Mogadishu alone, two thirds of the total number recorded in the country.

Humanitarian agencies face serious access challenges due to insecurity, targeted attacks on aid workers, generalized violence, and restrictions imposed by parties to the conflict. Al-Shabab imposed blockades on a number of government-controlled towns and occasionally attacked civilians who broke them. According to the UN, between January and August, 11 humanitarian workers were killed.

The Somaliland government severely restricted reporting and free expression of journalists and perceived critics on issues deemed controversial or overly critical of the authorities. In January, Somaliland executed six prisoners.

In late August, Somaliland’s lower house approved the Rape and Fornication Bill, which allows for child and forced marriage, criminalizes witchcraft and “false” reporting of rape, provides for the death penalty for same-sex sexual relations, and includes an unacceptable definition of rape that excludes the possibility of rape within marriage and does not take into account consent. At time of writing, the bill was pending for upper house review.

International support focused on building Somalia’s security sector, improving relations between federal and state authorities including the stalemate around the electoral process.

US military strikes increased in the first five months of the year. In April, the US military command in Africa (AFRICOM) released its first quarterly report on civilian casualty assessments, acknowledging killing two civilians and injuring three in February 2019. In July, it acknowledged that the February 2 Jilib strike (see above) had killed and injured civilians. It established an online reporting portal, but many Somalis do not have access to the internet to use it. In June, AFRICOM stated that it had not paid any compensation in Somalia for civilian casualties it had acknowledged since 2017.

In March, the International Monetary Fund and World Bank declared Somalia eligible for debt relief under the Heavily Indebted Poor Countries Initiative, after Somalia cleared its arrears with international support.

Competition among Gulf states over political and economic dominance in Somalia continued to exacerbate intra-Somalia tensions.