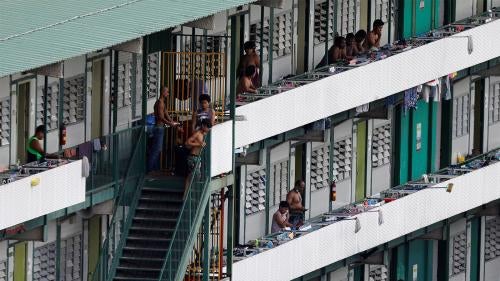 Singapore held elections in July, with the ruling People’s Action Party taking 83 out of 93 seats, with 61.2 percent of the popular vote. The opposition Workers’ Party won 10 seats—a record high for the opposition. The government continued to use harsh and overly broad laws restricting speech and assembly to prosecute critical speech, or to label it as “fake news,” and order social media platforms to block content. The city-state’s initial success in controlling the spread of Covid-19 was undermined by a failure to ensure that migrant workers could adequately protect themselves from the disease, leading to a surge in cases among migrants living in cramped workers’ dormitories.

Violation of Freedoms of Peaceful Assembly and Expression

The Protection from Online Falsehoods and Manipulation Act (POFMA), which came into effect in October 2019, allows a minister to declare that online content is “false” and order a “correction notice” to be placed on the relevant social media pages. Failure to comply with a correction order can be punished with the shutdown of social media pages in Singapore, up to 12 months in prison, and a S$20,000 (US$14,670) fine. While those receiving a correction notice can appeal to the minister and then to the Singapore High Court, one High Court judge has ruled that the burden is on the appellant to prove that the statement is true, while another high court judge has ruled that the burden of proof falls on the government, as international law requires.

As of July 1, 2020, the government invoked POFMA more than 50 times, primarily against content critical of the government or its policies. Correction notices were issued to independent online media, such as The Online Citizen and New Naratif, opposition politicians, and activists. Ministers issued several correction notices to opposition politicians or political parties during the nine-day election campaign in July.

In January 2020, the minister for home affairs issued a correction notice to the Malaysian non-governmental group Lawyers for Liberty (LFL), asserting that its press statement outlining execution methods in Singapore was false. LFL declined to comply with the order, and on January 23, the Singapore authorities ordered the NGO’s website blocked in Singapore.

Singapore’s Administration of Justice (Protection) Act contains overly broad and vague powers to punish for contempt, with penalties of three years in prison or a fine of S$50,000 (US$36,658). In March, the Court of Appeal upheld the conviction of activist Jolovan Wham under that law for stating on Facebook that “Malaysia’s judges are more independent than Singapore’s for cases with political implications.”

The court also upheld the conviction of John Tan, vice-chairman of the opposition Singapore Democratic Party, for posting on social media that Wham’s prosecution “only confirms that what [Wham] said is true.” Wham chose to serve seven days in jail in lieu of paying a fine of S$5,000 (US$3,666).

On July 28, Prime Minister Lee Hsien Loong’s nephew, Li Shengwu, was found guilty of contempt and fined S$15,000 (US$10,997) for a 2017 private Facebook post in which he said the Singapore government is “very litigious and has a pliant court system.”

Authorities also commenced investigations of lawyer M. Ravi, Terry Xu, editor of The Online Citizen, and two others for contempt of court following the publication of articles on The Online Citizen’s website related to M. Ravi’s client, Mohan Rajangam, a Singaporean who challenged the legality of his extradition from Malaysia in 2015.

During the nine-day election campaign period, the police announced the opening of an investigation into the Workers’ Party candidate, Raeesah Khan, under section 298A of the criminal code, which criminalizes speech “promoting enmity” between different groups. The investigation centered on posts from February 2018 and May 2020 questioning whether law enforcement authorities treated all groups equally.

The government maintains strict restrictions on the right to peaceful assembly through the Public Order Act, requiring a police permit for any “cause-related” assembly if it is held in a public place, or in a private venue if members of the general public are invited. The definition of what is treated as an assembly is extremely broad and those who fail to obtain the required permits face criminal charges. On August 20, 2020, the Court of Appeal upheld the constitutionality of the Public Order Act’s licensing requirement for a permit to hold public assemblies in a challenge filed by activist Jolovan Wham.

After his constitutional challenge was rejected, Wham chose to serve 10 days in jail in lieu of paying a fine for “organizing a public assembly without a permit.” He was convicted of permitting Hong Kong activist Joshua Wong to call in from abroad at an indoor event without obtaining a permit for a foreigner to speak. Wham is also facing charges under the Public Order Act for holding a vigil outside Changi Prison in July 2019 for a death row inmate, and for co-organizing a silent protest on the Singapore subway to commemorate the 30th anniversary of the arrest and detention of 22 activists and volunteers under the Internal Security Act 1987.

Even solo protests are treated as assemblies under the Public Order Act. In November, Wham was charged with holding an unlawful assembly for holding up a cardboard sign with only a smiley face on it near a police station. In April, the police investigated two students who held solo “climate protests” without seeking police permission. In each case, the student simply posed for a photograph holding a sign as part of the global “Fridays for Future” movement, and posted the images on social media.

Singapore retains the death penalty, which is mandated for many drug offenses and certain other crimes. However, under provisions introduced in 2012, judges have some discretion to bypass the mandatory penalty and sentence low-level offenders to life in prison and caning. There is little transparency on the timing of executions, which often take place with short notice. After a halt in executions due to Covid-19, in September 2020 authorities began notifying death row inmates of scheduled execution dates.

Lawyers representing defendants in death penalty cases often face government harassment. On August 13, 2020, the Court of Appeal opined that a statement made by the Attorney-General’s Chambers against a lawyer representing two Malaysian inmates on death row could have been “reasonably construed as intimidating.” In September 2020, the Court of Appeal reversed its earlier decision and acquitted a Nigerian man of drug trafficking five years after it overturned a lower court acquittal and sentenced him to death.

Use of corporal punishment is common in Singapore. For medically fit males ages 16 to 50, caning is mandatory as an additional punishment for a range of crimes, including drug trafficking, violent crimes (such as armed robbery), and even some immigration offenses. The caning, which constitutes torture under international law, is alleged to leave some of those caned with permanent injuries.

The rights of lesbian, gay, bisexual, and transgender (LGBT) people in Singapore are severely restricted. On March 30, 2020, the High Court rejected three constitutional challenges to criminal code section 377A, which makes sexual relations between two male persons a criminal offense. There are no legal protections against discrimination on the basis of sexual orientation or gender identity. Singapore law precludes LGBT groups from registering and operating legally.

In September 2020, an Indonesian maid was acquitted of stealing from the family of the Changi Airport Group chairman, four years after her employment was terminated and the family brought charges against her, with the court finding that the employer acted with the improper motive of preventing her from filing a complaint with the Ministry of Manpower.

Work permits of migrant workers in Singapore are tied to a particular employer, leaving them extremely vulnerable to exploitation. Foreign domestic workers, which are covered by the Employment of Foreign Manpower Act rather than the Employment Act, are effectively excluded from many key labor protections, such as limits on daily work hours and mandatory days off. Labor laws also discriminate against foreign workers by barring them from organizing and registering a union or serving as union leaders without explicit government permission.

Many migrant workers in Singapore are housed in crowded and unsanitary dormitories, with up to 20 people sharing a room, and communal bathrooms, in conditions that increased the risk of spreading Covid-19. While Singapore had initial success in controlling Covid-19 infections in the country, a surge of cases among migrant workers in early April led the government to put all dormitories on lockdown, restricting the movements of almost 300,000 foreign workers. While some “essential” workers were moved, the bulk of the migrants were confined to hot, overcrowded rooms with little ventilation, leaving them at risk of infection. As of August 13, 52,516 dormitory residents had tested positive for the coronavirus, making up more than 90 percent of all reported cases in Singapore.

Singapore had initial success, using aggressive contact tracing, in controlling Covid-19 infections. However, in early April a surge of cases among migrant workers, most of whom live in crowded dormitories provided by their employers and commute to work on crowded buses, led the government to put all dormitories on lockdown, restricting the movements of almost 300,000 foreign workers. While some “essential” workers were moved, the bulk of the migrants were confined to hot, overcrowded rooms with little ventilation, leaving them at risk of infection.

As of August 13, 52,516 dormitory residents had tested positive for the coronavirus, making up more than 90 percent of all cases in Singapore. After authorities ordered schools closed in early April, the Ministry of Education loaned laptops to more than 12,000 students who did not have the electronic devices needed for home-based learning. Schools reopened in early June.

Singapore is a regional hub for international business and maintains good political and economic relations with both the United States, which considers it a key security ally, and China. Most governments focused their priorities on trade and business, and did not publicly criticize Singapore’s poor human rights record.