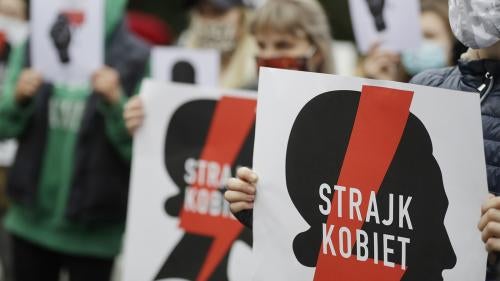 Presidential elections scheduled for March were postponed to July due to concerns over unfair campaigning as a result of movement restrictions due to the Covid-19 pandemic. Initial proposals by the ruling party to hold the elections in May via a hastily created mail-in voting system or to extend the incumbent president’s term by two years raised concerns about free and fair elections. Observers from regional organizations concluded that the campaign was marred by cases of misuse of state resources, xenophobic, homophobic, and antisemitic rhetoric, and reporting by state-owned and pro-government media in favor of sitting president Andrzej Duda, a close ally of the ruling Law and Justice party. Duda won by a slim margin.

The conservative nationalist government continued to strengthen its grasp on the judiciary and to smear journalists critical of the ruling party. Attacks and harassment against lesbian, gay, bisexual, and transgender (LGBT) people increased, and several LGBT activists were arrested during the year and faced spurious charges.

Independence of the Judiciary

The government continued its attacks on members of the judiciary. Judges and prosecutors are subject to arbitrary disciplinary proceedings for standing up for the rule of law and speaking up against problematic judicial reforms—an interference with their judicial independence.

In January, parliament adopted a law that could allow the firing of judges who carry out court rulings counter to the government’s policies.

A Disciplinary Office, established in September 2018, by late June had brought 152 disciplinary proceedings against judges, of which 16 were pending before courts at time of writing. In October, the Disciplinary Chamber revoked the immunity of judge Beata Morawiec, suspended her from her official duties and halved her salary for alleged bribery. The judge, who denied all allegations and who is the head of a national judges’ association, is known for being critical of the government’s legal reforms and for defending the independence of the judiciary. In April, the Court of Justice of the European Union (CJEU) in an interim decision ordered the suspension of a 2017 law establishing the new disciplinary regime. A final judgment was due in the second half of 2020.

In its October Rule of Law report, the EU Commission raised concerns that the increasing influence of the executive over the justice system has put judicial independence at risk. It also flagged that civil society and other stakeholders were rarely consulted in the law-making process, instead subject to hostile statements by high-ranking ruling party officials.

In August, over 1,200 judges were under investigation for having signed a letter addressed to the Organisation for Security and Cooperation in Europe (OSCE) asking it to monitor the presidential elections in Poland.

In February, the Council of Europe Parliamentary Assembly voted to bring Poland under its monitoring mechanism, the first time in two decades that such steps have been taken against an EU member state. In August, a Dutch court suspended all extraditions to Poland due to concerns over lack of judicial independence, requesting the CJEU for guidance on the matter.

In January, the Council of Europe’s Commissioner for Human Rights urged the Senate, the upper house in Poland’s parliament, to reject the controversial bill curtailing the independence of judges and prosecutors and their freedom of expression.

Adam Bodnar’s five-year term as Poland’s commissioner for human rights ended in September. Bodnar was a frequent critic of the government’s rule of law abuses and attacks on the LGBT community and women’s rights and was often targeted due to his work. At time of writing, a battle between civil society and ruling party members for Bodnar’s successor was underway. The Council of Europe’s Venice Commission, Europe’s top constitutional law expert body, in October expressed concerns about the “risk of paralysis” of the ombudsman’s institution.

The government strengthened control over the press and continued its smear attacks on media outlets and journalists critical of the government and ruling party. In the lead up to June elections, Reporters Without Borders reported that the public service broadcaster in 97 percent of cases, portrayed President Duda in a positive light, while the opposition candidate in 87 percent of cases was portrayed in a negative light. In July, President Duda accused a German-owned broadcaster of interfering in the Polish elections due to an article criticizing the president for pardoning a convicted child abuser.

The government ramped up its attacks on women’s and LGBT rights, part of the government’s increasing hostile rhetoric against what it refers to as “gender ideology.”

In August, on the basis of an overly broad blasphemy law, police arrested several LGBT activists for placing rainbow flags on prominent public monuments. Polish police confirmed that they were investigating three activists for “insulting religious feelings and insulting Warsaw monuments.” One activist, who was also arrested for defacing a truck carrying anti-LGBT slogans in June, spent three weeks in pretrial detention before being released following international pressure. The Council of Europe Commissioner for Human Rights, Council of Europe SOGI (Sexual Orientation and Gender Identity) Unit, and the European Parliament LGBTI Intergroup called on Polish authorities to release the activist immediately. Charges against the activist were pending at time of writing.

Elżbieta Podleśna, LGBT activist and artist, was arrested in May 2019 for possessing posters depicting the Virgin Mary with a rainbow halo, and faced criminal charges for “insulting religious feelings.”

During his election campaign in early 2020, President Duda frequently made homophobic statements. In June, he stated that LGBT rights were an “ideology” more dangerous than communism and signed a “Family Charter” pledging to “defend children from LGBT ideology.” In July, Duda stated that he would submit a bill for a constitutional amendment prohibiting the adoption of children by same-sex couples.

Authorities in one-third of Poland’s cities have identified their localities as “LGBT Ideology Free Zones” although courts attempted in 2019 to curtail the anti-rights campaign. On August 6, an administrative court in Lublin annulled the anti-LGBT resolution of the Serniki Commune. In July, the European Commission announced that it would withhold development funding for six Polish municipalities in reaction to their insistence of retaining the label of an “LGBT-Free Zone.” In March 2020, Polish authorities indicated they were planning to sue a group of LGBT rights activists who had created an “Atlas of Hate,” which mapped anti-LGBT provisions that had been instituted across the country.

In a September statement, the UN human rights commissioner expressed her concerns about the continuing repression of LGBT people and activists.

The European Court of Human Rights in July ruled that Poland had unlawfully refused entry to asylum seekers at the Poland-Belarus border. In March, Poland closed its border with Belarus in response to the Covid-19 pandemic, effectively making it impossible for people to access Polish territory to seek asylum.

In July, the Minister of Justice declared that Poland would withdraw from the Council of Europe Convention on Preventing and Combating Violence against Women and Domestic Violence, claiming the Convention is “harmful” as it requires educators to teach children about gender. Earlier in the year, service providers reported that calls from domestic violence victims increased dramatically during the Covid-19 pandemic lockdown but that the government did not take measures to support prevention or ensure availability of services and appropriate police response.

Two controversial bills, “Stop Pedophilia, ” which would criminalize activities, educators and organizations providing sexuality education to children or information on sexual and reproductive health and rights, and “Stop Abortion,” which would eliminate legal access to abortion in cases of severe or fatal fetal anomaly—further limiting what is already one of Europe’s most restrictive abortion laws—were debated in parliament in April and subsequently sent to a committee for “further work.” Both remained pending before parliament at time of writing. The bills sparked large street protests.

The Constitutional Tribunal, criticized for its lack of independence and legitimacy, ruled in October that access to abortion on the ground of “severe and irreversible fetal defect or incurable illness that threatens the fetus’ life” was unconstitutional, making it virtually impossible for women to access legal abortion in Poland. The ruling triggered nationwide protests.

In February, in a submission to the Council of Europe Committee of Ministers responsible for monitoring implementation of European Court of Human Rights judgments, the Council of Europe’s commissioner for human rights called on Poland to ensure women’s access to lawful abortion.