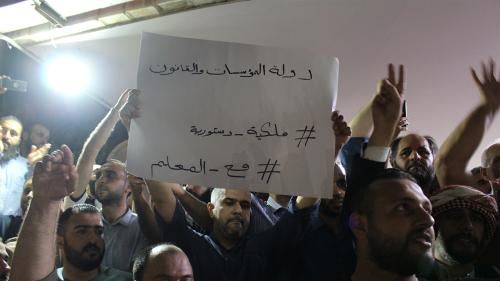 In March 2020, Jordan declared a state of emergency in response to the Covid-19 pandemic, granting the prime minister sweeping powers to rule by decree and curtail basic rights. Prime Minister Omar Razzaz pledged to carry it out to the “narrowest extent,” but authorities later exploited the emergency measures to arbitrarily curtail fundamental rights, including freedom of speech and assembly.

In one such incident in late July, police raided the Teachers Syndicate headquarters in Amman and 11 of its branches across the country, shuttered them, and arrested all 13 syndicate board members on dubious legal grounds. Following the closure, authorities prevented or forcibly dispersed demonstrations across the country protesting the closure and arrested protesters and journalists covering the event.

On August 26, police arrested Emad Hajjaj, 53, a prominent Jordanian cartoonist whose satirical cartoons have appeared in major Jordanian dailies for decades. The arrest stemmed from a cartoon he posted to his website and social media depicting a dove with an Israeli flag spitting in the face of the United Arab Emirates’ de facto ruler, Mohammed bin Zayed. The cartoon referenced reports that the Israeli government had urged the United States not to sell F-35 warplanes to the UAE despite its agreement to normalize diplomatic relations with Israel. Authorities released Hajjaj on August 30 after State Security Court prosecutors declined to prosecute him on the charge of “disturbing [Jordan’s] relations with a foreign state,” an offense under Jordan’s overly broad counterterrorism law.

In April, the government issued an emergency decree that criminalized sharing news that would “cause panic” about the pandemic in the media or online with a penalty of up to three years in prison. Between March and May, police detained two prominent media executives, a foreign journalist and a former member of parliament, apparently in response to their public criticism of Covid-19 policies, as well as three people for allegedly spreading “fake news.” Among those arrested were the news director and general manager of Roya TV, a popular local media outlet. Authorities released them on April 12 but their case status was unclear at time of writing. Activists and commentators suggested that the arrests stemmed from a widely circulated Roya TV video where Jordanian day laborers expressed Covid-19 concerns.

Jordanian authorities further curtailed press freedom in 2020 by issuing arbitrary press gag orders prohibiting reporting on important local developments, including two bans in July. One prohibited publishing any news about the brutal killing of a woman by her father, and another prohibiting reporting on authorities’ arbitrary closure of the teachers’ syndicate and arrests of its leaders. Authorities arrested at least two journalists for their coverage of ongoing teachers’ protests, one of whom security forces beat prior to his arrest. These restrictions reflected a broader degradation of press freedom in recent years.

Following the closure of the teachers’ syndicate in late July, authorities banned all public protests stemming from the closure citing health and safety rules tied to the country’s state of emergency for the Covid-19 pandemic, which limits gatherings to a maximum of 20 people (though authorities did not enforce the limit with respect to places of worship and restaurants). Authorities prevented or forcibly dispersed protests in towns across the country in July and August and arrested numerous teachers and other protesters, holding some in detention. International human rights law allows authorities to limit public gatherings because of public health, but only when the restrictions are proportionate and on a case-by-case basis rather than a blanket ban.

In late December 2019, authorities announced changes to the country’s pre-approval process for local nongovernmental organizations (NGOs) operating in Jordan to receive funding from foreign sources. Local NGO leaders complained that the pre-approval process remained onerous and lacked transparency. The changes did not generally apply to international NGOs operating in Jordan.

Under the Public Gatherings Law amended in March 2011, Jordan did not require government permission to hold public meetings or demonstrations, but organizations and venues continued to seek permission from the Interior Ministry or General Intelligence Department. In December 2019, Human Rights Watch was forced to postpone a press conference in Amman after authorities did not approve the event, but following press reporting of the cancellation authorities quickly granted permission for the event.

By late 2020, over 660,000 people from Syria had sought refuge in Jordan, according to the UN High Commissioner for Refugees (UNHCR). Over 85 percent of Syrians lived outside refugee camps in rented accommodation. Jordan continued its years-long policy of not permitting Syrians to enter the country to seek asylum.

According to the UNHCR, Jordan also hosted asylum seekers and refugees from other countries in 2020, including 66,800 Iraqis, 14,600 Yemenis, 6,100 Sudanese, 749 Somalis, and 1,600 from other countries. Authorities continued to enforce a January 2019 decision banning the UNHCR from registering as asylum seekers individuals who officially entered the country for the purposes of medical treatment, study, tourism, or work, effectively barring recognition of non-Syrians as refugees and leaving many without UNHCR documentation or access to services.

Authorities continued to implement the Jordan Compact, the 2016 agreement between the Jordanian government and donor countries, which aimed to improve the livelihoods of Syrian refugees by granting new legal work opportunities and improving the education sector. By the end of 2019, labor authorities had issued or renewed at least 176,920 work permits for Syrians since 2016, although many of these were renewals. Most professions remained closed to non-Jordanians, and many Syrians continued to work in the informal sector without labor protections.

The 233,000 school-age Syrian refugees in Jordan face multiple obstacles to education that are most acute for children ages 12 and older, including poverty-driven child labor and child marriage, lack of affordable school transportation, government policies that limit access to education, and lack of inclusive education and accommodation for children with disabilities.

Only a quarter of secondary-school-age Syrian refugee children in Jordan were enrolled in school. Non-Syrians refugees and asylum seekers were in many cases prevented from enrolling their children in school in 2020. The government used television and the internet to provide distance learning for students during Covid-related school closures. Around 70 percent of Jordanian children had internet access, but that figure dropped sharply for refugees and poorer and marginalized Jordanians, UNICEF reported. Even before the pandemic, only around a quarter of Syrian refugee students were able to continue their education as far as secondary school.

Authorities did not allow aid deliveries from Jordan to tens of thousands of Syrians at Rukban, an unofficial camp along Jordan’s border with Syria. Authorities deported Syrians to Rukban in 2020 without permitting them to challenge their deportations.

Jordan’s personal status code remains discriminatory, despite a 2010 amendment that widened women’s access to divorce and child custody. Women need the permission of a male guardian to marry, and marriages between Muslim women and non-Muslim men are not recognized. Women cannot travel abroad with their children, as men can, without the permission of their child’s father or male guardian or a judge. While women can travel outside the country without needing permission, authorities sometimes comply with requests from male guardians to bar their unmarried adult daughters, wives, and children from leaving the country. Authorities also arrest women reported as “absent” for fleeing their home by their male guardians under the Crime Prevention Law.

Article 9 of Jordan’s nationality law does not allow Jordanian women married to non-Jordanian spouses to pass on their nationality to their spouse and children. In 2014, authorities issued a cabinet decision purporting to ease restrictions on non-citizen children of Jordanian women’s access to key economic and social rights, but the easing fell short of expectations. Non-citizen children of Jordanian women no longer require work permits for employment, but many professions in Jordan remained closed to non-Jordanians.

In July, Jordanians circulated a video on social media outlets in which the screams of an unseen woman can be heard. The woman, identified as “Ahlam,” was apparently killed by a relative. Article 98 of Jordan’s penal code, amended in 2017, states that the “fit of fury” defense does not allow mitigated sentences for perpetrators of crimes “against women,” but judges continued to impose mitigated sentences under article 99 if family members of victims did not support prosecutions of their male family members.

As of November, authorities had not carried out any executions in 2020.

Local governors continued to use provisions of the Crime Prevention Law of 1954 to place individuals in administrative detention for up to one year, in circumvention of the Criminal Procedure Law.

In 2020, the US Congress appropriated US$1.65 billion in Foreign Military Financing, Economic Support, and other aid to Jordan. This exceeded the amount requested by the Trump administration and outlined in the 2018 Memorandum of Understanding between the United States and Jordan. The US did not publicly criticize human rights violations in Jordan in 2020 except within the State Department and other annual reports.

Jordan is a member of the Saudi/Emirati-led coalition fighting the Houthi forces in Yemen, which continues to commit violations of international human rights and humanitarian law in Yemen.