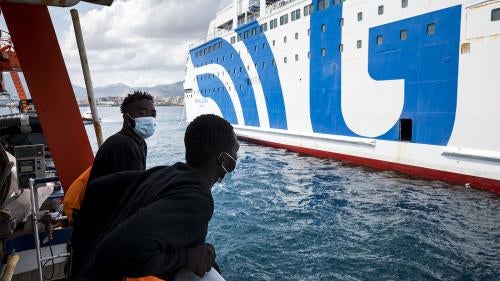 Italy was the first country outside China to experience a major outbreak of Covid-19 and to declare a national state of emergency, and impose a strict lockdown, in early March 2020. The coalition government in power since September 2019 reversed some of the most problematic migration and asylum policies implemented by the previous government but continued to obstruct nongovernmental rescue organizations. Hate crimes remained a serious problem. Women faced obstacles to exercising reproductive rights and an increase in violence during lockdown. In its October rule of law report, the European Commission flagged concerns about efficiency of justice, political independence of media, and smear campaigns against some civil society groups, particularly those working on migration.

At least 31,100 healthcare workers were infected—over 11 percent of all cases—and at least 240 died, with many blaming shortages of personal protective equipment at the height of the crisis in March-April. By the end of August, a voluntary app to assist with contact tracing had been downloaded by only 14 percent of potential users amid privacy concerns. The number of new cases began increasing steadily in early August, and in October the government imposed new nationwide restrictions on certain businesses and activities in response to surging infection rates.

Beginning in mid-March with a massive aid package, the national government adopted a series of measures to protect some workers from being fired, provide cash infusions for freelance workers and poor families, support families with young children by ensuring the right to parental leave and providing child care vouchers, and increase food distribution to the needy. The UN special rapporteur on the right to food recommended in March that Italy adopt a comprehensive framework law to implement the right to food to eliminate hunger and food insecurity.

The government closed schools and universities across the country on March 4 and imposed distance learning for the remainder of the school year, affecting over 8.5 million students. An estimated 12 percent of 6 to 17 year olds do not have a computer at home; to date, there is no public evaluation of the use of 150 million euros (US$175 million) allocated by the Ministry of Education for the purchase of computers and other devices to facilitate online learning or alleviate the impact of distance learning on children with disabilities.

Schools reopened in September amid concerns over health and safety, a shortage of support teachers for students with disabilities, and a patchwork of solutions to address lack of space to ensure social distancing; in late October, the government ordered at least 75 percent online teaching for all secondary schools.

Prisoners rioted in over 40 prisons across the country from March 7-10 to protest rules implemented in response to Covid-19 that limited activities, work leave permits, and contact with relatives, as well as chronic overcrowding that put them at higher risk of contracting the disease. Thirteen inmates died and 69 inmates and over 100 guards were injured during the protests.

The government adopted a plan in mid-March to move detainees with less than 18 months left to serve on their sentences to house arrest, and expand the use of semi-liberty regimes; by the end of July, the national rate of prison overcrowding was 106 percent, down from 119 percent. As of the end of August, there were 290 confirmed cases of Covid-19 in prisons.

Dozens of people were released from migration detention pending deportation given the impossibility of returns amid Covid-19-related border closures, with numbers in detention dropping from 425 in mid-March to 178 in late May. Deportations resumed in early August, and numbers of detainees had increased to around 300 at time of writing.

A study conducted by the National Institute for Health, Migration and Poverty found that by mid-June there were 239 confirmed cases of Covid-19 in reception centers for asylum seekers, the majority in centers known as CAS, originally set up as emergency options due to lack of space in the permanent shelter system. In July, 133 residents in a large reception center in former military barracks in Veneto tested positive for the virus.

The government adopted some positive measures to protect migrants and asylum seekers amid the pandemic, such as extending the right to stay in reception centers until the end of the public health emergency for people who would otherwise have had to leave, including children who turned 18, and extending the validity of expired documents given the impossibility of renewal during lockdown.

During the adoption of the outcomes of its Universal Periodic Review before the United Nations Human Rights Council in March, Italy rejected a number of recommendations on the rights of migrants and asylum seekers, including ensuring compliance with prohibition of refoulement and collective expulsions.

In February, the Memorandum of Understanding with Libya on migration cooperation was renewed for another three years despite overwhelming evidence of brutality against migrants and the complete absence of an asylum system in Libya; at the time of writing Libya had not yet agreed to cosmetic amendments, while Italy, in July, commissioned six patrol boats to be donated to Libya for interceptions at sea.

In October, the government reversed some of the worst policies adopted under the previous government, reinstating humanitarian residency permits, guaranteeing asylum seekers access to specialized shelters, and removing obstacles to their access to rights. The new decree reduces but does not eliminate fines on ships that perform search-and-rescue at sea.

After declaring, in April, Italian ports “unsafe” because of the Covid-19 pandemic, authorities allowed, often with unjustified delay, nongovernmental rescue organizations to disembark rescued people but began impounding ships on technical or administrative grounds. In September, the government grounded an airplane deployed by Sea Watch, a rescue group, to spot boats in distress in the Mediterranean, and impounded the rescue ship the organization operates with Médécins Sans Frontières. In mid-September, Italy allowed Mediterranea Saving Humans to disembark 25 people who had spent 38 days on an oil tanker as Malta (and Italy) refused to accept them.

The UN special rapporteur on the situation of human rights defenders called on Italy in early October to end the criminalization of humanitarian rescuers, highlighting the open cases against Carola Rackete, the captain of a Sea Watch ship, and 10 crew members of the Iuventa rescue ship.

Poor management of an increase in spontaneous arrivals led to severe overcrowding in the Lampedusa reception center. The government began in April to quarantine arriving migrants and asylum seekers on passenger ferries for 14 days; at time of writing 3 ferries were anchored off Lampedusa and Sicily, raising concerns about a normalization of offshore processing. In October, authorities began using at least one ship to isolate asylum seekers already accommodated in reception centers found to be positive for Covid-19.

According to government statistics, more than 25,900 people reached Italy by sea, including more than 3,190 unaccompanied children, by mid-October. According to the International Organization for Migration, 473 persons went dead or missing in the Central Mediterranean in the same period. Authorities reinforced border patrol guards at the land border with Slovenia citing increased arrivals, while rights organizations expressed concern over returns to Slovenia without procedural safeguards, leading to chain deportation to Croatia and then Bosnia.

Unaccompanied children who traveled on to France after spending a year or more in Italy, regularly told Human Rights Watch that lack of access to education and other poor reception conditions were factors in their decisions to leave.

A program to provide residency permits to undocumented migrants working in agriculture, domestic work, and home care was implemented in response to the Covid-19 but relied on employer participation. According to official statistics, 85 percent of the 207,542 applications received by the program’s deadline came from domestic and home care workers and only 15 percent from farmworkers. Some 13,000 people applied under a more restrictive channel created in the same program for people whose residency permit had expired after October 31, 2019, and could prove they had previously been employed in the same 3 sectors. However, this was a missed opportunity to extend the program and secure rights for an estimated 600,000 people living in Italy without status.

Five Eritreans rescued at sea by the Italian Navy in July 2009 and subsequently returned unlawfully to Libya arrived in Italy in August. In a landmark ruling in November 2019, a court had ordered the government to allow them and nine others to come to Italy to apply for asylum.

The trial of former Interior Minister leader Matteo Salvini began in October on charges of abduction, unlawful detention, and abuse of power for refusing to allow 131 rescued people to disembark for 4 days from an Italian military ship in July 2019.

The brutal beating to death in September of 21-year-old Willy Monteiro Duarte, a Black Italian, in a disadvantaged town on the outskirts of Rome, provoked a nationwide debate about racism, social degradation, and violence. At time of writing, four men were in pretrial detention on charges of voluntary homicide, with prosecutors saying they will not prosecute as a bias crime.

Some elected officials in southern regions stoked rather than calmed unfounded fears linking migrants with Covid-19, and anti-immigrant candidates in regional elections engaged in xenophobic rhetoric.

The Minister of Health announced in August new guidelines to allow medical abortion up to the ninth week of pregnancy. Previous rules allowed medical abortions only up to the seventh week and during a three-day hospitalization. The government did not ensure clear pathways to time-sensitive reproductive healthcare during the Covid-19 lockdown causing interruptions to abortion services and exacerbating long-standing barriers to people exercising the right to terminate a pregnancy during the legal timeframe of 90 days.

Calls and text messages to the national helpline for victims of domestic abuse more than doubled during lockdown, compared to March-June 2019. The government exempted women and children fleeing abuse from lockdown restrictions on movement and ordered local authorities to requisition vacant buildings to accommodate them if shelters were full.

A 20-year-old woman died in September when her brother rammed into the motorcycle she was riding on with her trans boyfriend. At time of writing, parliamentarians were examining a bill that would make incitement to violence or discrimination “based on sex, gender, sexual orientation or gender identity” a crime, and make such bias an aggravating factor in sentencing. The bill also increases funding for projects to prevent and counter violence based on sexual orientation and gender identity, as well as for victim support.