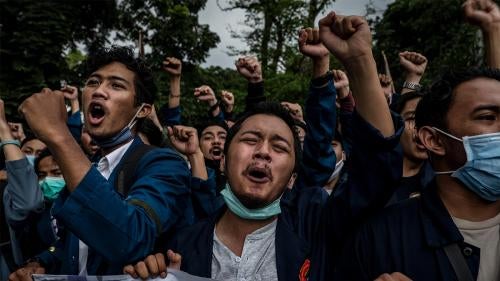 President Joko “Jokowi” Widodo announced the first Covid-19 cases in Indonesia on March 2, more than a month after China had imposed a lockdown in Wuhan. The virus has been devastating, killing 15,000 people, causing 2.6 million lost jobs, and an 3.49  percent decrease in GDP at time of writing.

The Jokowi government weakened Indonesia’s Corruption Eradication Commission, nominating a controversial police general to head the anti-corruption body and prompting more than 30 employees to resign between January and September. His governing  coalition passed a business-friendly bill in parliament that would dismantle environmental protections and labor rights.

In a victory for civil liberties, a draft criminal law was temporarily withdrawn in September 2019 after mass protests. The draft contained articles that would violate the rights of women, religious minorities, and lesbian, gay, bisexual, and transgender (LGBT) people, as well as restricting freedom of speech and association. The draft included a provision that would punish extramarital sex by up to one year in jail, effectively also criminalizing all same-sex conduct. But it is still on the list to be debated in parliament.

In a setback for justice and accountability, Defense Minister Prabowo Subianto, recruited by Jokowi to join his cabinet in 2019, appointed notorious senior military officers Dadang Hendrayudha and Yulius Selvanus to senior positions. Like Prabowo, the two were previously found guilty of kidnapping student activists in 1997-98.

LGBT rights continued to come under attack and became a worrisome rallying cry for social and political conservatives in many parts of the country.

Several provinces, including Jakarta, imposed lockdowns, but the government response was weak, with low testing and tracing rates and little transparency. With limited laboratories, Indonesia had tested 95,000 per week by August or around 36 percent of the World Health Organization’s standard: one test per 1,000 population per week, ranking lowest among countries with 100,000 cases or more.

Jokowi deployed military, police, and intelligence bodies to conduct public health activities, including raids to enforce compliance with mask mandates. Indonesia’s progress in reducing poverty over the last decade may be eliminated, with projections that the poverty rate will increase from 9.2 percent in September 2019 to 12.4 percent in September 2020.

In April, Minister of Law and Human Rights Yasonna Laoly instructed authorities to reduce the prison population by 50,000 and suspend prison visits. At the time, the prisons had almost 270,000 inmates, more than double their total official capacity

The government reacted to the pandemic by closing all public schools, 149,000 schools with over 60 million students, and moving to remote learning. This presented huge infrastructural and equity challenges, with the Internet Telecommunication Union estimating that only 48 percent of Indonesians use the internet. The Ministry of Education  broadcast school materials over national television, simplified the curriculum to focus on essential numeracy and literacy skills, allowed schools to spend their budget on items such as laptops and mobile phones, and subsidized mobile data for students to improve their access to remote learning.

Indonesian police arrested at least 38 individuals for blasphemy across 16 provinces in 2020. They included Doni Irawan, sentenced to three years for tearing a Quran inside a mosque in Deli Serdang. A Bogor court acquitted Suzethe Margareta, who has paranoid schizophrenia, for bringing her dog to a mosque. In August, Bandung police arrested Apollinaris Darmawan, a Catholic pensioner, who had written a book and posted a video on YouTube questioning the teachings of Islam.

The draft criminal code includes a provision expanding the blasphemy law from one to six articles to include offenses such as “persuading someone to be a non-believer.”

Indonesian Christians in predominantly Muslim provinces continued to have difficulties opening new churches or keeping existing churches open in the face of opposition from conservative Muslim groups. In January, the Saint Joseph Catholic Church in Tanjung Balai, Karimun Island, had its building permit revoked after a local Muslim group protested its renovation. On September 7, a district head in Jonggol, West Java, ordered Rev. Donfri Polli, a Christian Pentecostal pastor, to stop conducting Sunday service, stating that he had no permit to operate a church. On September 21, a village head in Mojokerto, East Java, stopped Sumarmi, a Christian woman, from renovating and organizing prayers in her house unless she agreed “not to put a cross in her house.”

In March, 15 Indonesians filed a lawsuit with the Supreme Court arguing that the government should stop shuttering thousands of houses of worship, mostly churches, under the discriminatory “religious harmony” regulation. In June, the Supreme Court rejected the petition, a decision that won praise from the Indonesian Ulama Council, the country’s Islamic semi-governmental group, which has facilitated discrimination against religious minorities.

On January 31, American editor Philip Jacobson of the environmental news site Mongabay was deported from Indonesia after spending 45 days in detention in Palangkaraya, Central Kalimantan, over an alleged visa violation.

In June, intelligence officials pressured Lampung University to stop a webinar on racism against ethnic Papuans but the Teknokra student news website resisted. Shortly before the webinar, an editor of the Teknokra received anonymous threatening WhatsApp messages, while another editor alleged that her Gojek account (a transport, payment, and food delivery app) had been hacked.

In August, four news media organizations, including those that ran the websites Tempo and Tirto, were subject to hacking and other digital attacks after publishing critical stories on Indonesian military involvement in pushing a Covid-19 vaccine.

In September police arrested three student journalists after they joined fishermen on their boat to protest sand mining on Kodingareng Island, off Makassar. In October, at least 56 journalists were beaten, threatened, and arbitrarily arrested in Malang, Jakarta, and Surabaya, when covering protests against the new job creation law.

Women’s rights groups, including the National Commission on Violence Against Women and Legal Aid Foundation of the Indonesian Women’s Association for Justice, reported domestic violence cases associated with pandemic-related lockdowns has doubled from the 2019 number. Women’s rights groups campaigned for the parliament to take action on two long-awaited pieces of legislation: a sexual violence prevention bill and a domestic worker protection bill. The Sexual Violence Prevention bill, first proposed in 2016, was removed from the priority list in July. The Domestic Worker Protection Bill, under deliberation for 16 years, remains stuck in parliament.

Indonesian authorities continued their assault on the basic rights of LGBT people. On August 29, police forcibly broke up a party at a hotel, arresting nine men and charging them with the crime of “facilitating obscene acts” under the pornography law, which discriminates against LGBT people. East Java police arrested a police officer in Probolinggo who allegedly had a relationship with another man. In October, the Supreme Court announced that it had rejected appeals and  dismissed at least 16 gay soldiers in several court cases including in Bandung, Jayapura, Medan, Semarang, and Surabaya.

Indonesian courts tried more than 70 Papuan activists in eight cities, including Jakarta, for participation in anti-racism rallies at which they unfurled the Papuan Morning Star flag. The courts found them guilty of “treason” and sentenced them maximum to 11 months in prison, the amount of time already served.

On July 18 in Papua soldiers shot and killed father and son Elias and Selu Karunggu in an apparent extrajudicial execution after they pulled the son aside for interrogation as the two were waiting for a boat. On July 24, Indonesian soldiers from Raider 516/Caraka Yudha battalion allegedly assaulted and killed Papuan teenager Oktovianus Betera after he got into a verbal dispute with a shop owner who claimed he was trying to shoplift.

Rev. Yeremia Zanambani of the Gospel Tabernacle Church of Indonesia was shot dead when feeding his pigs near his house in Hitadipa village, Intan Jaya district, Papua, on September 19. Hostilities were ongoing in the area between Indonesian soldiers and a Free West Papua group during which two soldiers and two non-Papuan Indonesians were killed.

No one was arrested for the killing of at least 52 Papuans and migrants from other parts of Indonesia in Deiyai and Wamena during 2019 anti-racism protests. The precise number of deaths is unknown because the government continued to limit access to Papua in 2020.

In April in Ambon police arrested 23 activists, who participated in flag-raising ceremonies commemorating the 70th anniversary of the declaration of independence of the Republic of South Moluccas (Republik Maluku Selatan, RMS). The Ambon court found three of them guilty, sentencing two to two years and a third to three years in prison.

In Ternate, Khairun University dismissed four students for taking part in a protest against racism in Papua. The students filed a lawsuit in Ambon but the administrative court rejected their petition in September.

Major Indonesian companies continued to cut old growth forests with impunity. Yet on May 19, a court sentenced Bongku of the Sakai Indigenous group in Riau to a year in jail for cutting down 20 trees in a forest  that his tribe has claimed in a longstanding dispute with the Asia Pulp & Paper Group.

On April 26, Hermanus, a Dayak Indigenous farmer, died in a Sampit hospital while still facing trial for defending his land against Best Agro oil palm plantation. The land dispute began in 2003. On June 15, his colleagues, James Watt and Dilik, were sentenced respectively to 10 and 8 months in jail for “stealing” oil palm fruits from land the National Land Agency had declared in 2011 belonged to the village.

On August 18, police raided the Pubabu Indigenous community on Timor Island, displacing more than 600 people and destroying 47 homes in  a long-lasting land dispute.

On August 26, the police arrested Effendi Buhing, the tribal chief of the Dayak Indigenous community in Kinipan forest, Central Kalimantan. Five of his colleagues had previously been detained for seizing chainsaws from the workers of PT Sawit Mandiri Lestari palm oil company in an attempt to stop them from clearing the forest.

Despite government efforts, people with psychosocial disabilities (mental health conditions) are shackled—chained or locked in confined spaces—for weeks, months, or even years. According to government data, approximately 15,000 people are still living in chains.

The Indonesian Health Ministry rolled out a community outreach program to collect data, raise awareness, and provide services, including mental health services. As of September 2020, the program had reached 48 million—roughly 70 percent—of Indonesian households. However, Covid-19 has posed an extreme threat to people with psychosocial disabilities who are shackled in homes or overcrowded institutions without proper access to sanitation, running water, soap, or even basic health care. Covid-19 has disrupted services putting people with psychosocial disabilities at risk of being shackled or locked up in institutions.

Indonesia, the largest country in Southeast Asia and a member of the Organisation of Islamic Cooperation, failed to press Myanmar on the atrocities against Rohingya Muslims or the nearly one million refugees in Bangladesh during the Association of Southeast Asian Nations (ASEAN) summit in Hanoi in July. Indonesia remained silent despite sympathetic public opinion and the continued arrival of Rohingya refugees to Sumatra.

Indonesia also was quiet on the plight of Uyghur and other Turkic Muslims in Xinjiang, China, instead inviting the Chinese Embassy to communicate directly with multiple Muslim groups in Indonesia.

In October, US Secretary of State Mike Pompeo visited Jakarta, urging Indonesians to focus on the treatment of Muslim Uighurs in China and describing it as the “gravest threat” to religious freedom in a speech to an Islamic group.

In his address to the United Nations General Assembly on September 23, President Jokowi called for greater international cooperation: “Our concern grew even deeper during the Covid-19 pandemic. At a time when we ought to unite and work together, what we see, instead, is a deep division and growing rivalries.”