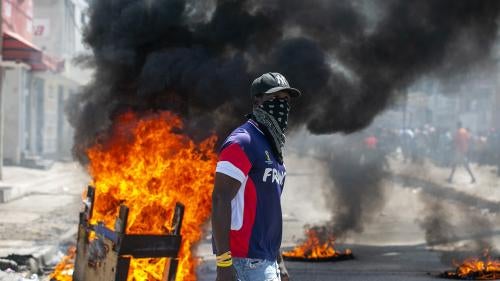 Protracted political instability and gang violence in 2020—often with state ties—contributed to the Haitian government’s inability to meet the basic needs of its people, resolve long-standing human rights problems, and address humanitarian crises.

Since the government’s announcement in July 2018 that it would eliminate fuel subsidies, widespread civil unrest has effectively paralyzed Haiti. Demonstrations intensified in 2019, amid evidence of embezzlement of funds intended for infrastructure and healthcare under three successive governments, including that of President Jovenel Moïse. Police responded with excessive force. Impunity for gang and police violence continued.

The electoral council postponed legislative elections indefinitely in October 2019, and President Moïse has been ruling by decree since January 2020, when the legislature’s mandate expired. Moïse blamed parliament for the postponement, for failing to approve an electoral law, while his opponents accused him of maneuvers to hijack the process.

The first cases of Covid-19 were confirmed in March, against a backdrop of increased gang violence. Relatively low case numbers may be due in part to under-reporting, as stigmatization and targeted violence against those perceived to be infected represses care-seeking. The pandemic has exacerbated vulnerabilities among marginalized populations.

In June, President Moïse decreed a new penal code, distinct from a draft code submitted to parliament in 2017. It will become law 24 months after its publication.

Haiti is facing one of its worst outbreaks of violence since 1986. The United Nations Integrated Office in Haiti (BINUH) reported 944 intentional homicides, 124 abductions, and 78 cases of sexual and gender-based violence from January through August 31, with at least 159 people killed as a result of gang violence, including a four-month-old infant.

Alleged complicity between politicians and gangs have contributed to a climate of insecurity. The Inter-American Commission on Human Rights (IACHR) has reported charges against 98 people, including 2 senior government officials, for a 2018 gang-related massacre of 71 people and related abuses in the La Saline neighborhood of Port-au-Prince. Perpetrators operated with complicity of authorities, including policeman Jimmy Cherizier, who has since been fired and now leads a coalition of gangs. The UN has called for authorities to bring those responsible to justice.

In 2019, Cherizier and other National Police also aided in killing at least 3, wounding 6, and burning the houses of 30 families in the Bel-Air neighborhood, where residents were protesting a rise in fuel prices, BINUH reported. Cherizier is suspected of attacks in the Grande Ravine neighborhood in 2017 as well. To date, no criminal proceedings have been initiated against those implicated.

The Core Group has called on authorities to investigate the August 29 killing of Monferrier Dorval, head of the Port-au-Prince bar association, outside his home hours after he called for constitutional reform in a radio interview.

Police did not intervene on August 31, when gangs killed at least 20 people and set houses afire in the Bel-Air and Delmas neighborhoods of Port-au-Prince, forcing at least 1,221 residents to shelter in public squares and a soccer field.

Human rights organizations such as the National Human Rights Defense Network (RNDDH) and Fondasyon Je Klere (FJKL) have documented numerous other attacks carried out by armed gangs with the protection of government authorities.

At least 12,000 people were reported displaced in 2020, the majority due to gang violence and a cyclone in July. Many more displaced people likely went uncounted.

Since the 2010 earthquake, nearly 33,000 people still live in displacement camps and at least 300,000 live in an informal settlement without government oversight. Authorities have not provided assistance to return or resettle them, or to ensure their basic rights in the settlement.

The country’s most vulnerable communities face environmental risks, including widespread deforestation, industrial pollution, and limited access to safe water and sanitation. According to international agencies, some 4.1 million Haitians—more than a third—live with food insecurity, and 2.1 percent of children suffer severe malnutrition. Low rainfall, exacerbated by rising temperatures due to climate change, chronically affects much of the country.

Since its introduction by UN peacekeepers in 2010, cholera has infected more than 819,000 people and claimed nearly 10,000 lives. Intensified control efforts—including an ambitious vaccination campaign—have achieved zero confirmed cases since the last week of January 2019. But over a third of the population lacks access to clean water and two-thirds has limited or no sanitation service, leaving Haiti vulnerable to a resurgence, and now to Covid-19.

Haiti’s prisons remain severely overcrowded, with many inmates living in inhumane conditions. Overcrowding is largely attributable to arbitrary arrests and pretrial detentions, a UN independent expert on Haiti reported in 2017.

As of September 2020, prisons housed nearly 11,000 detainees, 78 percent of whom were awaiting trial. A six-week suspension of judicial hearings at the peak of protests in 2019 increased numbers of people in pretrial detention.

Seven of the ten women raped by male prisoners during a riot at Gonaives detention facility in November 2019 were in prolonged pretrial detention.

At least 140 detainees in Haiti’s prisons tested positive for Covid-19 between March and July. According to a September 25 United Nations report, authorities had released 1,042 detainees from all prisons, including 80 women and 25 juveniles, falling short of the 5,000 discharges deemed necessary to manage the spread of Covid-19 among detainees, the UN secretary-general warned. Several of those released were facing serious charges and were granted executive clemency without consultation from BINUH or human rights groups.

Just under half of Haitians age 15 and older are illiterate. The quality of education is generally low, and 85 percent of schools are private, charging fees often too high for low-income families.

In the first eight months of 2020, BINUH reported 184 cases of human rights violations and abuses by police, including indiscriminate use of tear gas.

Six months after former President Jean-Claude Duvalier died in 2014, a Court of Appeal ruled that statutes of limitations are inapplicable to crimes against humanity, ordering investigations to continue for crimes committed during Duvalier’s presidency (1971-1986). As of October, re-opened investigations into arbitrary detentions, torture, disappearances, summary executions, and forced exile remained pending.

On June 23, former Haitian death squad leader Emmanuel “Toto” Constant, was deported from the US and detained. While on the payroll of the US Central Intelligence Agency, Constant founded a paramilitary organization that was complicit in murdering at least 3,000 Haitians between 1991 and 1994. In 2000, he was convicted in absentia for involvement in a 1994 massacre in the Raboteau neighborhood of Gonaïves. Under Haitian law, Constant has the right to a new trial. Given the climate of impunity characterizing the Moïse regime, lawyers and human rights groups have voiced concerns that Constant will go free. UN High Commissioner for Human Rights Michelle Bachelet urged Haiti to hold him accountable.

Jean-Robert Gabriel was also convicted in 2000 of involvement in the Raboteau massacre through command responsibility. President Moïse named Gabriel assistant chief of staff of the reinstated Haitian armed forces in 2018.

Until it comes into force in June 2022, there is no specific legislation against domestic violence, sexual harassment, or other forms of violence targeted at women and girls. Rape was only explicitly criminalized in 2005, by ministerial decree.

The new penal code also will legalize abortion in all circumstances up to the twelfth week of pregnancy, in cases of rape or incest, or if the mental or physical health of the woman is in danger. Abortion was previously prohibited in all circumstances. The penal code also lowers the legal age for consensual sex to 15 while only allowing legal abortion starting at age 18.

In November, the International Federation of Football Association (FIFA) Ethics Committee sanctioned Haitian Football Federation (FHF) President Yves Jean-Bart with a lifetime ban, following their investigation into evidence of systematic sexual abuse of female players. Throughout the investigation, witnesses and sexual abuse survivors reported being followed or threatened to intimidate them from cooperating with judicial authorities. As of October, FIFA had suspended four additional senior FHF officials implicated in the abuses.

Despite ratifying the Convention on the Rights of Persons with Disabilities, Haiti’s legislative framework is not yet harmonized with its standards. People with disabilities, including women and girls, continue to experience discrimination. The country lacks a minimum institutional framework to implement disability rights. Many people in Haitian society believe disability to be a curse, which places people with disabilities at a higher risk of being victims of violence.

Lesbian, gay, bisexual, and transgender (LGBT) people continue to suffer high levels of discrimination in Haiti, and there is no comprehensive civil law forbidding it.

Two anti-LGBT bills passed by the Senate in 2017 remained under consideration by the Chamber of Deputies at time of writing. One adds homosexuality as a reason for denying a Certificat de Bonne Vie et Mœurs, a certificate of good standing required by many employers and universities as proof that a person has not committed a felony. The other bans same-sex marriage, establishing prison sentences of up to three years and a fine of about US$8,000 for “parties, co-parties and accomplices” to a same-sex marriage. It also bans any public support or advocacy for lesbian, gay, bisexual, and transgender rights.

In November 2019, Charlot Jeudy, a gay man who founded Haiti's LGBTQ advocacy group Kouraj, was found dead at his home. As of October, circumstances surrounding his death and the results of an autopsy remain publicly unknown.

The precarious status of Dominicans of Haitian descent and Haitian migrants in the Dominican Republic remains a serious concern.

In response to Covid-19, the Dominican Republic suspended temporary legal status for more than 150,000 Haitian workers. Over 50,000 returned to Haiti from March 17 to June 28, according to the International Organization of Migration.

At least 250,000 Haitians returned between 2015 and 2018, after Dominican officials began deportations pursuant to a controversial Plan for the Regularization of Foreigners. Many were swept up in arbitrary, summary deportations. Others left under pressure or threat of violence.

Haiti is one of the most densely populated countries in the Western Hemisphere, and environmental degradation is a concern. In the past decade, foreign investors have pursued development of the nascent mining sector. Resistance is widespread, as communities fear the industry could destroy their farmland and contaminate their water.

A 2017 draft law the government presented to parliament is silent on the rights of those displaced by mining activities, the Global Justice Clinic of New York University School of Law reports, and it grants insufficient time for environmental review. It contains provisions that could render company documents, including those about environmental and social impacts, confidential for 10 years, preventing meaningful consultation with communities. It remained under consideration as of October.

The US government and the Organization of American States (OAS) have both called on Haiti to hold elections, though democracy activists have warned that current conditions are not conducive to free and fair elections. In September, against opposition from the Supreme Court, President Moïse appointed a nine-member Provisional Electoral Council tasked with organizing elections and preparing a constitutional referendum. Human rights advocates and others have said the presidential decree is illegal and unconstitutional.

In October, the UN special representative for Haiti stated that the country is “struggling to avert the precipice of instability” and warned of the risk of contested election outcomes and further violence.

In 2016, the UN secretary-general apologized for the UN’s role in the cholera outbreak and announced establishment of a trust fund to raise $400 million to provide “material assistance” to those most affected. As of October 2020, only $20.7 million had been pledged. Advocates have criticized the UN for blocking victims’ participation in designing assistance.

The United States continued deportations to Haiti throughout the pandemic. From March 18 to October 16, Haiti received 24 flights holding deportees, including several who tested positive for the virus upon arrival.