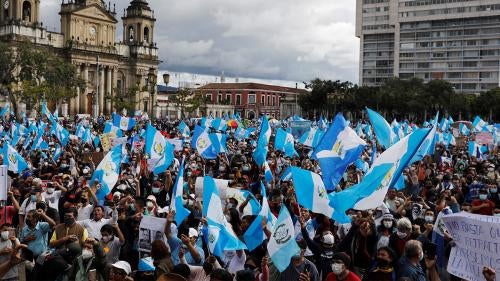 Since former President Jimmy Morales declined to extend the mandate of the United Nations-backed International Commission against Impunity in Guatemala (CICIG) in 2018, investigations have slowed down, limiting accountability for large-scale government corruption and abuses of power. Current President Alejandro Giammattei, who took office in January 2020, supported ending the mandate.

President Giammatei and his government have shown a hostile attitude toward the press and have been accused of hiding information about Covid-19 cases.

There are significant delays in the appointment of judges and high court justices. The congressional appointment process has been marred by allegations of corruption. Congress has flouted Constitutional Court rulings to ensure suitable candidates are appointed, instead ordering prosecutors to pursue criminal charges against Constitutional Court magistrates for ruling on the matter.

The Human Rights Ombudsperson faces a congressional effort to remove him and a possible criminal investigation for promoting LGBT and sexual and reproductive rights.

Violence and extortion by powerful criminal organizations, which the government has often been unable or unwilling to control, remain serious problems in Guatemala. Gang-related violence is an important factor prompting people, including unaccompanied children and young adults, to leave the country.

In recent years, investigations by the CICIG and the Attorney General’s Office have exposed more than 60 corruption schemes, implicating officials in all three branches of government, and prompting the resignation and arrest, in 2015, of the country’s then-president and vice-president.

However, long delays impede accountability, as courts often fail to respect legally mandated timeframes and may take months to reschedule suspended hearings. Criminal proceedings against powerful actors often suffer unreasonably long delays due to the extensive use of motions by criminal defendants. Intimidation of judges and prosecutors and corruption in the justice system remain problems.

Separation of Powers and Judicial Independence

Under Guatemalan law, Congress selects and appoints judges and justices from lists presented by Nominating Commissions. The process lacks a consistent system for ranking candidates and is marred by arbitrary decisions and conflicts of interest.

Thirteen seats on the Supreme Court and 135 seats on the Courts of Appeals for the 2019-2024 period should have been filled by the end of October 2019. On February 26, 2020, in response to a petition by prosecutors, the Constitutional Court suspended the appointment process, citing a criminal investigation that uncovered evidence of possible influence-peddling in the selection of judges. On May 6, the Constitutional Court ordered Congress to move forward with appointments but required lawmakers to consider whether candidates met constitutional requirements and whether their names had surfaced in the criminal investigation. At time of writing, Congress had yet to select judges and justices.

However, on June 28, Congress requested the Attorney General’s Office to investigate the Constitutional Court justices who ruled on the selection process for alleged malfeasance, violating the Constitution, and abuse of power. These crimes carry sanctions of up to 10 years of prison.

On August 7, the Attorney General's Office announced an investigation into alleged crimes by dozens of public officials with immunity, including 92 members of Congress, 13 alternate justices of the Supreme Court, 7 members of the Permanent Commission of Congress, and 6 magistrates of the Constitutional Court.

The limited progress that Guatemala had been making in recent years to adjudicate major crimes seems to have come to a standstill.

In March 2019, Congress passed the second of three required approvals for a bill that would provide amnesty for genocide and other atrocities, in clear violation of international human rights law. The same month, the Inter-American Court of Human Rights ordered Guatemala, in a binding ruling, to shelve the proposed legislation. In July 2019, Guatemala’s Constitutional Court issued a similar ruling. At time of writing, the bill had not been shelved.

President Giammattei’s government has shown open hostility toward the press and has limited access to information regarding confirmed cases and measures to address Covid-19.

In 2020, officials attacked media and individual journalists through discrediting remarks, false accusations, and anti-press rhetoric. The Attorney General’s Office for Crimes against Journalists had, as of July, registered over 60 complaints of threats and attacks on journalists by private individuals, security forces, and public officials. Complaints included cases of theft, abuse, and murder.

Unidentified gunmen shot journalist Bryan Guerra, a reporter at cable news channel TLCOM, on February 27, and he died on March 3. At time of writing, Guatemalan authorities had not announced any progress in the investigation or identified a potential motive, adding Guerra’s name to the list of 17 Guatemalan journalists killed between 2000 and 2020.

In September, Miguel Martínez, director of the Presidential Commission of the Center of Government—a commission of the executive branch in charge of coordinating, supporting, and advising the ministries—filed a criminal complaint alleging online media outlet Plaza Pública had harassed, threatened, and attempted to extort him and his family. The complaint came after Plaza Pública published a report on alleged business links between Martínez and President Giammattei, through what the report claimed may be a shell company.

Attacks against human rights defenders and social leaders increased in early 2020, according to the nongovernmental organization Unidad de Protección a Defensoras y Defensores de Derechos Humanos de Guatemala (Udefegua). It reported that 651 human rights defenders were subject to various types of attacks or harassment from January 2019 through the first four months of 2020.

The Inter-American Commission on Human Rights (IACHR) said at least eight human rights defenders had been murdered between June and August 2020.

On August 10, Benoit María, representative of Agronomists and Veterinarians without Borders (AVSF), a French non-governmental organization (NGO), was assassinated by unknown individuals. His car was shot at least 17 times. AVSF suspended its work in Guatemala while the murder was being investigated.

In February 2020, members of Congress from the ruling party approved amendments to the law regulating NGOs, limiting their right to free association. The following month, the Constitutional Court temporarily suspended the changes, which would have allowed the government to shut down organizations for disturbing public order and to establish restrictions on their receiving international funds.

A “Life and Family Protection” bill that would expand the criminalization of abortion remains under consideration by Congress. Abortion is currently legal only when the life of a pregnant person is in danger. The bill could subject women who have miscarriages to prosecution. It would also raise the maximum sentence for abortion from 3 to 10 years.

The Supreme Court ruled on August 12, 2020, that Ombudsperson Jordán Rodas had failed to comply with a 2017 decision ordering his office to cease activities that support or promote abortion, present abortion as a right, or promote its legalization. The decision contravenes international human rights standards on sexual and reproductive rights. Several international bodies have called on Guatemala to decriminalize and legalize abortion and to ensure access to safe abortion services.

Guatemala’s civil code limits the sexual and reproductive rights of women and girls with disabilities.

Guatemala has no comprehensive civil legislation protecting people from discrimination on the grounds of sexual orientation and gender identity. Employers, landlords, health care facilities, schools, and other public and private institutions face no penalty for discriminating. No law allows transgender people to change their name or gender marker on official documents.

The Life and Family Protection bill contains provisions that discriminate against LGBT people. It defines marriage as a union between a man and a woman and establishes that “freedom of conscience and expression” protects people from being “obliged to accept non-heterosexual conduct or practices as normal.”

In June 2020, several lawmakers attempted to remove the ombudsperson from office for using a rainbow flag on social media to commemorate Pride month, and for releasing videos calling on the government to fulfill its international obligation to prevent anti-LGBT violence and discrimination. At time of writing, the attempt had not succeeded.

The US-Guatemala Asylum Cooperative Agreement (ACA) entered into force in November 2019, allowing rapid transfer ofnon-Guatemalan asylum seekers to Guatemala without their being able to lodge asylum claims in the United States. Between November 21, 2019, and March 16, 2020, the US transferred 939 Honduran and Salvadoran asylum seekers, the vast majority women and children, to Guatemala under the agreement.

President Giammattei has reaffirmed Guatemala’s commitment to the ACA. Evidence shows that asylum seekers experience mistreatment, trauma, and stress at the US border. Guatemala has a nascent and cumbersome asylum system that is not capable of providing effective protection to asylum seekers forcibly transferred from the United States.

In mid-March, transfers under the ACA were temporarily suspended in response to the Covid-19 pandemic. In October, a large group of migrants from Honduras seeking to travel to the United States entered Guatemala. President Giammatei stated that 3,384 were returned to their country.

From its start in 2007 until the government failed to extend its mandate in 2018, the UN-backed CICIG played a key role in assisting Guatemala’s justice system in prosecuting corruption and violent crime. The CICIG worked with the Attorney General’s Office, the police, and other government agencies to investigate, prosecute, and dismantle criminal organizations operating in Guatemala. It identified more than 60 criminal structures, presented more than 110 cases—in which over 680 people were involved—and presented 34 proposals for legal reforms to Congress. An opinion poll in April 2019 showed more than 70 percent of the population supporting the CICIG.

In January 2020, the UN High Commissioner for Human Rights issued a report on Guatemala, referring to a “challenging human rights context, with persisting high levels of inequality, discrimination, insecurity and impunity.” The report cited “significant setbacks” in the advancement of human rights, the rule of law, and the fight against corruption and impunity.

In September 2020, the IACHR referred a case to the Inter-American Court related to the granting and establishment of a mining project in the territory of the Mayan Community. It noted that there is no legislation in Guatemala guaranteeing the Mayans’ right to collective property and there is an absence of adequate and effective recourse for the protection of their rights. The same month, the commission also urged Guatemala to investigate, prosecute, and punish both the material and intellectual perpetrators of murders and attacks against human rights defenders.