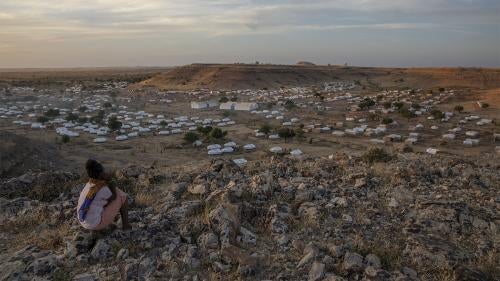 The security and human rights situation in Ethiopia deteriorated as Prime Minister Abiy Ahmed struggled to maintain order amid growing unrest and political tensions. The rights landscape was defined by ongoing abuses by government security forces, attacks on civilians by armed groups, deadly violence along communal and ethnic lines, and a political crisis.

The government postponed national elections in March citing Covid-19-related health risks. Several opposition parties condemned the decision. National elections are now slated to be held sometime in 2021. Relations between the federal government and Tigray regional officials worsened after the region held elections in September in defiance of the federal government’s directive. On November 4, Abiy ordered the military to take action against the ruling party in Tigray, in retaliation for what he described as an attack by Tigray regional forces on a federal military base, triggering significant clashes between regional and federal forces. The fighting raised concerns that the phone and internet communication blackout, as well restrictions on air and road access, threatened relief operations to communities at risk.

The June 29 assassination of popular Oromo singer Hachalu Hundessa triggered protests, a heavy-handed security force response, large-scale property destruction, and   violence by civilian assailants that targeted minority communities in Oromia. The attacks heightened existing social and political tensions, which were further exacerbated by the arrest of dozens of members of opposition parties in July for their alleged connection with the violence.

Schools were closed due to the pandemic until at least September 2020, affecting over 26 million children.

Little progress was made into ensuring justice for past and recent abuses, including investigations into the deadly October 2019 violence. The national human rights commission issued several critical statements  and visited detainees in the capital and in Oromia. Institutional reforms, notably around the security sector, and truth, reconciliation, and accountability—key commitments made earlier in the Abiy administration and all of which are key to dealing with heightened political and ethnic tensions—were limited.

Since January, government security forces, including Ethiopian National Defense and Oromia regional police forces, carried out abusive counterinsurgency operations in western and southern Oromia region. The fighting by all sides undermined the ability of humanitarian actors to operate in insecure areas.

Armed groups operating in the area also carried out attacks against officials, police, and civilians, including killings and lootings. The enforced disappearance of over a dozen Amhara university students, allegedly abducted by armed groups in western Oromia in December 2019, stoked anger at the government over its inaction and lack of transparency.  On November 1, after federal forces left the area, unidentified armed groups attacked mainly ethnic Amhara residents in Guliso village in western Oromia, resulting in dozens killed and property damage.

In the aftermath of Hachalu’s killing, security forces used excessive force against protesters and mourners gathered in different towns in Oromia and in Addis Ababa in June and July. A heavy security force presence established in many Oromia towns carried out abusive operations against Oromo communities. On August 17, protests broke out in eastern Oromia in response to the continued detention of prominent Oromo opposition leaders Jawar Mohammed and Bekele Gerba. In August, security forces arrested, beat, and used excessive force against scores of protesters, and allegedly killed over 40 people in eastern Oromia.

Following the arrest of local officials and activists, protests erupted on August 9-12 in Sodo, capital of Wolaita zone, in Southern Nations, Nationalities and Peoples' Region (SNNPR). In response, security forces beat and shot at crowds, and reportedly killed over 16 people.

Longstanding grievances and increasing polarization over historical and complex questions about land, politics, and identity, led to deadly violence among ethnic communities in 2020.

Violence on 22 university campuses in 2019, mainly in the Oromia and Amhara regions, continued in the first half of the year, prompting an estimated 35,000 students to flee.

In January, conflict between Amhara and Oromo groups erupted in Harar over the use of the old national flag and decorations during the Orthodox Christian celebration Epiphany, resulting in an unknown number of casualties and the destruction of property.

Afar and Somali communities routinely clashed over border demarcations and access to land and resources, claiming civilian lives on both sides. Fighting since January reportedly resulted in 35,5000 displaced—half of the conflict-induced displacements recorded in the country between January and June 2020.

Hachalu’s killing triggered one of the deadliest periods of unrest. Over 170 people were killed, some by security forces, others in attacks by civilian assailants who also looted and burned the businesses and homes of ethnic Amharas and other minority communities, causing significant property destruction and the displacement of over 9,000 people. In some cases, security forces failed to intervene in time to protect lives and property or participated in the looting.

Violence by armed groups, and among ethnic-Gumuz, Agew, Amhara, and other communities in the Metekel zone of the Benishangul-Gumuz region, intensified in April, causing residents to flee. Yet, authorities in Benishangul-Gumuz and Amhara region began returning thousands of internally displaced people within Metekel in April. Attacks by armed groups escalated in August and September, targeting security forces, officials, and residents, including ethnic Amharas, resulting in scores killed, kidnappings, property destruction, and renewed displacement.

On February 29, police arrested Abdi Regassa and eight other members of Oromo Liberation Front (OLF). Though the eight members were later released, Abdi Regassa’s whereabouts remained unknown for several months. He continues to be detained on an unclear basis and without charge at time of writing.

On March 27, Oromia police and intelligence officials arrested journalist Yayesew Shimelis following his comments about the government’s response to Covid-19. Police accused Yayesew of disseminating false information and refused to comply with two court bail orders for his release.

Following the late June violence, authorities arrested over 9,000 people, including government critics and journalists. In several high-profile cases, authorities appealed or seemed to ignore bail orders, requested more time to investigate, or transferred suspects between police authorities, some with overlapping jurisdictions, without informing relatives or counsel.

In September, authorities charged prominent opposition figures Jawar Mohammed, Bekele Gerba, and Eskinder Nega under the criminal code and under the newly enacted terrorism law for their suspected involvement in the unrest.

On January 3, the government shut down internet and phone connections for three months in western Oromia, significantly restricting freedom of expression and hampering the delivery of essential services, including amid a global health pandemic. Connectivity was restored on March 31.

On June 30, following Hachalu’s killing, authorities imposed a nationwide three-week internet shutdown. The shutdown impacted the communication and coordination of humanitarian agencies and limited access to information and critical reporting. Officials also arrested over a dozen journalists and media workers and launched independent investigations into several media outlets. Similarly, on November 4, internet and phone connectivity was cut in the Tigray region after the federal government ordered troops to respond to an alleged attack by Tigray forces on a military base in the area.

In January, parliament approved a law on hate speech and disinformation, taking effect on March 23. Rights groups  warned that the law contained overbroad and vague language that could have a chilling effect on free expression and access to information online. In May, journalist Yayesew Shimelis was the first person charged under it.

On April 8, Ethiopia declared a five-month state of emergency, giving authorities sweeping powers to respond to Covid-19. The regulations limited gatherings to four people, suspended suspects’ right to appear before a judge within 48 hours, and broadly restricted media reporting on Covid-19 news if reporting could “cause terror and undue distress among the public.”

In January, the Ethiopian government unofficially changed its asylum policy, which for years granted all Eritrean asylum seekers refugee status as a group, and began only registering some categories of new arrivals at the Eritrea border, excluding others, particularly unaccompanied children. The fighting between federal government forces and Tigray regional forces sparked concerns by humanitarian actors of the risk to vulnerable groups in Tigray regional state, including 100,000 IDPs and 96,000 refugees.

Ethiopia enjoyed support from international actors and most of its regional neighbors, due to its role as host of the African Union (AU), its contributions to United Nations peacekeeping and regional negotiations and counterterrorism efforts, and migration partnerships with Western countries.

The European Union has been trying to boost its relations with Ethiopia. EU Commission President Ursula von der Leyen visited Addis in December 2019, the first place she officially visited outside Europe.

In February, the EU high representative and several commissioners visited Ethiopia, reaffirmed EU support for Ethiopia’s reform efforts, and promised to deploy an EU electoral observation mission for the March elections, which was later postponed. EU high officials visited the country again in October, reiterating their support for the country’s reforms, though raising concerns over the “more complicated” situation.

In February, US Secretary of State Mike Pompeo visited Ethiopia, reiterated US support for Ethiopia’s domestic reforms, and emphasized the importance of holding free and fair elections.

The United Arab Emirates (UAE) committed US$3 billion in investment and assistance and is financing large-scale infrastructure and development initiatives.

Two years after Ethiopia and Eritrea signed a peace agreement, issues around the agreement remain unsettled, and the borders remain heavily fortified.

Relations with Egypt remained rather tense due to Egypt’s concerns that Ethiopia’s Grand Renaissance Dam (GERD) would divert water from the Nile River. Although negotiations under AU auspices resolved some concerns of the parties, disagreements related to drought mitigation and dispute resolution remained unsolved. On September 2, the US said it would suspend around $100 million in aid to Ethiopia, reportedly over the lack of progress on the dam talks, in which the US had played an earlier role in mediating.

Then UN special rapporteur on freedom of expression, David Kaye, visited Ethiopia in December 2019, the first official mission by any mandate holder to the country since 2006. In a June report, the special rapporteur welcomed steps to reform previous laws restricting freedom of expression but remained concerned by significant penalties in the media law and vague provisions in the hate speech and disinformation law.

Following the late June unrest, UN special procedures, the EU and US Senate and House Representatives, issued statements of concern surrounding the violence and unrest. The UN called for a transparent and independent investigation into the singer’s death, while the AU called for an independent investigation into the events, underscoring growing global concerns over Ethiopia’s human rights situation.

Escalating tensions and clashes in the Tigray region prompted an urgent international response urging de-escalation and dialogue, including from the UN secretary-general, the German foreign minister, the UN high commissioner for human rights, the AU, and the regional body, the Intergovernmental Authority on Development (IGAD).