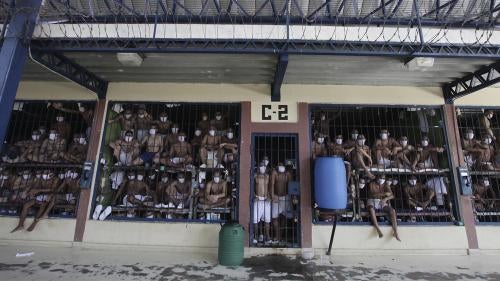 Since taking office, President Nayib Bukele has undermined basic democratic checks and balances. In February 2020, he entered the Legislative Assembly with armed soldiers in an apparent effort to intimidate legislators into approving a loan for security forces. He has publicly defied three rulings by the Constitutional Chamber of the Supreme Court prohibiting arrests for violations of a Covid-19-related lockdown Bukele had decreed.

In March, Bukele decreed a nationwide, mandatory lockdown in response to the Covid-19 pandemic, and ordered security forces to detain people breaking it. Thousands have since been detained in overcrowded and unsanitary centers called “containment centers.”

Girls and women accused of having abortions have been imprisoned for homicide and aggravated homicide. LGBT individuals face discrimination and police violence.

President Bukele continued using the military in public security operations, despite a 1992 peace accord stipulation against it.

During the Covid-19 lockdown, which lasted from March 21 through June 14, he ordered law enforcement agents to detain violators and send them to containment centers, which became rapidly overcrowded and unsanitary. Authorities did not isolate people who tested positive for the coronavirus from other detainees. More than 16,000 people were sent to these facilities and some were detained for up to 40 days.

President Bukele has encouraged abusive lockdown enforcement measures, including excessive use of force. In April, he ordered the police and military to be “tougher with people violating the quarantine,” and said he would not mind if the police “bent someone’s wrist” during an arrest.

During the enforcement of lockdown measures, the Ombudsperson’s Office reported more than 1,600 complaints of human rights violations, including over 620 of the right to freedom of movement.

After a spike in murders in April, Bukele announced he “authorized” the use of lethal force by security forces for “self-defense and to protect the lives of Salvadorans,” even when not a measure of last resort, saying “the government will see to the legal defense of those who may be unjustly charged for defending the lives of honorable people.”

Between 2014 and 2018, the police committed 116 extrajudicial killings, according to the Ombudsperson’s Office. Only two cases resulted in convictions.

Overcrowding and poor sanitation endangered the health of prisoners. The risk of tuberculosis infection among people in prisons in El Salvador is 99 times higher than in the general population. These conditions risk further spreading Covid-19.

Approximately 60,000 gang members operate in El Salvador, according to media. They exert control over territory and extort and gather intelligence on residents and those passing through, particularly around public transit, schools, and markets.

Numerous security and elected officials have collaborated with gangs in criminal operations, media report, and all political parties have negotiated with them, including for electoral campaigns.

The National Police reported 706 homicides from January to July 2020, compared to more than 1,700 during the same period in 2019, a 59 percent drop. In September, El Faro, a digital outlet, reported that President Bukele’s government had been negotiating with MS-13 over the past year, granting jail privileges to imprisoned members in exchange for MS-13 commitment to lower the homicide rate and to provide electoral support for the February 2021 elections. On September 4, Attorney General Raúl Melara said his office would investigate.

From January 2014 to October 2019, police registered over 11,900 disappearance victims (including more than 400 children)—which exceeds the estimated 8,000 to 10,000 disappeared during the civil war (1979-1992). The disappearances are committed by a range of actors, including gangs and the police. Few cases are investigated.

Impunity for government abuses is the norm.

A trial of former military commanders accused for the 1981 El Mozote massacre started in 2016 and continued at time of writing. Soldiers committed mass rape and killed 978 civilians at El Mozote, including 553 children. In September 2020, soldiers refused to comply with a court order that allowed a judge to review military records about the massacre. President Bukele said he was the only one entitled to declassify military files and announced he would hand over to the judge “all of the existing military archives” on the massacre. In October, the court reported that it had received the military records. However, the information they contained was almost identical to the records the previous government had given to the courts, which also stated that the presidency had no additional information on the massacre.

Investigations have reached hearings in only 14 of 48 cases involving 116 extrajudicial killings committed from 2014 to 2018, the Salvadoran Ombudsperson for the Defense of Human Rights (PDDH) has reported. Two cases resulted in convictions.

In September 2020, a Spanish court found Inocente Montano, a former Salvadoran army colonel and former vice minister of public security, guilty of the 1989 murder of five Jesuit priests at the Central American University in San Salvador. He was sentenced to 133 years in prison.

Former President Antonio Saca (2004-2009) is serving a 12-year prison sentence on corruption charges for embezzling over US$300 million. Former President Mauricio Funes (2009-2014), who has been living in Nicaragua since 2016, faces multiples criminal charges, including corruption, embezzlement, and money laundering. Nicaraguan President Daniel Ortega granted him political asylum in 2019.

To address the Covid-19 crisis, the National Assembly authorized flexible purchasing rules for the executive branch during the emergency, including for “direct purchases” of medical supplies and services. At time of writing, the Attorney General’s Office was investigating six government officials, including the current health minister, for corruption and improper purchases.

Abortion is illegal under all circumstances. Providers face prison sentences of 6 months to 12 years.

According to the latest available statistics, over 150 girls and women, mostly from impoverished areas, were prosecuted between 2000 and 2011 for what lawyers and activists say were obstetric emergencies. In multiple cases, the courts accepted as evidence a questionable autopsy procedure known as the lung float test to support claims that a fetus was delivered alive.

Since 2009, 41 women who were being prosecuted by the Attorney General’s Office have been found not guilty or have had their sentences commuted.

Evelyn Hernández stood trial for a second time in August 2019 on charges of aggravated homicide for a stillbirth in 2016, which followed her rape at age 17. Hernández was acquitted in July 2020.

El Salvador continues to have a legislative framework inconsistent with international disability rights law, including restrictions on legal capacity for people with intellectual and psychosocial disabilities, as well as insufficient measures to improve physical and communication accessibility. Criminal gangs have attacked women and girls with disabilities with high levels of impunity.

LGBT individuals remain targets of homophobic and transphobic violence by police, gangs, and others. Salvadoran LGBT rights organizations report over 600 killed since 1993. Official statistics released in January 2020 showed 692 cases of violence against LGBT and intersex people from January 2015 to June 2019.

In May 2019, the Ombudsperson’s Office documented 19 unsolved murders of LGBT people, primarily transgender women, between 2009 and 2016.

Between October 2019 and April 2020 alone, at least seven trans women and two gay men were murdered in El Salvador, with details in the cases suggesting the killers had been motivated by hatred based on the victims’ gender identity or sexual orientation.

In July 2020, three police officers were found guilty in connection with the death of Camila Díaz Córdova, a transgender woman deported from the United States. They were given 20-year prison sentences. It was a landmark case, delivering El Salvador’s first conviction for the killing of a transgender person.

In June 2019, President Bukele dissolved the Secretariat of Social Inclusion, within which the Directorate on Sexual Diversity was based, and subsumed the directorate into an existing Gender Unit in the Ministry of Culture, renamed the Gender and Diversity Unit. LGBT activists criticized the move, protesting that few of their grave concerns regarding safety and discrimination could be adequately addressed under the ambit of culture.

The Association of Journalists of El Salvador reported 61 press freedom violations from June 2019 to May 2020, including attacks, digital harassment, and restrictions on journalists’ work and access to public information.

Since taking office, President Bukele has assaulted the credibility of independent media, particularly El Faro, Revista Factum and Gato Encerrado, accusing them of spreading “fake news,” and used government-administered media to publish articles attacking them. In July 2020, a cyber-attack on Gato Encerrado resulted in the loss of everything published over the preceding six months. That same month, Gato Encerrado reporter Julia Gavarrete’s computer was stolen from her home. The editor of Revista Disruptiva likewise suffered the theft of two computers at home. Human rights and press freedom groups suspect these robberies were related to their journalistic work, given their critical stance on government policies and the fact that no other valuable items were stolen in either case.

According to the latest available statistics, 71,500 people were internally displaced from 2006 to 2016.

As of 2019, Salvadorans had over 136,000 asylum applications pending in other countries, the majority of them in the US.

From 2013 through 2019, 138 Salvadorans were killed after deportation from the US, and more than 70 were beaten, sexually assaulted, extorted, or tortured.

For fiscal year 2020, the US appropriated over US$72 million in bilateral aid to El Salvador, particularly to reduce extreme violence and strengthen state institutions.

In March 2020, the United Nations Working Group on Arbitrary Detention, citing long periods of imprisonment of women who had suffered obstetric emergencies or miscarriages, urged El Salvador to adopt structural reforms to “end the arbitrary detention of women in vulnerable conditions.”

After an in-country visit to El Salvador in December 2019, the Inter-American Commission on Human Rights expressed concern about high levels of violence, military participation in law enforcement operations, prison overcrowding and poor conditions, and violence against women, girls, and LGBT people.