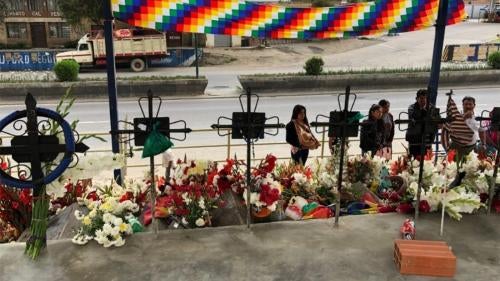 Luis Arce, from the Movement Toward Socialism (MAS, in Spanish), the party of former President Evo Morales, won the October 18 presidential election by wide margin. Arce received the presidential sash from Jeanine Áñez, who became interim president in November 2019, after president Morales resigned amid nationwide protests motivated by allegations of fraud—now disputed—in the October 2019 elections, and after the commander of the armed forces asked him to step down.

The Morales administration had created a hostile environment for human rights defenders and promoted changes to the judiciary that posed a serious threat to the rule of law. Instead of breaking with the past, interim President Áñez adopted measures that undermined fundamental human rights standards.

Her administration abused the justice system to persecute associates and supporters of Morales, and it failed to promote independent investigations into human rights abuses and election-related acts of violence in October and November 2019.

Interim President Áñez issued decrees that would have shielded military personnel from accountability for abuses during crowd-control operations and that threatened freedom of expression. Her government repealed both measures in response to criticism. 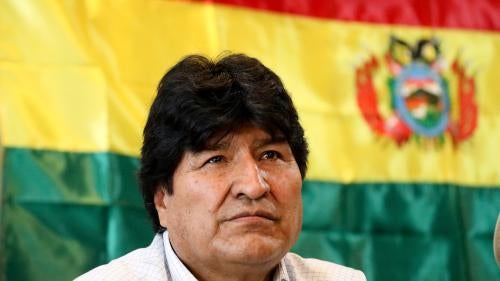 In March, the interim government closed the country’s borders in response to the pandemic, leaving some 1,300 Bolivians, including older people, children, and pregnant women, stranded in camps in Chile. Weeks later the government let them enter, and they were quarantined.

The pandemic revealed structural weaknesses in the healthcare system. Bolivia had 490 intensive care beds in March, an intensive care doctors’ association reported, and had only added 30 by August.

In May, the interim government bought 170 respirators—for use in ambulances, not hospitals—allegedly paying almost three times their real cost, prompting prosecutors to open a criminal investigation into possible corruption against government officials, including the then-health minister.

Medical examiners reported finding the bodies of more than 3,000 people who had died of suspected or confirmed Covid-19 outside hospitals from April to mid-July. Some of the bodies were lying on the streets.

In August, demonstrators blocked roads to oppose the postponement of elections. The government accused protestors of keeping oxygen from reaching hospitals and, as a consequence, causing the death of about 40 Covid-19 patients. Hospitals had reported running out of oxygen even before the protests.

United Nations Women reported that the economic consequences of the pandemic disproportionately affected Bolivian women. Women earn 30 percent less than men on average; 70 percent of them work in the informal sector; and demands for their work as the primary caregivers for older people, children, and the sick rose during the pandemic. The interim government’s Covid-19 aid programs did not adequately address women’s needs, UN Women concluded, particularly in rural areas.

Government restrictions on movement in response to Covid-19 reduced many Indigenous communities’ access to food, medicines, and markets for their products, the Ombudsperson’s Office, a state agency tasked with protecting human rights, reported. Some indigenous people in remote areas had difficulty accessing government aid and some lacked identification documents needed to obtain aid.

Instead of working with schools to maintain lessons during the pandemic, the interim government in early August cancelled the remainder of the 2020 school year, through December, leaving almost 3 million children without education.

Overcrowded and unsanitary conditions in prisons were conducive to the spread of Covid-19. In January, 18,126 people were incarcerated in facilities operating at 212 percent capacity, the Ombudsperson’s Office reported. Sixty-six percent of detainees were awaiting trial.

In April, the interim government issued a decree, which entered into effect in May, to release certain categories of people in detention, including pregnant people, some older inmates, and some inmates with chronic health conditions, “serious” disabilities, or caregiving responsibilities. In June, the government said as many as 3,500 detainees would be released, but only about 300 had been released a month later.

The government reported that 40 detainees had died of Covid-19 as of July. Detainees staged protests in several facilities, saying they lacked healthcare and protection from the virus. As of September, the Ombudsperson’s Office was continuing to report a lack of cleaning and hygiene products in several prisons.

Evo Morales weakened judicial independence during his almost 14 years as president. The 2009 constitution made voters responsible for electing high court judges from lists created by the Plurinational Assembly, where Morales’ party held a majority in both houses during most of his time in office. The party packed the lists with its supporters. In 2010, all judges appointed before 2009 were deemed “temporary.” Scores of them were summarily removed.

During Morales’ government, prosecutors filed what appeared to be politically motivated charges against several of his political rivals.

About 80 percent of judges and 90 percent of prosecutors remain “temporary,” heightening the risk that they will issue decisions to please authorities in order to remain in their positions.

Instead of strengthening judicial independence, the Áñez government publicly pressured prosecutors and judges to further its interests. Prosecutors launched criminal investigations, many apparently politically motivated, of more than 150 people linked to the Morales government for sedition, terrorism, or membership in a criminal organization.

Human Rights Watch documented baseless charges, violations of free speech and due process, infringement on freedom of expression, and excessive and arbitrary use of pretrial detention.

Morales himself faced terrorism charges that appeared politically motivated. Prosecutors also charged Patricia Hermosa, Morales’ attorney and former chief of staff, with terrorism, financing of terrorism, and sedition, based solely on her having telephone contact with Morales after he had resigned. She was held in pretrial detention for more than six months while pregnant, in violation of Bolivian law, and without access to medical care. She had a miscarriage in jail in March 2020.

The Áñez administration filed criminal complaints against at least four judges for granting house arrest to people linked to the Morales administration who had been awaiting trial in detention. Police initially detained one of the judges, but the judge was released the next day after another judge ruled the detention illegal.

In August 2020, the Plurinational Assembly, where Morales’ party had a majority, passed a law that prohibits former officials from traveling outside Bolivia for three months after leaving office. The law arbitrarily infringes on outgoing officials’ right to freedom of movement.

After winning the October 18, 2020 presidential election, Arce said the justice system should be independent from politics. In December 2020, he established a commission of experts to draft proposals to reform the justice system.

At least 37 people died in protest-related violence, and more than 800 were injured, the Ombudsperson’s Office reported. Two anti-Morales protesters were killed in the town of Montero. Twenty people were killed in two massacres in Sacaba and Senkata, in which scores of witnesses said state forces opened fire on pro-Morales demonstrators. Prosecutors told Human Rights Watch in February 2020 that the armed forces had refused to provide the names of soldiers who participated in those operations, let alone grant interviews with them. In September, the attorney general said the armed forces had not abided by a judicial order to provide prosecutors with the operation plans for those deployments.

The massacres occurred after Interim President Áñez issued a decree on November 15, 2019, that granted the military overly broad discretion in using force against protesters, sending a dangerous message that soldiers would not be held accountable for abuses. In response to criticism, President Áñez repealed the decree.

The Office of the United Nations High Commissioner for Human Rights and the Ombudsperson’s Office documented scores of cases of arbitrary detentions and torture by police in the city of El Alto on November 11, 2019.

Bolivia has only prosecuted a few of the officials responsible for human rights violations committed under authoritarian governments between 1964 and 1982, partly because the armed forces have at times refused to share information about abuses.

A “Truth Commission” established in 2017 transferred 6,000 case files of victims of the dictatorships to the Plurinational Assembly in December 2019 and presented its final report in March 2020.

The National Press Association, which represents the country’s main print media, documented 87 instances of physical attacks against journalists in 2019, most of them by demonstrators; 14 attacks against the premises of media outlets; and 16 cases of authorities and politicians harassing and threatening the press. For instance, in November 2019 then Communication Minister Roxana Lizárraga said journalists who “commit sedition” would suffer “pertinent actions,” including “deportation.” Attacks against reporters, mostly by demonstrators, continued in 2020.

The interim government adopted policies threatening free speech, including an overly broad provision in a Covid-19 decree that would have allowed prosecution of government critics. In response to public outcry, the government revoked the provision in May 2020.

The interim government also established a “cyberpatrolling” unit to identify those who “misinform” the public about Covid-19, particularly political opponents. The “cyberpatrols” resulted, for instance, in charges of sedition and other crimes against Mauricio Jara, a Morales supporter, for calling the government “dictatorial” through a private messaging service, “misinforming,” and urging protests. He was detained in April 2020 and, as of September, awaited trial behind bars.

Women and girls remain at high risk of violence, despite a 2013 law establishing comprehensive measures to prevent and prosecute gender-based violence. The law created the crime of “femicide”: the killing of a woman under certain circumstances, including domestic violence.

The Attorney General's Office reported 117 femicides in 2019, and 86 between January and September 2020. It reported more than 20,000 cases of violence against women from January through August 2020.

Under Bolivian law, abortion is not a crime when a pregnancy results from rape or is necessary to protect the life or health of a pregnant woman or girl.

In July 2020, a court in La Paz ordered the national civil registry to register a same-sex couple’s relationship as a “free union,” ruling that the Bolivian Constitution and the country’s international legal obligations require laws and administrative procedures to be interpreted in a manner consistent with equality and non-discrimination principles.

The civil registry appealed the ruling to the Constitutional Court.

The interim government assented to a recommendation by the Inter-American Commission on Human Rights to establish an Interdisciplinary Group of Independent Experts to investigate acts of violence and human rights violations in Bolivia between September 1 and December 31, 2019., but the interim government backtracked on its commitment. The group started its work in November 2020, after Arce became president.

In August 2020, UN High Commissioner for Human Rights Michelle Bachelet said justice for those crimes was “essential” for victims and for the country. Her office called for investigations into threats and attacks against journalists, as well as human rights defenders working for the Ombudsperson’s Office.