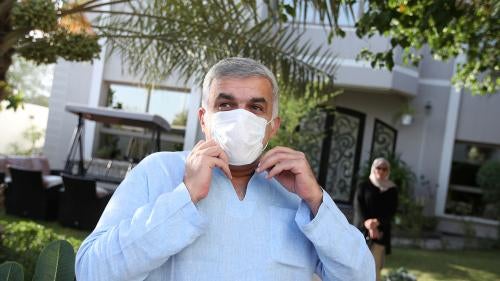 The human rights situation in Bahrain did not improve in 2020. There are 27 individuals currently on death row, of whom 25 are at imminent risk of execution. The government has put six people to death since it ended a moratorium on executions in 2017.

Authorities arrested, prosecuted, and harassed human rights defenders, journalists, opposition leaders, and defense lawyers, including for their social media activity. All independent Bahraini media have been banned since 2017 from operating in the country and all opposition groups dissolved.

Nabeel Rajab, one of Bahrain’s most prominent human rights defenders, was released from prison on June 9 to serve the rest of his five-year sentence under the alternative sanctions law.

Health and hygiene conditions in Bahrain’s overcrowded prisons remain extremely serious. Although Bahrain released 1,486 prisoners in March due to the health risk posed by Covid-19, the releases have excluded opposition leaders, activists, journalists, and human rights defenders—many of whom are older and/or suffer from underlying medical conditions.

Authorities failed to hold officials accountable for torture and ill-treatment. Oversight mechanisms are not independent of the government.

Bahrain continued to deny access to independent rights monitors and the UN special procedures, including the special rapporteur on torture.

On June 9, 2020, authorities released from prison prominent human rights defender Nabeel Rajab to serve the rest of his five-year sentence on speech charges under the alternative sanctions law. Rajab’s conviction arose from his 2015 tweets alleging torture in Jau Prison and criticizing Bahrain’s participation in the Saudi-led military campaign in Yemen. The 2107 law allows courts to impose “alternative” sentences after a detainee serves half of their sentence, which Rajab completed on November 1, 2019.

Thirteen prominent dissidents have been serving lengthy prison terms since their arrest in 2011 for their roles in pro-democracy demonstrations. They include Abdulhadi al-Khawaja, a founder of the Bahrain Center for Human Rights, as well as Abduljalil al-Singace, a leader in the unrecognized opposition group Al Haq, both serving life terms.

Shaikh Ali Salman, leader of Al-Wifaq, Bahrain’s largest but now forcibly dissolved opposition political society, is also serving a life term after the Court of Cassation upheld his sentence in January 2019 on trumped-up charges of allegedly spying for Qatar.

In 2020, Bahrain escalated its suppression of online and social media activity and prosecuted several public figures solely for their posts on social media, including prominent lawyers Abdullah Al Shamlawi and Abdullah Hashim. In May 2019, the Interior Ministry declared that it will prosecute people who follow “inciting accounts” or share their posts on Twitter.

No independent media have operated in Bahrain since the Information Affairs Ministry suspended Al Wasat, the country’s only independent newspaper, in 2017. Foreign journalists rarely have access to Bahrain, and Human Rights Watch and other rights groups are routinely denied access. International wire services, when they cover Bahrain, do so from Dubai or elsewhere outside the country. Six journalists are currently imprisoned.

There are 27 individuals currently on death row, of whom 25 are at imminent risk of execution, according to the Bahrain Institute for Rights and Democracy.

On July 13, the Court of Cassation upheld the death sentences on Mohamed Ramadan and Hussein Ali Moosa, despite unfair trials and credible evidence that their convictions were based on confessions coerced under torture.

The Special Investigation Unit’s (SIU)’s investigation into Moosa and Ramadan’s torture allegations found “suspicion of the crime of torture … which was carried out with the intent of forcing them to confess to committing the crime they were charged with.”

However, the investigation failed to comply with the Istanbul Protocol, the internationally recognized legal and professional standards for effective investigations of torture allegations.

Agnes Callamard, the United Nations special rapporteur on extrajudicial, summary or arbitrary executions, warned that Moosa and Ramadan’s “conviction resulting in the death penalty would be arbitrary and a clear violation of their right to life.”

In 2017, Bahrain ended a moratorium on the use of the death penalty. In July 2019, Bahrain executed three men, including Ali al-Arab and Ahmad al-Malali who had been sentenced to death in a mass trial marred by allegations of torture and serious due process violations.

Bahrain released 1,486 prisoners in March due to the health risk posed by Covid-19, but the releases excluded opposition leaders, activists, journalists, and human rights defenders – many of whom are older and/or suffer from underlying medical conditions.

Authorities in 2020 failed to credibly investigate and prosecute officials and police officers who allegedly committed serious violations, including torture.

Almost 300 persons whom the authorities have stripped of their citizenship in recent years remain without Bahraini nationality, rendering most of them stateless.

In 2019, King Hamad reinstated the citizenship of 551 individuals and courts restored the nationality of another 147 individuals. Bahrain also amended its citizenship revocation laws, restricting the power to strip nationality to the cabinet. Under the amendments, the king and the judiciary no longer have the power to unilaterally strip Bahrainis of their citizenship for national security or terrorism crimes. All known citizenship revocations since 2012 have been handed down by the courts, or by royal decree, or by order of the Interior Ministry.

On March 5, authorities released Hajer Mansoor, the mother-in-law of prominent exiled human rights defender Sayed Ahmed al-Wadaei. Police arrested Hajer in March 2017 and a court convicted her in October 2017 on dubious terrorism charges that appear to have been filed in reprisal against al-Wadaei’s human rights work. The judicial process was marred by due process violations and allegations of ill-treatment and coerced confessions. Two other members of al-Wadaei’s family remain imprisoned.

Bahrain’s penal code criminalizes adultery and sexual relations outside marriage, a violation of the right to privacy, which disproportionately harms women and migrant women. Although no law explicitly criminalizes same-sex relations, authorities have used vague penal code provisions against “indecency” and “immorality” to target sexual and gender minorities. There is no law that prohibits discrimination on the grounds of gender identity or sexual orientation.

In December 2018, Bahrain amended its labor law to ban discrimination based on sex, origin, language or creed, and sexual harassment in the workplace, but the law does not refer to sexual orientation or gender identity.

Bahrain continued to participate in Yemen military operations as part of the Saudi Arabia-led coalition, which is responsible for serious laws of war violations. The coalition has failed to credibly investigate potential war crimes, and coalition members, including Bahrain, have provided insufficient or no information about their role in alleged unlawful attacks.

The US maintains a major naval base in Bahrain.

In June, the European Union welcomed the partial release of Nabeel Rajab. In July, the EU expressed concerns about the death sentences of Mohamad Ramadan and Hussein Ali Moosa and urged Bahrain to halt their executions and re-introduce a moratorium on executions as a step towards abolition. In September, the European Parliament reiterated its call to halt the export of equipment that can be used for internal repression to Bahrain.