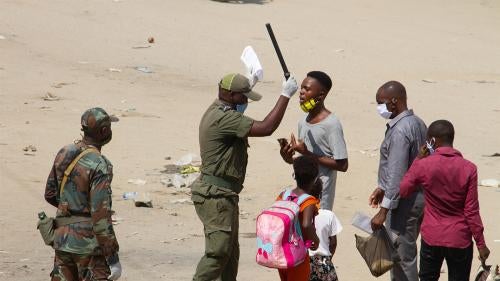 During 2020, Angolan authorities struggled to contain abuses by state security forces implicated in killings and excessive use of force against unarmed people who allegedly violated Covid-19 restrictions.

There was progress in respecting the rights to freedom of expression and peaceful assembly, allowing several protests and marches across the country. But the crackdown on peaceful protesters and activists in the oil-rich enclave of Cabinda continued. Angolan authorities continued forced evictions and demolitions without the necessary procedural guarantees or the provision of alternative adequate housing, even during the Covid-19 pandemic lockdown. The government approved the country’s long-awaited human rights strategy, making human rights an issue of state security.

Authorities struggled to contain the rise of Covid-19 cases, despite declaring a partial lockdown in late March. Under the lockdown, people were only allowed out of their homes to buy medicine, food, water, and cooking gas, with a schedule put in place for markets to operate.

But many Angolans, especially street traders, broke the lockdown rules to try to earn some money. Government forces reacted with excessive use of force, which in some cases resulted in killings of innocent unarmed people. In May, after the end of a three-month state of emergency permitted by the constitution, the government introduced a state of calamity until further notice. This allows the government to keep some of the state of emergency measures to contain the spread of Covid-19, including restrictions on the movements and gatherings of people. State security forces were implicated by human rights groups and media in serious human rights abuses, including killings, harassment and arbitrary arrests, as they tried to enforce lockdown rules and restrictions.

In September, a medical doctor died in police custody after being detained for not wearing a face mask inside his car. His suspicious death sparked protests on social media and the streets of Luanda, the country’s capital. In response, Angolan authorities opened an investigation into the circumstances surrounding the doctor’s death. As of early December, the results of the investigation were not publicly known.

In September, Police Chief Paulo de Almeida condemned what he called  “bad actions” of some officers,” including excessive use of force, and asked the Angolan people not to lose trust in the police. Earlier in August, Amnesty International released a report showing that security forces tasked with implementing Covid-19 restrictions had killed at least seven boys and young men between May and July 2020.

In April, Angolan authorities released nearly 1,900 people in pretrial detention to help prevent the spread of the coronavirus in the nation’s prisons. In April, Interior Minister Eugénio César Laborinho visited prisons across the country to assess their capability to prevent and treat Covid-19 cases. He expressed concerns over the prisons’ inadequate capacity to quarantine newly arrived inmates. Nevertheless, Angola’s police continued to detain and place hundreds of people in custody for low-level crimes, leading to a daily influx of new detainees. On May 1, police released  data showing that almost 300 people had been detained in 24 hours for violating state of emergency rules. Despite recommendations by human rights groups such as Human Rights Watch, the Angolan government did not consider alternatives to jail time and avoid detaining people for nonviolent or minor offenses, including those who violate the state of emergency law.

The crackdown on peaceful protesters and activists in the Cabinda enclave continued in 2020. In violation of the International Covenant on Civil and Political Rights, of which Angola is a state party, authorities refused all the requests by Cabinda pro-independence activists to peacefully assemble. Where protests and marches took place, police violently interrupted them, and illegally detained the participants. In January, state security forces rounded up activists from their homes after they attempted to hold a protest in December 2019, to demand independence from Angola.

In June, plainclothes police officers arbitrarily arrested the president of the separatist group Union for the Independence of Cabinda and his vice president after they displayed leaflets of the organization in the streets of the city of Cabinda. According to their lawyers, the police officers physically assaulted the two during the arrest. They were charged with rebellion, outrage against the state, and criminal association. As of early December, the two men were still detained at Cabinda Province Civil Prison under concerningly inhumane conditions, despite calls for their release.

Angolan authorities continued to forcibly evict people and conduct demolitions without the necessary procedural guarantees or the provision of alternative adequate housing or adequate compensation for those evicted. This practice continued even during the Covid-19 pandemic and government-imposed restrictions on movement, exposing those evicted to increased risk of infection.

In June, authorities in Benguela province demolished over 70 homes, a health center, and a school at Salinas neighborhood, allegedly because  its structures had been illegally built in an area reserved for state projects. As of early December, the evicted people were living in makeshift homes near the site of the demolition.

In July, authorities in Luanda demolished 24 houses in Viana area, without previously notifying the residents and without presenting a court order. Moreover, hundreds of families who were forcibly evicted from their houses from 2013 to 2019 continued to await resettlement, including the residents of an informal settlement of “Areia Branca” in Luanda, who were illegally evicted in 2013 by a company contracted by the office of Luanda’s governor to modernize the city.

Angolan authorities began in 2020 to implement measures to fight human trafficking which according to government is reaching “alarming levels.” Between February and July, dozens of officials from the defense, security, and judicial sectors received training on combating  human trafficking, and identifying and protecting victims. In July, the Angolan state secretary for human rights revealed that the country had recorded over 100 cases of human trafficking between 2015 and 2020. According to the official, the border provinces of Cunene, Cabinda, Zaire and Luanda Norte, as well as the capital, Luanda, had registered most of the cases of human trafficking. Victims included children used as beggars, and women used for sexual exploitation.

Angola continued its mediation efforts to bring peace and stability to the Great Lakes region. In February, the president of Uganda, Yoweri Museveni, and his Rwandan counterpart, Paul Kagame, met in Luanda to discuss a border dispute between the two countries, and review the August 2019 peace pact that they signed.

During a visit to Luanda in February, US Secretary of State Mike Pompeo praised President Joao Lourenco for his efforts in fighting corruption.

In September, the European Union and Angola agreed to launch a roadmap aimed to establish a partnership on security and defense. The initial focus will be on consolidating the global rules-based order in support of the United Nations and the African Union, on possible Angolan participation in EU Common Security and Defence Policy missions and operations, and on maritime security in the Gulf of Guinea.