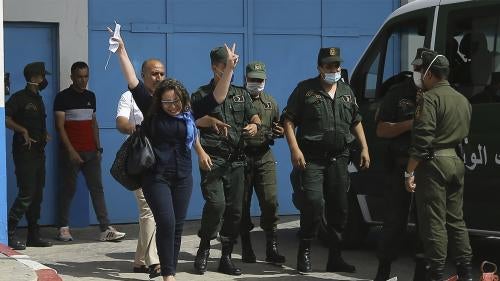 Algerian authorities continued repressing the “Hirak,” a pro-reform protest movement that pushed President Abdelaziz Bouteflika to resign in April 2019. Abdelmadjid Tebboune, opposed by the Hirak, won a presidential election held in December 2019. Despite his promises of “dialogue,” authorities continued to arrest and imprison protesters, activists, and journalists in an attempt to muzzle the Hirak. Under the president’s auspices, a new constitution was approved that offers stronger language on women’s rights, but also restricts freedom of speech and undermines judicial independence.

On December 10, 2019, two days before the presidential election that the Hirak opposed peacefully, the police arrested Kadour Chouicha, vice president of the Algerian League for the Defense of Human Rights in Oran. A court convicted him the same day and sentenced him to one year in prison for “rebellion” and “compromising the integrity of the national territory.” The accusation relied on Facebook posts Chouicha published in November opposing the presidential election, and his participation a week before the vote in a protest outside a hall where a presidential candidate had organized a rally.

Abdelmadjid Tebboune, a former prime minister under Bouteflika, won the election with a historically low turnout. In his inauguration speech, Tebboune stated he was “open to dialogue” with the Hirak and announced that his government would consolidate democracy, the rule of law, and respect for human rights.

On January 2, 2020, about 70 Hirak detainees were released the same day as Tebboune appointed a new government. The National Committee for the Liberation of Detainees, a group tracking the status of imprisoned Hirak protesters, estimated that the releases left about 80 protesters behind bars. Arrests of protesters resumed shortly afterwards, including of a group of 20 protesters on January 17.

On January 13, Anouar Rahmani, a novelist, was charged with “insulting the president of the Republic” over satirical comments about Tebboune that he posted on Facebook. He was granted provisional release and was sentenced on November 9 to a fine of about US$400.

Hundreds of Hirak protesters were arrested throughout the country during protests that occurred in early 2020. While a majority were released the same day, some were tried and sentenced to prison sentences on charges of “illegal gathering,” “harming national unity,” or “demoralizing the army.”

On June 21, a tribunal in Cheraga, a city in the suburbs of Algiers, sentenced Amira Bouraoui, a gynecologist and noted Hirak figure, to a year in prison. She had been prosecuted for “participating in a non-armed gathering,” “offending the president of the republic,” “harming national unity,” and “denigrating Islam.” She was granted provisional freedom on July 2. Her appeals trial was scheduled to resume on November 12.

On September 15, an appeals court sentenced Samir Ben Larbi, a protest leader, and Slimane Hamitouche, the national coordinator of the Families of the Disappeared, to one year in prison, with eight months of the sentences suspended, over their participation in Hirak protests in March. They were released after serving their unsuspended four-month terms.

On March 17, the government banned all street demonstrations before establishing a nationwide lockdown, as a precaution to slow the spread of Covid-19. Hirak leaders themselves had called for a suspension of protests a couple days earlier to protect public health. The government went on to establish a general Covid-19-related lockdown on March 23, first in Algiers, then in the rest of the country. After gradually easing the lockdown starting in May, the police brutally dispersed attempts by Hirak activists to resume demonstrations. They arrested protesters, including in Algiers, Blida, Setif, and Tizi Ouzou in August 21, and in Annaba and Bejaia on September 24.

On April 1, President Tebboune signed a decree pardoning 5,037, apparently in an effort to reduce the prison population in response to the Covid-19 pandemic. The pardon did not include Hirak activists.

On March 24, an appeals court in Algiers sentenced prominent politician and Hirak supporter, Karim Tabbou, to one year in prison. The national coordinator of the unrecognized Democratic and Socialist Union party, Tabbou was charged with “harming national defense,” “harming national unity” and “undermining the morale of the army,” because of peaceful comments he posted on social media. His trial was marred by due process violations, including refusal by the judge to wait for Tabbou’s lawyers’ arrival before starting an audience, even though he had not notified them of it. On July 2, Tabbou was released after spending more than nine months in detention.

On March 27, police arrested in Algiers prominent journalist Khaled Drareni, founder of the Casbah Tribune website, correspondent for French TV5 Monde and Reporters Without Borders. Drareni was accused of “calling for an illegal gathering” and “undermining national unity” for his regular coverage of the Hirak protests, including in his widely followed social media accounts, since they began in February 2019. Authorities had warned him several times before to curtail his coverage, during arrests and interrogations. On August 10, a court pronounced Drareni guilty of both charges and sentenced him to three years in prison, before an appeals court reduced the term to two years on September 15. He has been in prison since his arrest.

On April 27, Walid Kechida, founder and administrator of the satirical Facebook page, Hirak Memes, was arrested in Setif and charged with “contempt and offense to the president” and “undermining the precepts of religion.” He was sentenced to three years in prison on January 4, 2021.

On August 24, Abdelkrim Zeghileche, director of web-based Radio Sarbacane, was sentenced to two years in prison for “harming national unity” and “insulting the head of State,” for a post in which he called for the creation of a new political party. His defense appealed the verdict. Zeghileche has been in prison in Constantine since June 23.

On September 21, the Ministry of Communications banned French TV station M6 from operating in Algeria, one day after it aired a documentary film about the Hirak protests, arguing that the M6 crew had used a “forged filming authorization” to shoot images in Algeria. The ministry’s communiqué announcing the ban added that M6 “harmed the reputation of Algeria (and attempted to) breach the indefectible trust between the Algerian people and their institutions.”

On April 22, the parliament unanimously passed a reform of the penal code, including new laws criminalizing fake news and hate speech. Some offenses, such as “harming public security and the public order” and “harming the stability of State institutions,” which carry sentences of up to three and seven years in prison, respectively, are so vaguely worded that they can be used to criminalize peaceful criticism.

On February 10, the Justice Ministry ordered the apparently punitive transfer of a prosecutor, Mohamed Sid Ahmed Belhadi, to El Oued, 600 kilometers south of Algiers, after Belhadi had urged an Algiers court to acquit 16 protesters, saying they had been prosecuted solely for exercising their right to freedom of assembly. The National Union of Algerian Magistrates labelled the transfer “political punishment and retaliation” for the prosecutor’s remarks.

On November 1, Algerians approved a new constitution with a 66 percent margin in a referendum that drew a historically low turnout of 23 percent.

Amnesty International noted that the constitution “introduces positive language on women's rights,” including the mention that “the State protects women from all forms of violence in all places and circumstances, (and) guarantees the access of victims to shelters, care centers, appropriate means of redress and free legal assistance.”

The president of the republic presides over the “Higher Judicial Council,” a constitutional body that appoints judges and controls their careers through promotions and disciplinary measures, thus undermining its mission to “guarantee the independence of the judiciary.”

Like the previous constitution, the new fundamental law guarantees the right to “receive and impart information,” but subjects the exercise of that right to vague, speech-restricting conditions, such as not infringing on “the requirements of national security.”

Killings of women and girls continued in 2020. Two women, who launched a campaign to raise awareness of such killings, reported that there had been at least 36 femicides in 2020. While Algeria’s 2015 law on domestic violence criminalized some forms of domestic violence, it contained loopholes that allow convictions to be dropped or sentences reduced if victims pardoned their perpetrators. The law also did not set out any further measures to prevent abuse or protect survivors, such as protection orders (restraining orders against abusers).

Article 326 of the penal code, a colonial-era relic, allows a person who abducts a minor to escape prosecution if he marries his victim.

Algeria’s Family Code allows men to have a unilateral divorce without explanation but requires women to apply to courts for a divorce on specified grounds.

Same-sex relations are punishable under article 338 of the penal code by up to two years in prison.

Citing “the fight against illegal migration,” Algerian authorities summarily rounded up and collectively expelled over 17,000, mostly Sub-Saharan African, migrants between January and October 10, including hundreds of women and children and some registered asylum seekers. The expulsions continued even after borders closed in March due to Covid-19. Security personnel separated some children from their families during mass arrests, stripped migrants of their belongings, failed to screen them individually for immigration or refugee status, and failed to allow them to challenge their removal. A little more than half (8,900) were Nigeriens, forcibly repatriated in truck convoys and handed over to the Nigerien military per a 2014 bilateral oral agreement. The Algerian military left the others—over 8,100 migrants of at least 20 different nationalities—in the desert at the border, ordering them to walk to Niger. Some expelled migrants and aid workers assisting them in Niger alleged that Algerian authorities had carried out beatings and other abuses during the expulsions.