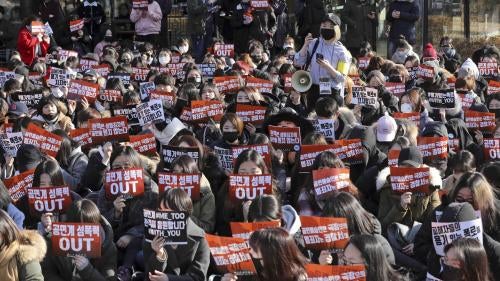 The Republic of Korea (South Korea) is a democracy that generally respects civil and political liberties. However, it maintains unreasonable restrictions on freedom of expression, association, and assembly. Discrimination against lesbian, gay, bisexual, and transgender (LGBT) persons, women, racial and ethnic minorities, and foreigners—especially refugees and migrants—continued to be a major problem in 2018.

South Korea has a free press and a lively civil society. However, successive South Korean governments and large corporations (chaebol) have limited critical scrutiny of themselves through a variety of laws.

Criminal defamation actions can result in up to seven years’ imprisonment and a fine. The law focuses solely on whether what was said or written was in the public interest and does not allow for truth as a complete defense.

The National Security Law criminalizes any dissemination of anything that the government classifies as North Korean “propaganda.” The law imposes severe criminal penalties on anyone who joins, praises, or induces others to join an “anti-government organization,” a term not clearly defined in law.

The government has not ratified the International Labour Organization’s fundamental conventions on freedom of association (C.87), and on the right to organize and collectively bargain (C.98). Government officials are legally prohibited from exercising their right to form a union. The South Korean government refuses to legally recognize the Korean Teachers and Education Workers' Union (KTU). Migrant workers from many countries in Asia flock to South Korea, but continue to face discrimination, harassment, and labor rights abuses.

In May, the government released former Korean Confederation of Trade Unions (KCTU) President Han San-gyun from prison on parole. In June, former KCTU Secretary-General Lee Young-joo was also released with a suspended sentence. Both had been jailed for organizing worker protests in 2015.

The #MeToo movement against sexual harassment and abuse in South Korea caused an outpouring of complaints and resignations, along with one acquittal, although it is too soon to say whether the protests will change a widespread culture of impunity for sexual assault and harassment in the country.

In January 2018, public prosecutor Seo Ji-hyeon accused a former senior Justice Ministry official of sexual harassment, and a steady stream of women followed her example the following month. A number of prominent men, including a theater director, a film director, a politician, a professor, and a Catholic priest, were accused. Some apologized for sexual misconduct and resigned from their positions.

In March, Kim Ji-eun, former secretary to Ahn Hee-jung, governor of South Chungcheong province, accused him of repeatedly raping her. He stepped down as governor and was indicted by prosecutors for abusing his supervisory power to force her into an unwanted sexual relationship. However, the court acquitted Ahn in August, after questioning the credibility of Kim’s statements and determining Ahn did not abuse his power.

Between June and August 2018, tens of thousands of women demonstrated to demand the government take action against spycams in women’s public toilets and other violations of women’s privacy involving cameras.

At time of writing, the Constitutional Court was reviewing South Korea’s laws on abortion. Abortion is considered to be a crime punishably by up to one year in prison or fines up to 2 million won (US$1,794). Healthcare workers who provide abortions can face up to two years in prison. Some exceptions are provided on grounds of rape or incest, the pregnant woman’s health, or presence of hereditary disorders or communicable diseases. Married women must have their spouse’s permission to get an abortion. All abortions are prohibited after 24 weeks of pregnancy.

In February , the UN Committee on the Elimination of Discrimination Against Women reviewed South Korea, and raised concerns regarding the absence of the comprehensive anti-discrimination laws and the low levels of reporting of domestic violence.

Government education guidelines on sexual education discriminate against LGBT youth, by omitting any mention of sexual minorities in the suggested curriculum.

The Constitutional Court is also currently reviewing the 1962 Military Criminal Act (Article 92-6), which punishes sexual acts between soldiers with up to two years in prison under a “disgraceful conduct” clause.

South Korea is a party to the 1951 UN Refugee Convention and its 1967 protocol but continues to reject the vast majority of non-North Korean asylum seekers.

In 2017, the Ministry of Justice reviewed 6,015 asylum seekers’ claims and only accepted 91 as refugees. In some cases, the government issued humanitarian visas to allow continued stay in the country, but in most instances, applicants were rejected outright. Asylum seekers complained about widespread discrimination and lack of basic social assistance.

Between January and May, more than 500 Yemeni asylum seekers arrived on Jeju island, gaining entry through a visa free policy designed to promote tourism. Their presence sparked an intense debate and rise of an anti-refugee movement, with Islamophobic overtones on the island and elsewhere in the country. On June 1, the Moon government excluded Yemen from the visa-free policy.

Between June and July, more than 700,000 people signed a petition calling on the government to revoke the Yemenis’ refugee applications and expel them. Justice Minister Park Sang-ki reaffirmed South Korea’s international obligations toward refugees, but added there would be efforts to root out “fake refugees,” and announced additional penalties for “refugee brokers who promote illegalities.” On October 17, 2018, the government announced a decision denying the refugee claims of 373 Yemeni asylum seekers. Thirty-four were ordered to be deported and plan to appeal, while another 339 received humanitarian visas to remain in the country for a year because their “right to life and personal liberty” could be at risk if they were returned to Yemen.

President Moon’s administration has still not clearly enunciated its policy on North Korean human rights issues in the context of its new diplomatic opening with Pyongyang. South Korea has yet to fully implement the North Korean Human Rights Law that came into effect in September 2016, and failed to establish the North Korea Human Rights Foundation, designed to support research on North Korea’s rights situation and fund groups working on these rights issues. The foundation is also supposed to help the government develop a strategy to promote rights in the North. A Center for North Korean Human Rights Records was created under the Ministry of Unification (MOU) to act as an archive of North Korean human rights violations for possible use in future prosecutions.

South Korea has a mutual defense treaty and close bilateral relations with the United States, yet the country’s continued economic growth is highly dependent on maintaining close trading relationships with countries around the world, including Japan and China—which accounts for approximately one-quarter of South Korea’s exports.

Despite both being democracies and allies of the US, tensions born of historical differences make the Japan-South Korea relationship fraught with tension and divisions. The Singapore summit meeting between US President Donald Trump and North Korean leader Kim Jong-un in June, reached an agreement to start a process of de-nuclearization, but failed to include any human rights issues.

Following the Singapore summit, rapprochement between South Korea and North Korea picked up speed with a focus on de-escalating military tensions and making plans for closer economic cooperation in the event that international sanctions are lifted. For the first time since 2015, reunions of Korean families separated during the Korean War took place in August. However, at the end of the year, tensions grew between Washington—unhappy about progress on denuclearization—and Seoul over the rapidly growing North-South ties.