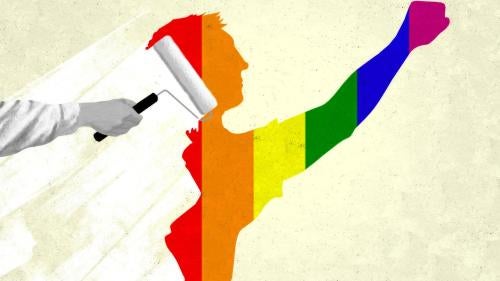 This month we celebrate the 70th anniversary of the Universal Declaration of Human Rights. To mark the occasion, we have asked Human Rights Watch experts to reflect on some of the key human rights challenges in their area of specialty.

Like its buzzword brother “fake news,” “gender ideology” hasn’t taken long crossing borders into nationalist lexicons. The vacuous but dangerous term was adopted  by the Holy See decades ago to refer to a supposed gay and feminist-led movement to subvert traditional families and social values, a reaction against the rights of women and expanding protections for sexual and gender minorities.

Since then, it has developed into a catch-all phrase and short-hand for various anxieties about social change—a Hydra-like global conspiracy myth that, despite being mildly ridiculous and readily exposed, has significant traction.

In recent years, “gender ideology” has been used as a secular rallying cry against same-sex marriage in France, an alliance-building initiative between nationalists and religious conservatives in Poland, a boost to anti-Muslim groups in Austria, a popularity enhancer for Costa Rican presidential hopeful Fabricio Alvarado, and a mobilizing tool against the recent peace accord in Colombia.

Which is a lot. How can one concept have so many purposes?

In France, anti-gender activists tried to frame the marriage equality debate around protection of children within traditional families under threat from a foreign ideology; in Poland, nationalists and conservatives rallied around an idea presented as dangerously cosmopolitan and against church teachings; in Austria, anti-immigrant groups suggested a link between gender progressives and immigrants—both accused of undermining the social fabric; in eastern Europe, anti-gender activists mobilized against the Istanbul Convention on combatting violence against women, because it was said to legitimize transgender identity claims; in Costa Rica, an outlier in the 2018 presidential election did surprisingly well  by conjuring up a threat to the gender order; and in Colombia, citizens opposed to the peace accords suggested that the deal  was the thin edge of a sinister “gender ideology” wedge.

“Gender ideology” has also insinuated itself into mainstream US politics where its deployment is evident in domestic and foreign policy initiatives. In 2016, Roger Severino, then-director of the DeVos Center for Religion and Civil Society at the conservative Washington-based Heritage Foundation, blamed the inclusion of transgender troops on a “radical new gender ideology”; in 2017 Trump appointed him director of the Office for Civil Rights at the US Department of Health and Human Services (HHS). The recently leaked HHS memo that seeks to define gender as binary and immutable, and US attempts to remove the word “gender” from United Nations documents, stem from fears of “gender ideology.”

At its root, the practice of raising the specter of undefined “gender ideology” aims to curtail sexual and reproductive rights and lesbian, gay, bisexual, and transgender (LGBT) equality by playing on people’s fear of social change and claiming a global conspiracy of great influence and scale. Where advances are made in women’s empowerment or in non-discrimination based on sexual orientation or gender identity, those decrying “gender ideology” see dark forces at work to destroy the social order.

Some have referred to the term as “symbolic glue,” or an “empty signifier”: it simultaneously means nothing and everything, but is consistently used to attack feminism, transgender equality, the existence of intersex bodies, the elimination of sex stereotyping, family law reform, same-sex marriage, access to abortion, contraception and comprehensive sexuality education.

Exposing it for what it is—a fantasy of a gender and sexuality conspiracy—and loosening its grip on public debate is crucial in the years ahead to ensure this myth does not shape policy and limit women’s reproductive rights and the rights of sexual and gender minorities.

The anti-gender movement has successfully consolidated disparate constituencies around a flimsy but effective moral panic over gender and sexuality. The women’s movement and LGBT advocates pushing back would do well to learn from their opponents’ playbook—sexuality and gender issues are indeed linked—and mobilize jointly around fundamental rights to dignity, bodily autonomy, access to information, the right to live free from violence and discrimination, and freedom of association and expression.