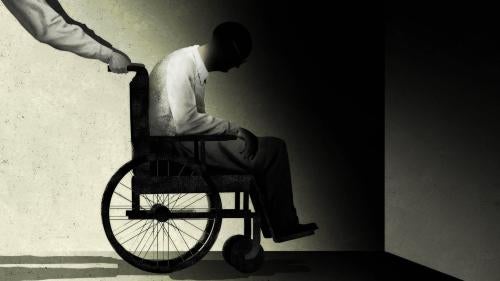 We are living longer than ever. Experts estimate that over one-third of all babies born in wealthy countries in 2012 will live to celebrate their 100th birthday. Life expectancy in every region is increasing. The United Nations calculates that in Asia, where most older people in the world live, nearly 30 years have been added to life expectancy over the past few decades. Africa is projected to experience the same by 2050.

Such a societal shift forces us to consider what it means to live an independent, dignified life as an older person. Should our enjoyment of fundamental human rights diminish with age?  The answer is, “no.”

Older people have the right to live independently in their communities on an equal basis with everyone else, with support if necessary. But right now, ageism, or discrimination against people based on their age, persists across societies and often drives policy decisions that undermine human rights.

For example, older people in many parts of the world are between a rock and a hard place when it comes to where and how to live when they experience physical, emotional, or mental changes that can come with aging: move into an institution or forgo crucial supports at home.

Living in an institution like a nursing facility can have serious repercussions beyond the fluorescent lighting, “privacy” curtains that separate people in the same rooms, and the grim cinderblock walls common to so many. It can risk our human rights to liberty; to informed consent and health; to family and private life; and sometimes even our right to be free from inhuman and degrading treatment. It can jeopardize the freedom and independence that make up who each of us are.

In 2018, for example, Human Rights Watch documented how 179,000 older people living in nursing facilities in the United States, mostly those with dementia, receive dangerous drugs that nearly double their risk of death in a matter of weeks—without their informed consent, or sometimes even their knowledge. In Australia, a Royal Commission of Inquiry into aged care was announced in September 2018, amid deeply troubling media reports about physical and psychological abuse and neglect in nursing facilities. In Argentina, research in 2017 by academics specializing in social protection for older people found that families can force their older relatives into unregulated facilities without their consent.

Being literally locked away from the rest of the world makes older people more vulnerable to being overmedicated and having other rights violated.

The risks associated with institutions are increasingly recognized. In its 1999 decision, Olmstead v LC, the US Supreme Court recognized the right of people with disabilities to live in the least restrictive setting, and that when a person needs some support, living in a facility “severely diminishes the everyday life activities of individuals” and is a form of discrimination when it is unjustified. The United Nations Convention on the Rights of Persons with Disabilities, which entered into force in 2008, and is ratified by 162 countries, requires that states parties guarantee the right to live in the community.

Countries that currently rely heavily on nursing facilities to deliver services to older people should move to ensure older people can also in practice, and in a meaningful way, exercise their right to live at home, with support as necessary. For those countries that have yet to develop services and support systems for older people, the rights-respecting path forward should be to focus on community services from the outset. Getting older shouldn’t mean giving up our dignity, safety, and independence.