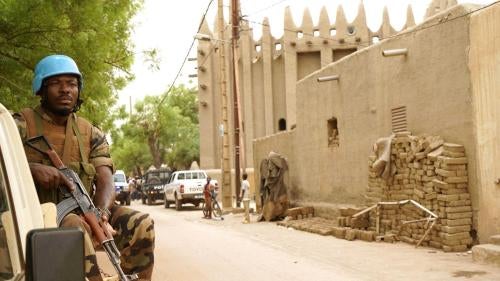 The peace process envisioned to end the 2012-2013 political-military crisis in the north made scant progress, including on disarmament and the restoration of state authority. Rampant banditry continued amid a deepening security vacuum.

In central Mali, Islamist group attacks, including with explosive devices on roadways, increased from 2017, killing many villagers. State counterterrorism operations resulted in dozens of summary executions and ill-treatment.

During 2018, at least 300 civilians were killed in over 100 incidents of communal violence in central and northern Mali. The violence pitted ethnically aligned self-defense groups against communities accused of supporting Islamist armed groups, resulting in the pillage and destruction of dozens of villages and displacement of tens of thousands.

In September, President Ibrahim Boubacar Keita was sworn in for a second term after winning elections marred by insecurity, allegations of irregularities, and some rights violations, including banned demonstrations and the closure of a local radio station.

Little effort was made toward providing justice for victims of abuses, and rule of law institutions remained weak. However, the military opened investigations into allegations of extrajudicial killings by their forces. Humanitarian agencies suffered scores of attacks, mostly by bandits, which undermined their ability to deliver aid.

Islamist armed groups allied to Al-Qaeda, and to a lesser extent the Islamic State, dramatically increased their attacks on Malian security services, peacekeepers, and international forces in northern and central Mali throughout 2018.

Scores of civilians were killed in these attacks, primarily by the indiscriminate use of improvised explosive devices planted on major roads, including an attack in Mopti Region that killed 26. At time of writing, 11 United Nations peacekeepers with the Multidimensional Integrated Stabilization Mission in Mali (MINUSMA) were killed during 2018, bringing the total to 103 killed since MINUSMA’s creation in 2013.

Islamist armed groups continued to threaten, and sometimes kill, villagers deemed to have collaborated with authorities and beat those engaged in cultural practices they had forbidden. They also imposed their version of Sharia (Islamic law) via courts that did not adhere to fair trial standards.

The number of serious violations of international human rights and humanitarian law by state security forces in the context of counterterrorism operations increased significantly in 2018, notably in the first half of the year.

During 2018, Malian soldiers allegedly killed and buried in common graves over 60 men suspected of supporting armed Islamists, while numerous others were subjected to enforced disappearance or torture during interrogations. Numerous men accused of terrorism-related offenses were detained by the national intelligence agency without respect for due process.

The military opened up investigations into at least three incidents, including the extrajudicial killing of 12 suspects near Diourra in April; 12 men in Boulikessi in May; and 25 suspects near Nantaka in June.

Progress in the professionalization of the security forces was also evident in the increased presence of military police responsible for ensuring discipline during military operations, patrols to protect civilians, and operationalization of the Military Justice Directorate in Bamako.

Over 25 children in central and northern Mali were killed and others injured by explosive devices, in crossfire and during intercommunal clashes. Numerous children who fled their villages during attacks by ethnic militias, including Boumbo and Gueourou, remain missing. Thousands of children suffered from malnutrition as a result of conflict and intercommunal violence.

In February, Mali adopted the Safe Schools Declaration, a political commitment to reduce attacks on education. However, over 735 schools remained closed and 225,000 children were denied the right to education because of insecurity and displacement. Numerous teachers were threatened, and schools vandalized, destroyed, or occupied by armed groups.

Judicial authorities made scant progress in investigating over 100 complaints filed by victims of alleged abuses during the 2012-2013 armed conflict, and few investigations into more recent communal violence and security force abuse were opened.

In June, the government passed a “national consensus” law extending amnesty to members of armed groups involved in the 2012-2013 hostilities who had not been accused of violent crimes. Human rights groups called for the postponement of the law’s passage pending impartial investigations into abuses committed since 2012.

The trial of former coup leader Gen. Amadou Haya Sanogo and 17 other members of the Malian security services for the 2012 killing of 21 elite “Red Beret” soldiers was suspended in December 2016.

The Malian judiciary was plagued by neglect and mismanagement, and insecurity led many judicial personnel to abandon their posts in northern and central Mali. Hundreds of detainees were held in extended pretrial detention due to the courts’ inability to adequately process cases.

However, the judiciary made efforts to improve its case management system, increased hearings in conflict-prone areas, and improved prison conditions. The Specialized Judicial Unit against Terrorism and Transnational Organized Crime, created by law in 2013, saw its first case brought to trial; at time of writing, the unit had tried at least six cases.

In October, the cabinet extended for one year the state of emergency, first declared in 2015.

The National Commission for Human Rights (CNDH) made significant progress in fulfilling its mandate. With improved funding and personnel, the CNDH investigated abuses, issued numerous communiques and visited detention centers to advocate on victims’ behalf.

The Truth, Justice and Reconciliation Commission, established in 2014 with a mandate to investigate crimes and root causes of violence dating back to 1960, made meaningful progress. The 25-member commission has taken over 9,300 victim and witness statements, but its credibility has been weakened by the inclusion of nine armed group members and the exclusion of victims’ representatives.

The United Nations, France, European Union, and United States put respect for human rights in Mali more squarely on the agenda in 2018 through numerous public statements denouncing abuse by state forces and non-state armed groups and calls for accountability.

France, together with the US, led on military matters, the EU on training and security sector reform, and the UN on rule of law and political stability.

The operationalization of the 2017 G5 Sahel multinational counterterrorism military force, comprised of forces from Mali, Mauritania, Burkina Faso, Niger, and Chad, suffered delays and its headquarters was destroyed by armed Islamist groups in June. In 2017 and 2018, international donors pledged over US$500 million for the force, including €116 million (approximately $132 million) from the EU.

Operation Barkhane, the 4,000-member French regional counterterrorism force, conducted numerous operations in Mali. In May, the EU Training Mission in Mali (EUTM) and the EU Capacity Building Mission (EUCAP)’s mandate was expanded to include training for the G5 Sahel force.

In January, the UN secretary-general established the International Commission of Inquiry envisioned by the 2015 peace accord to investigate serious violations of international human rights and humanitarian law between 2012 and January 2018.

In December 2017, the UN Security Council approved a resolution enabling MINUSMA to provide some operation and logistical support to the G5 Force, and implementation of the UN’s Human Rights Due Diligence Policy, with support from the OHCHR, is progressing in this context. Such support could effectively make MINUSMA a party to the conflict in Mali and lose peacekeepers’ protection as non-combatants.

In January, Mali underwent its third review under the UN’s Universal Periodic Review mechanism. In March, the UN Human Rights Council decided to continue the mandate of the UN independent expert on Mali for another year. The independent expert visited the country before and after the presidential elections, in June and October.

In August, the UN Security Council renewed for one year the 2017 asset freeze and travel ban against those who obstruct the 2015 peace accord and commit human rights abuses. The August report of the panel of experts strongly condemned rights violations by both state and non-state actors, but the Security Council has failed to sanction anyone for alleged human rights violations and abuses by state and non-state actors.

The International Criminal Court Prosecutor’s Office continued its Mali investigation and in March, issued an arrest warrant for former Ansar Dine leader, Al Hassan Ag Abdoul Aziz Ag Mohamed Ag Mahmoud, for crimes against humanity and war crimes in Timbuktu in 2012 and 2013. However, it had not yet sought arrest warrants for any state actors at time of writing.