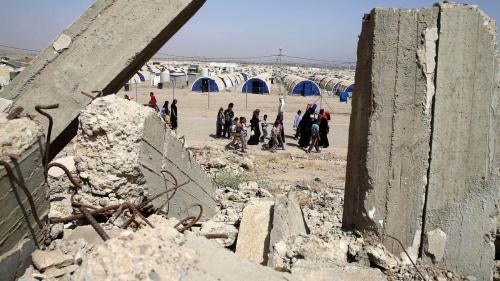 While many of the active battlefronts between Iraqi forces and the Islamic State (ISIS) had quieted by 2018, military operations continued against sleeper cells and rural ISIS holdouts. ISIS continued to capture and extrajudicially kill civilians and Iraqi armed forces throughout the year. Under the guise of fighting terror, Iraqi forces arbitrarily detained, ill-treated and tortured, and disappeared mostly Sunni men from areas where ISIS was active and failed to respect their due process and fair trial rights. The years of fighting across the country left at least 1.8 million Iraqis still displaced in 2018. Iraqi authorities imposed security measures against individuals and families perceived as having relatives who supported ISIS in the past in what amounted to collective punishment.

Other human rights violations persisted, including violations of freedom of assembly and expression, women’s rights, and the continued use of the death penalty.

May parliamentary elections led to Adil Abd Al-Mahdi taking up the post of prime minister from Haidar al-Abadi in October and forming a new government.

In 2018, ISIS fighters captured and extrajudicially killed civilians, often targeting community leaders and Iraqi armed forces. They carried out dozens of explosive attacks on civilian-populated areas. Under international law some of the brutal crimes perpetrated by ISIS since 2014 amounted to war crimes and may amount to crimes against humanity or genocide. In 2018, Iraq failed to pass legislation to make war crimes and crimes against humanity specific offenses under Iraqi law.

Iraqi judges instead prosecuted ISIS suspects with the single charge of ISIS affiliation, under Iraqi counterterrorism legislation. The trials were generally rushed, based on a defendant’s confession, and did not involve victim participation. Authorities did little to protect, gather, and use in criminal prosecutions evidence found at mass gravesites left by ISIS.

The Iraqi government and Kurdistan Regional Government (KRG) conducted thousands of trials of ISIS suspects without a strategy to prioritize the worst abuses under Iraqi and international law.

Based on a United Nations Security Council resolution adopted in September 2017, a UN investigative team was created to document serious crimes committed by ISIS in Iraq. By the end of 2018, the team had yet to properly launch investigations in Iraq.

Iraq passed Law No. 20, Compensating the Victims of Military Operations, Military Mistakes and Terrorist Actions in 2009, creating governmental commissions to compensate Iraqis affected by terrorism, military operations, and military errors. Compensation commissions in areas that fell under ISIS control in 2014 have received thousands of compensation requests but have yet to pay out any claims from 2014 onwards.

Iraqi forces arbitrarily detained some ISIS suspects, predominately Sunni men, many of them for months. According to witnesses and family members, security forces regularly detained suspects without any court order, arrest warrant, or other document justifying arrest and often did not provide a reason for the arrest.

Authorities systematically violated the due process rights of ISIS suspects and other detainees, such as guarantees in Iraqi law for detainees to see a judge within 24 hours, to have access to a lawyer throughout interrogations, and to have families notified of their detention and to able to communicate with them.

Judges also ignored claims made by foreign women charged with ISIS affiliation for having entered Iraq and lived in ISIS-controlled areas that their husbands brought them against their will. Children above the ages of nine were also prosecuted for illegal entry into the country despite statements in court that their parents brought them to Iraq without their consent.

Despite requests, the government of Iraq failed to release information on which security and military structures have a legal mandate to detain and in which facilities.

Torture and Other Forms of Ill-Treatment

Detainees in Nineveh gave graphic accounts of torture during interrogations in Mosul’s prisons under the control of the Ministry of Interior, in some cases leading to the deaths of detainees. These allegations are consistent with reports of widespread use of torture by Iraqi forces as a method to extract confessions instead of carrying out robust criminal investigations. Authorities detained ISIS suspects in overcrowded, and in some cases inhumane, conditions.

Despite commitments by the prime minister in September 2017 to investigate allegations of torture and extrajudicial killings, authorities seemingly took no steps to investigate these abuses.

In 16 terrorism trials Human Rights Watch monitored in 2018, defendants alleged torture, including to extract confessions, but most judges did not take any action to investigate the allegations, and in only one instance was an officer investigated and sanctioned.

The International Center for Missing Persons, which has been working in partnership with the Iraqi government to help recover and identify the missing, estimates that the number of missing people in Iraq could range from 250,000 to 1 million people. Since 2014,

Iraqi military and security forces have forcibly disappeared predominately Sunni Arab males in the context of counterterrorism operations, as well as in other cases. A range of military and security actors are responsible for the enforced disappearances, many of which took place at checkpoints or the homes of suspects. Despite requests from the families of the disappeared for information, Iraqi authorities have given none. Authorities did not respond to queries from Human Rights Watch as to which channels were available to families searching for loved ones. An initiative in 2015 and in 2017 to pass a new law that prohibits enforced disappearances as a distinct crime has been stalled in parliament.

Iraqi families with perceived ISIS affiliation, usually because of their family name, tribal affiliation, or area of origin, were denied security clearances required to obtain identity cards and all other civil documentation. This impacted their freedom of movement, right to education, right to work, and right to apply for welfare benefits and obtain birth and death certificates needed to inherit property or remarry.

Denial of security clearances also blocked families with perceived ISIS affiliation from being able to make claims to the governmental commission to compensate Iraqis affected by terrorism, military operations, and military errors; to bring court cases; or to challenge the seizure of property by Iraqi security forces or other local families. In Nineveh, families with perceived ISIS affiliation also said they were sometimes denied access to humanitarian assistance, usually by community leaders.

Lawyers providing legal services to ISIS suspects and, their families, or those perceived to be, reported that security forces threatened, and in some instances, detained, them for providing these services.

Despite joint government and humanitarian efforts to facilitate the return of displaced persons to areas once held by ISIS, local decrees and other preventative measures prevented families with perceived ISIS affiliation from returning home to some areas, including in Anbar, Diyala, Nineveh, and Salah al-Din. In some instances, these families were forced from their homes into camps by Iraqi armed forces or were forced into secondary displacement.

Protests that began in central and southern Iraq in July demanding improved access to water, jobs, and electrical power turned violent in some areas, particularly in Basra, with Ministry of Interior forces injuring dozens of protesters, and killing a few through their excessive use of force when trying to disperse crowds and detain protesters. The protests in Basra continued through September, with violence increasing on both sides leading to protesters burning down buildings and leaving at least 15 dead.

Human Rights Watch and other organizations documented a system of organized rape, sexual slavery, and forced marriage by ISIS forces of Yezidi women and girls. However, no ISIS member has been prosecuted or convicted for those specific crimes.

Iraq’s criminal code does not prohibit same-sex sexual relations, although article 394 makes it illegal to engage in extra-marital sex. Paragraph 401 of the penal code holds that any person who commits an “immodest act” in public can be put in prison for up to six months, a vague provision that could be used to target sexual and gender minorities, although such cases have not been documented.

Iraq has long had one of the highest rates of executions in the world, ranked in the top four alongside China, Iran, and Saudi Arabia. Iraqi law permits the death penalty against adults for a range of crimes. Iraqi authorities handed down hundreds of death sentences to those convicted under counterterrorism legislation and carried out executions without publicizing any official numbers or sharing this information with international actors. After an ISIS attack in June, the prime minister called for the "immediate" execution of all convicted "terrorists" on death row, after which authorities publicly announced the execution of 12 men.

In the Kurdistan Region of Iraq, the KRG implemented a de facto moratorium on the death penalty in 2008, banning it “except in very few cases which were considered essential,” according to a KRG spokesperson. The Iraqi criminal code prohibits the use of the death penalty against children.

While the United States-led Global Coalition against ISIS continued its military operations in Iraq, Turkey increased its operations in northern Iraq against the armed Kurdistan Workers’ Party (PKK). The PKK, an outlawed armed group active in Turkey, has long maintained a presence in northern Iraq near the Turkish, Iranian, and Syrian borders.

Turkish forces have conducted operations against the PKK in Iraq at various times for over two decades. Starting in March, Turkish forces extended their presence into northern Iraq by at least 30 kilometers, establishing multiple outposts, including in rural areas of Dohuk and Erbil governorates. In March and June, two Turkish military operations in the area killed five non-combatants in attacks where there were no apparent military objectives.

The US-led Global Coalition against ISIS, including Australia, Belgium, Canada, Denmark, France, the Netherlands, and the United Kingdom, as well as Iranian and Turkish forces, have supported Iraqi and Kurdish troops in the war against ISIS since 2014. This support includes billions of dollars spent training, equipping, and supporting a range of Iraqi military and security forces. The countries were generally vague as to what they published publicly on the scale, nature, and parameters of their assistance in 2018, as well as the exact recipients.

In 2018, Iraq also purchased weapons worth millions of dollars through foreign military sales from US-coalition members as well as Iran and Russia reportedly.

In February, North Atlantic Treaty Organisation (NATO) defense ministers agreed to a bigger “train-and-advise” mission in Iraq. The US-led coalition has also committed to staying in Iraq indefinitely, and continued to carry out military operations against ISIS targets in Iraq.

In light of the rampant impunity of Iraqi security forces, Human Rights Watch called on foreign governments to end military assistance to units involved in laws of war violations and explain publicly any suspension of military assistance, including the grounds for doing so.

In January, European Union foreign ministers adopted a new EU strategy on Iraq that seeks to address Iraq’s humanitarian, stabilization, reform, and reconciliation needs. In July, the European Parliament gave its consent to the EU-Iraq Partnership and Cooperation Agreement.

In July 2018, US Secretary of State Mike Pompeo held his first ever ministerial, which focused on religious liberties. Senior US government officials highlighted the plight of Christians, Yezidis, and other religious minorities in Iraq and pledged $17 million for landmine clearance in the Nineveh plains.