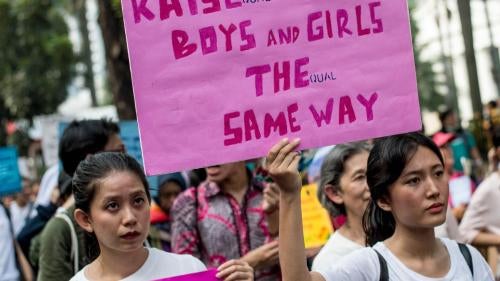 Indonesian President Joko “Jokowi” Widodo’s administration took small steps in 2018 to protect the rights of some of Indonesia’s most vulnerable people. In April, Jokowi announced that he would ban child marriage, but failed to provide a timetable for abolition. In August, the government moved eight Moluccan political prisoners more than 2,000 kilometers from a remote high-security prison in Nusa Kambangan to a prison much closer to their families.

Although Jokowi issued a plea for religious tolerance in his annual State of the Nation address on August 16, his administration has failed to translate his rhetorical support for human rights into meaningful policies during his first term in office. Religious and gender minorities continue to face harassment. Authorities continue to arrest, prosecute, and imprison people under the blasphemy law. Indonesian security forces continue to pay little price for committing abuses, including past unlawful killings of Papuans, and authorities continue to place far-reaching restrictions on foreign journalists seeking to report from Papua and West Papua provinces. There is little sign that Jokowi is willing to extend the necessary political capital to make human rights a meaningful component of his campaign for re-election in 2019.

The surge in police killings of alleged criminal suspects in the run-up to the Asian Games in Jakarta in July followed public expressions of support by senior officials for Philippines-style “drug war” methods and explicit police authorization for use of deadly force against criminal suspects who resist arrest. The Jokowi administration also publicly backpedaled from a commitment to provide accountability for the mass killings of 1965-66. Following a 2016 deluge of government-driven anti-lesbian, gay, bisexual, and transgender (LGBT) rhetoric, authorities in 2018 continued to target private gatherings and LGBT individuals—a serious threat to privacy and public health initiatives in the country.

In 2018, Indonesian courts sentenced six individuals to prison terms of one to five years for violations of the country’s dangerously ambiguous blasphemy law. They included an ethnic Chinese Buddhist in Tanjung Balai in North Sumatra who received an 18-month prison sentence in August for complaining about noise levels at a local mosque. The previous month, the Supreme Court dismissed a legal challenge to the blasphemy law filed by the Ahmadiyah religious minority.

In March, a Christian association in Jayapura, the capital of Papua province, issued a stark 14-day ultimatum to municipal authorities: dismantle the minaret of the city’s Al-Aqsa mosque by the end of February or the group would “take their own action.” The group did not take any action, however, when the 14-day period passed.

On March 26, Indonesia’s Supreme Court rejected former Jakarta Governor Basuki Purnama's appeal of his 2017 blasphemy conviction for which he is serving a two-year prison sentence.

Journalist Muhammad Yusuf died on June 10 in police custody in Kotabaru, South Kalimantan, while being detained for criminal defamation. Yusuf’s family members alleged that his death was the result of intentional police neglect to provide him medical attention for “breathing difficulties.”

In September 2018, the Bireuen Regency government banned unmarried couples from sitting at the same table in restaurants. That prohibition was in a Sharia (Islamic law) regency circular that also forbids such businesses from serving female customers after 9 p.m. or hiring LGBT people as servers.

In April, Jokowi announced that he was preparing a presidential decree that would ban child marriage. Indonesia’s 1974 Marriage Law allows girls to marry at 16 and men to marry at 19 with parental permission. Around 14 percent of girls in Indonesia are married before age 18, and 1 percent marry before age 15. No timetable was mentioned for abolition.

In July, Indonesia's official Commission on Violence against Women sought assistance from the Presidential Executive Office in combating discrimination against women. The commission has been advocating for the revocation of discriminatory Sharia-based regional ordinances proliferating nationwide.

In March, the mysterious death in police custody of Rico Ayomi, a 17-year-old student, for alleged “alcohol poisoning” underscored the lack of accountability for deaths of Papuans by police. Security forces have been responsible for an estimated 95 deaths in 69 incidents from 2010-2018 in which 39 were related to peaceful political activities such as demonstrations or raising the Papuan independence flag. No security force personnel have been convicted in civilian courts for those deaths, with only a handful of cases leading to disciplinary measures or military trials.

Two foreign journalists were harassed in Papua in 2018 for alleged “illegal reporting.” They include BBC correspondent Rebecca Henschke, arrested in February, and Polish freelancer Jakub Fabian Skrzypski, arrested in August. Henschke, who had a legitimate travel document, was questioned for a total of 17 hours before being freed. Five Papuan men, including a graduate student, were arrested separately in the Skrzypski case (Skrzypski did not have a travel permit for Papua).

In June, then-UN High Commissioner for Human Rights Zeid Al Hussein said he was “concerned that despite positive engagement by the authorities in many respects, the Government’s invitation to my Office to visit Papua—which was made during my visit in February—has still not been honored.”

Indonesian authorities continued to fail to uphold basic rights of LGBT people, fueling a spike in the country’s HIV epidemic. Police arbitrary and unlawful raids on private LGBT gatherings, assisted by militant Islamists, has effectively derailed public health outreach efforts to vulnerable populations. HIV rates among men who have sex with men (MSM) have consequently increased five-fold since 2007 from 5 to 25 percent.

In January 2018, police and Sharia police in North Aceh detained 12 transgender women and forced them to disrobe. National Police Chief Tito Karnavian ordered an investigation into the raids.

A criminal code bill, designed to replace the 1918 Dutch-colonial era criminal code, underwent several rounds of debate and revision in parliament. Some lawmakers pushed to include criminal sanctions for adult consensual same-sex conduct—a law Indonesia has never previously had—justifying it on the grounds that such provisions “protect” LGBT people from vigilante violence. The government representative on the drafting committee said he opposed criminalizing same-sex conduct, but at time of writing the process had stalled and language referring to undefined “deviant sex” remained in the draft.

On May 13-14, three Indonesian families intentionally used their own children, who were between the ages of 9 and 18, to detonate explosives or to accompany their parents carrying out suicide attacks against three churches in Surabaya. The bombings killed at least 12 people, plus 13 attackers, and wounded at least 50 others. The families were linked to the Jamaah Ansharut Daulah, an affiliate of the Islamic State, which claimed responsibility for the bombings.

Children in Indonesia continue to work in hazardous conditions on tobacco farms, where they are exposed to nicotine, toxic pesticides, and other dangers. Though the government bans hazardous work for children under 18, authorities have not changed Indonesian labor law or regulations to explicitly prohibit children from handling tobacco.

The government has taken promising steps to end shackling, reducing the number of people with psychosocial disabilities who are shackled or locked up in confined spaces from nearly 18,800, the last reported figure, to 12,800 in July 2018, according to government data.

The Ministry of Health rolled out a community outreach program to collect data, raise awareness, and provide services on 12 issues, including mental health. As of November 2018, the program had reached 21.5 million households but the data collected indicates that only 17 percent of people with psychosocial disabilities surveyed had received access to mental health services. Despite the progress, people with psychosocial disabilities continue to be detained in institutions where they face abuse, including physical and sexual violence, involuntary treatment, restraints, and forced seclusion.

In February, the Indonesian government awarded Philippine National Police Director-General Ronald dela Rosa its highest honor. Rosa has been implicated in possible crimes against humanity for inciting and instigating killings linked to the Philippine government’s “war on drugs” that killed more than 12,000 people since June 2016.

Jakarta police data indicate that police killed 11 suspects and wounded 41 others from July 3 to July 12 for “resisting arrest” during an anti-crime campaign linked to the city’s preparations to host the 2018 Asian Games in August. The surge in killings followed public expressions of support by senior officials for abusive “drug war” methods promoted by Philippine President Rodrigo Duterte and explicit police authorization for use of deadly force against criminal suspects who resist arrest.

In August, Indonesia’s national police chief, Gen. Tito Karnavian, announced that police would reopen their investigation into the murder in 2004 of human rights defender Munir Thalib. Investigations and prosecutions in the case to date have failed to uncover the full circumstances of Munir’s killing or target the most senior officials believed responsible.

In January, a court in eastern Java sentenced Heri Budiawan, a leader of the grassroots environmental group Banyuwangi People’s Forum, to 10 months’ imprisonment for violating Indonesia’s draconian anti-communism laws. Prosecutors alleged that Budiawan and his supporters displayed banners bearing the hammer and sickle symbol during an April 4, 2017 protest against pollution by a local gold mine.

In February, with World Bank support, Jokowi launched the One Map program to register all land in Indonesia, including disputed areas, by 2025. In September, he announced a moratorium on oil palm plantations, instructing his ministries to stop issuing new plantation permits on state forests till 2021. Many indigenous and peasant rights groups argued that moratoriums and land certification alone are not sufficient to resolve land disputes. In 2017, the Agrarian Reform Consortium documented 659 land-related conflicts over a total area of 520,490 hectares, affecting more than 650,000 households. Land clearing for plantations has resulted in loss of forest cover and forest fires that both cause air pollution and aggravate climate change.

In January, Indonesia’s Defense Minister Ryamizard Ryacudu and US Defense Secretary James Mattis discussed the possible resumption of US assistance to Indonesia’s Kopassus special forces. Assistance to the unit had been halted in large part because of the US “Leahy Law,” which bars US assistance and training to foreign military units known to have committed gross human rights abuses unless the government has taken steps to address the abuses and hold those responsible to account.

UN Special Rapporteur on the Right to Food Hilal Elver had her mission to Indonesia in April 2018, reporting that “over 80 million” Indonesians remain vulnerable to food insecurity in certain areas.

On April 28, Jokowi met Myanmar President Win Myint and asked him to implement the recommendations of a commission led by the late United Nations Secretary-General Kofi Annan to resolve the humanitarian crisis in Myanmar’s Rakhine State.

On May 31, Zulfiqar Ali, a Pakistani citizen, died of cancer in a Jakarta prison, spending his final days on death row despite promises by leaders of both Pakistan and Indonesia to return him to his family in Lahore.

In September, the Indonesian government pledged it would “not interfere” in the Chinese government’s arbitrary detention of more than 1 million Uighur Muslims in “re-education” camps in China’s Xinjiang region. The government expressed hope that China would “uphold the rule of law and human rights” despite mounting evidence of egregious ongoing abuses in Xinjiang.