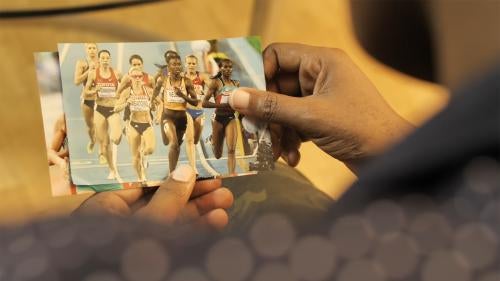 (Geneva, December 4, 2020) – Women track and field athletes, largely from the Global South, are abused and harmed by “sex testing” regulations, Human Rights Watch said in a report released today. The regulations target women in running events between 400 meters and one mile, and compel women they target to undergo medical interventions or be forced out of competition.

South Korea was my first World Championship. I was very, very happy to go on with the sport and going to another level.

Preparing for London Olympics // me, plus my coach, // we were working very hard // so that our dreams come true. Because our dream was to reach the finals. As long as we reached to the finals, anything can happen then.

Some few weeks to the departure for the London Olympics that’s the time when I received a call from my international manager telling me // my blood sample, they're having some problem, technical problem and you can't go for the competition.

Annet’s natural testosterone level was higher than the regulated range for women athletes.

My local officials from my federation told me me that // you have to stay at home, not moving. And if anyone asks you tell them that you have an injury, whereby I was a person who was injury free, I was very normal, I wasn't sick.

One official from the IAAF [International Association of Athletics Federations] // he tried to reach me and after some few weeks I think, they had me travel to Nice for a body checkup. Like measuring my whole body and putting me to a machine, just like scanning my whole body and getting more other blood samples from me.

Later in Kampala, Annet underwent a procedure that she thought would mean she could run again.

Going to the doctor with an executive from the [national] federation because she was with me, escorting me, going to the hospital, they took me to the operation room. // And they said that they are going to use the injection thing, whereby by waking up // I'm finding myself I'm having cuts. //

I said, whoa! They have done something which we didn't agree on. And really, I was so scared.

The procedure is irreversible and causes sterilization.

The people who are there with me, taking me to the hospital, who wanted me to do such. After the operation, no one come back to me to see what really... No one came in to do a follow-up.

No one explained to me what's really the truth. It something which was just… Making me to go in their trap. I call it trap because it was a trap.

Took me seven years without nothing. As in, they didn't give me straight information that after the surgery, you have to go for hormone therapy throughout the whole of your life. // Really that was so hard on me. // For seven years no one's coming to look for you, for seven new years no one is minding to know where you are. It was really a strange life.

As soon as you pass here, you start slowing down the pace.

Sort of focus on the stride length.

Keep the body moving, you know what I mean? That you feel that the body is moving at the same pace.

Testosterone regulations in sport cause significant harm and disproportionately impact women from the Global South.

Why are they focusing too much to people of the Southern continent? That shows that [there’s] discriminating and racism in the sport. Because all of us we are human beings, and we are females. What I can say, let them stop taking people's or playing on people's bodies. Making people to be guinea pigs and doing their research on human beings and violating human rights.

My dream at first was taken away from me. But with God, I trust that it will come back to me. And now I came back for training and I’m already in the process. I’m working for it again.

“They’re Chasing Us Away from Sport”