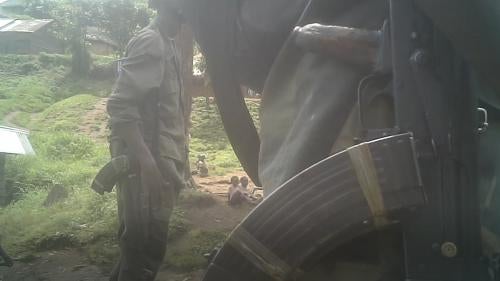 Congolese authorities have not arrested a rebel commander wanted for multiple crimes under a June 2019 warrant even as his forces have continued to carry out summary killings, rapes and sexual slavery, extortion, and forced recruitment of children.

Voices of villagers
They got here today without confrontation with government forces. // They look like government soldiers!

Narrator:
These men in uniforms carrying weapons aren’t Congolese soldiers but rebel fighters from the  NDC-R – one of the most powerful armed groups in eastern Congo.
The NDC-R has been responsible for countless human rights abuses, including killings, rapes, extortion, and the recruitment of child soldiers.
In 2019, the Congolese authorities ordered the arrest of the group’s brutal leader, Shimiray Guidon. But Guidon remains active on the battlefield.
Government forces have begun military operations against his faction, a new development. Human Rights Watch has obtained footage showing that until recently Congolese army units were actively supporting Guidon’s group, not opposing it.

Congolese army soldier
We believe that they [NDC-R fighters] have a good heart. // Reserve! They're like government reserve soldiers. That's the truth.

Narrator:
Here, NDC-R fighters are collecting illegal “taxes” from civilians – they’ve imposed a taxation racket in areas they control. Fighters are also seen forcing people into hard labor.
Punishments, such as severe beatings, are used against those who refuse to comply.

Narrator:
Despite these serious crimes, networks in the army continued to protect Guidon and support his fighters, supplying them with guns, ammunition and equipment.

NDC-R Commander:
When it comes to ammunition, it's not a problem. We just need to make a phone call, and an [army] convoy comes over.

Narrator:
But the group has now split. Heavy fighting erupted in July as Guidon’s deputies broke away from him, and both factions have been at war since then, endangering the lives of civilians.

TEXT:
The Congolese government should step up efforts to arrest Guidon and bring him to justice.
Army officers who have supported the NDC-R should be suspended and appropriately disciplined or prosecuted.