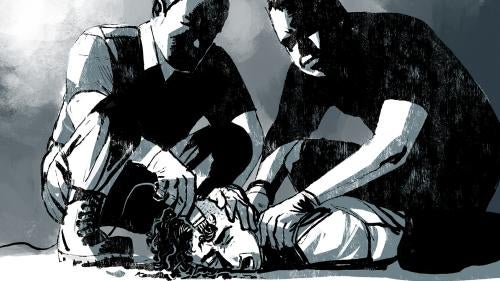 (Beirut, October 1, 2020) – Egyptian police and National Security Agency officers arbitrarily arrest lesbian, gay, bisexual, and transgender (LGBT) people and detain them in inhuman conditions, systematically subject them to ill-treatment including torture, and often incite fellow inmates to abuse them, Human Rights Watch said today. Security forces routinely pick people off the streets based solely on their gender expression, entrap them through social networking sites and dating applications, and unlawfully search their phones. Prosecutors use this content to justify prolonged detentions as they rubber-stamp police reports and bring unjustified prosecutions against them.

I was sitting in the car waiting for a friend of mine when ten men came out of the blue and started hitting the car and hitting me on the shoulder, asking for my ID, without even identifying themselves.

Ten days earlier, I had raised the rainbow flag at a Mashrou’ Leila concert.

The band speaks mainly about the oppression of LGBT people in the Middle East and its lead singer, Hamed Sinno, is openly gay.

My friend Sara Hegazy was also there and was one of those who raised the rainbow flag.

The idea of raising rainbow flags in the Cairo sky in front of 35,000 people without any fear, is maybe the greatest thing I can think of.

After that, the Egyptian government launched the biggest crackdown on the LGBT community.

It resulted in the arrest of 75 LGBT people from their homes and through dating apps.

I was interrogated 3 different times in the building of the National Security.

They asked me questions like, “Are you a faggot?”

“Are you a communist, are you one of the revolutionary socialists?”

Homosexuality is not explicitly criminalized in Egyptian law, but I was accused of joining banned groups and promoting debauchery.

Solitary confinement cells were underground. There was nothing in the cell, no ventilation, no light, no bed.

They brought me a dirty blanket, to glasses of tap water, and some dirty bread.

They closed the cell door, and I cried until I slept, wishing I wouldn’t wake up the next day.

The officers told the other inmates that I was accused in the Mashrou’ Leila case, and that I’m the gay one in solitary confinement. So, I started to receive threats of rape.

I met Sara during the State Security prosecution. They handcuffed us together. Sara said to me, “I want to hold your hand.”

We sat on the ground and sang the Mashrou’ Leila song “Wa Nueid.” It was the only song that I know by heart, and it was proper for the situation.

After 3 months, the lawyers appealed the prison sentence I was released with Sara on bail of a thousand pounds each.

The case is remains open. I cannot return to Egypt, because if I did, I would be arrested again in the airport.

In May 2018, I left Egypt and traveled to Canada where I met Sara when I arrived at the airport.

She took care of me as if I was her son. She helped me settle in, and with my asylum procedure. She helped me find a place to live, introduced me to people.

But the trauma from our experience continued to weigh heavily on Sara.

Finally, I say to the Egyptian government that I will continue to raise the rainbow flag, I will continue to speak up for the rights of LGBT people and for the oppressed and those who have no voice, so that Sara’s memory and struggle is honored the way it should be

[Text on screen]
The Egyptian government should end the persecution of LGBT people immediately.

LGBT People in Egypt should be allowed to express themselves and be free from punishment for doing so.