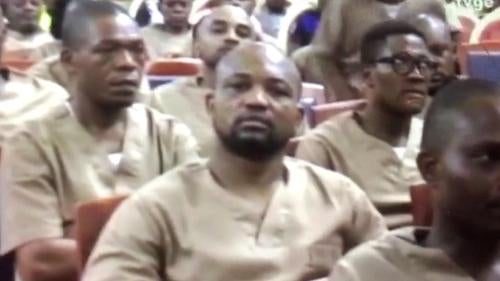 (Washington, DC) – An Equatorial Guinea court’s conviction of 112 defendants on May 31, 2019, in a trial rife with due process violations, including confessions extracted through torture, represents a gross miscarriage of justice, Human Rights Watch said today in releasing a video about the trial.

The American Bar Association’s Center for Human Rights, as part of the Clooney Foundation for Justice’s TrialWatch Project, sent five monitors to observe the trial. Juan Mendez, the former United Nations special rapporteur on torture and member of the TrialWatch Advisory Board, prepared a public preliminary report based on their notes, which describes a litany of abuses including coerced confessions and due process violations before and during the trial. The video includes interviews with Mendez and two lawyers who observed parts of the trial.

“Independent lawyers observing the trial described it as a kangaroo court,” said Sarah Saadoun, business and human rights researcher at Human Rights Watch. “The fact that Equatorial Guinean authorities feel free to sweep dozens of people off the street and sentence them to decades in prison with no more evidence than a confession extracted through torture, should trigger outrage and alarm bells.”

The defendants were among approximately 130 people arrested following a coup attempt against President Teodoro Obiang that took place in December 2017. A panel of eight judges convicted them following a trial that began on March 22, 2019 at the Bata Provincial Court and handed down sentences ranging from 3 to 97 years, with 25 defendants receiving sentences of more than 70 years. The prosecution offered little or no evidence to support its case against most defendants; in some cases, it presented confessions that defendants testified in court were obtained under torture. The court, which included two judges appointed mid-trial by President Obiang, placed severe restrictions on the defense, including prohibiting them from presenting evidence of torture and curtailing lawyers’ access to clients.

The government arrested around 30 men from Chad, Cameroon, and Central African Republic in December 2017, alleging they were mercenaries who had crossed the border into Equatorial Guinea with ammunition to stage a coup. The state television station reported that the military killed one person in clashes preceding the arrest.

Following the initial arrests, the government arrested dozens more people it alleged had participated in the coup attempt, including Equatorial Guineans. The trial consisted of approximately 130 defendants, including 55 tried in absentia, but the exact number of defendants, and who was ultimately tried, is difficult to ascertain as official court documents vary. According to one of the trial monitors, many of the defendants maintain they are the relatives of those the government suspects were involved, and defense attorneys allege their clients were targeted for political reasons and had nothing to do with the coup attempt.

Throughout their detention, defendants were held incommunicado, without access to their lawyers or relatives. They described squalid and overcrowded prison conditions. Many alleged they were subjected to torture until they confessed, including being beaten, tied up, subjected to electric shocks, and denied access to bathrooms and medical help.

One defendant, Desiderio Ondong Abeso, testified that he was “tortured like a crocodile” with his arms tied behind his back. Two defendants died while in detention. A lawyer who observed the trial told Human Rights Watch that authorities have not provided an explanation for their deaths and their lawyers contend it was as a result of torture.

The judges prohibited defense attorneys from raising torture allegations in the court, the monitors who observed the trial said, and imposed such severe restrictions on them as to effectively deny them any ability to defend their clients. They were first allowed to meet with their clients only 72 hours prior to the trial and were given limited access to case files.

Prosecutors had charged all the defendants with identical crimes and introduced new charges 11 days before the end of the trial. The judges permitted defense attorneys to speak for only a few minutes during the examination of defendants and severely limited them from raising objections or cross-examining the prosecution’s witnesses.

Political and military interference was apparent from the outset of the trial. On April 1, two weeks after the trial got underway, the president issued an executive decree appointing two new judges and two new prosecutors, all from the military. A week later, the monitors observed a military official in the audience who was relaying messages to the judges and the prosecution.

“The government has every right to try those involved in a coup attempt, but not carte blanche to torture, throw away due process rights, or target political opposition,” Saadoun said. “The abuses observers documented fit a pattern of Equatorial Guinean courts trampling on rights that demands the attention of the United Nations and African Commission on Human and Peoples Rights.”